Warren Haynes, A Man of All Seasons and Many Reasons 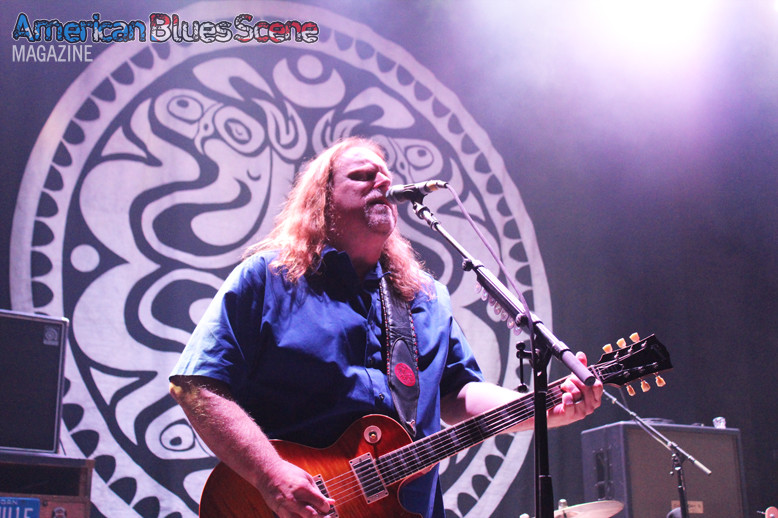 To blues fans, the dissolution of the Allman Brothers Band is a monumental milestone on the musical calendar and a huge loss to the genre. Forty five years after first putting their souls on the line with improvising guitar flourishes between the late Duane Allman and Dickey Betts, the current iteration of the group brought the curtain down at a final concert at New York’s Beacon Theatre a day before the 43rd anniversary of Duane’s death on October 28, 2014. For the last several years it’s been Derek Trucks and Warren Haynes exchanging classic licks.

Specifically, he’s on tour with Gov’t Mule, a band he has run concurrently when he was not touring with the Allman Brothers for the last 17 years (except for one three-year interruption). Between Black Friday, 2014 and January 15, 2015, Gov’t Mule is releasing four live recordings in various formats covering the Rolling Stones (Stoned Side of The Mule Vol. 1) and Pink Floyd (Dark Side of the Mule: Vol. 1), plus Dub Side of the Mule with guest Toots Hibbert of Toots and the Maytals and Sco-Mule recorded with jazz master John Scoffield at two 1999 concerts in Georgia.

“My influences are definitely in the hundreds, many hundreds I would think,” says Haynes about the eclectic nature of the new releases. “I’m always of the opinion you look for the best in every genre of music and expose yourself to it and study it and to whatever extent it happens in your own vocabulary is kind of irrelevant. It’s for your own benefit and elevation that you do that.”

Both in his improvising on classic Allman Brothers songs and in the prolific output of Gov’t Mule, Haynes has always been comfortable creating both original songs and covering others’ chestnuts. “An artist can put their own stamp on it, and that usually comes about automatically from the artists just being themselves, but it’s hard for me to be objective about that. It’s easier for me to be objective hearing somebody else do it.”

Gov’t Mule does a particularly tasty arrangement of the Stones’ “Angie” on Stoned Side of Mule. “You have to resist any temptation to sing it at all like Mick Jagger because that’s crossing the line. On some of these songs the original version is imbedded in our heads. So you kind of allow yourself or force yourself to sing it in a way that doesn’t sound forced, and with that song it takes on another complexion or texture, but a different voice and you get a glimpse of what a great song it is.”

“Derek Trucks and myself have never felt entirely comfortable with there being an Allman Brothers Band without Duane and Dickey Betts,” reveals Haynes today. “In both of our minds, the big two guitar players in the Allman Brothers are Duane and Dickey. So conceptually inserting ourselves in that picture is a little strange and awkward.

“Once the decision was made for the band to move forward without Duane, Dickey did an amazing thing by rallying the troops and carrying the torch and going into a new direction and keeping the thing from falling apart, and they made some amazing music that way. In the years I spent with Dickey, there was a lot of amazing music made.”

“I left the Allman Brothers in ’97 based on the fact that Gov’t Mule was catching fire and really enjoying ourselves in a really creative and fertile time period compared to where the Allman Brothers Band was at that time which was really dysfunctional, no communications, no rehearsing, no writing, no plans to record, and I left the band.

“During my absence they fired Dickey which was followed by the passing of Allen Woody (both Gov’t Mule’s original bass player and bass player for the Allman Brothers). All those circumstances force you into a new predicament that makes you face new choices you never would have thought of. So I found myself back in the Allman Brothers Band (in 2000.)

“Derek and I love working together. We play great together. Our relationship as guitar players was getting stronger and stronger and stronger, and we felt like once we decided to take on that task, our job would be to be the best at that task, but that would never change the fact in our minds the Allman Brothers Band was centered around the guitar interplay of Duane Allman and Dickey Betts, and in that way neither of us looked at it as our thing. We were doing a job to make it the best we could make it and playing some amazing music along the way.”

So why break up a band that, to the fans, was still in its glory?

“As far as the Allman Brothers’ decision to stop touring after the 45th anniversary, that was a band decision all of us have been talking about for about three years now, and I agree with that decision for that to happen, but it’s also a very emotional time period. We’re all going to miss it and this playing together and the majesty of the music. My philosophy is still the same (as when I spoke to you in 2009). I enjoy all the different projects that I do, and I think they all contribute to my musical happiness and my personal happiness and keep me fresh and excited and inspired.

“The concept always was when we see the threat of the band becoming an oldies act on the horizon it will be time to stop, and I understand that and agreed with it totally, mostly based on the fact that the Allman Brothers Band is a unique entity that leaves everything on the stage every night, strives to break ground every night even in some cases within the structures of songs that have been there for 45 years, and it’s so steeped in improvisation that it’s not a band that can go out and go through the motions and play its hits the way some bands could and get away with it.

“I think we all kind of realized that, and it’s something going back to ’89 when I joined the band (the first time). It’s something that all the original members have felt for a long time, and it doesn’t make it easy to make that decision when the time comes, but I think the important factor here is the fact the band never reached that point. The band was able to do what it does up until the end of the 45th anniversary knowing that that time is on the horizon.

Even though I never brought up Gregg Allman in my questions, it’s telling that Warren never mentioned him either. Of course, he would tend to see the band from a guitarist’s perspective, and Gregg is the keyboardist, but it was Duane who started the group and then brought his brother in, but even in my interviews with Gregg over the decades of the band’s existence, I never got the impression that Gregg drove the band’s sound but rather that he saw himself more as a songwriter, singer and keyboardist.

The way T-Bone Burnett basically pulled Gregg up by the collar and walked him through the process of recording his blues homage, Low Country Blues, in 2011 cemented my long held belief that Gregg had all he could handle carrying on the family name and just showing up for the shows considering his early drug problems and resulting health issues. It was – and is – amazing that he could hold his own through 45 years of grueling tours and shows like the last Beacon set that went until the wee hours of the morning.

It would be callous to say Warren Haynes has given up looking back on his Allman Brothers tenure without tinges of regret about the band’s demise, but Gov’t Mule is his baby, and now he has time to develop it into a force that is on its way to being as iconic as the Allman Brothers.

“Gov’t Mule has always taken the lion’s share of my time and energy, and that will remain the case. However, I will still be involved with other projects and embarking on new projects. So in some ways nothing’s changed other than my affiliation with the Allman Brothers which was an enormous honor to have that opportunity. That’s a once in a lifetime opportunity, and I could never say enough about how much I appreciate being given that chance.”