On the road with Bridging the Blues: It's King Biscuit Time 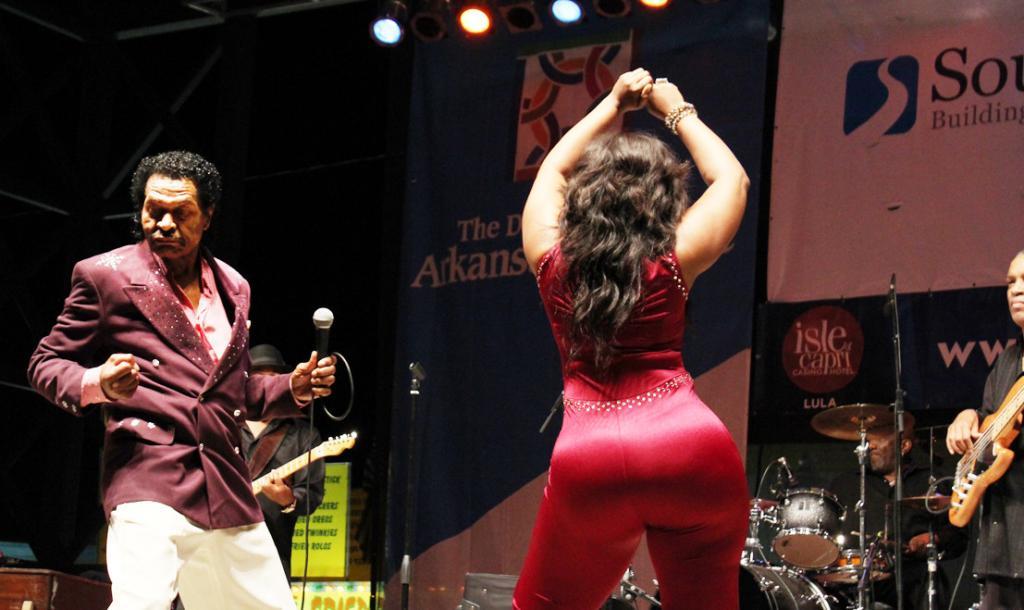 Bridging the Blues continues!! This time, we finally crossed the state line into Arkansas, but more Bridging events in Tennessee and Mississippi couldn’t keep us for long. King Biscuit is finally here!

Wednesday was the free Blues Tweet-Up at Tunica’s Gateway to the Blues, the exciting recently-opened museum in the Mississippi delta. We featured this museum in our Issue 1, Volume 4 print magazine featuring Janiva Magness. The Tweet-Up featured live music from the young Delta-born guitar slinger Kingfish, who stood on Gateway’s patio and commanded the attention of every person in the audience. Kingfish was recently featured in Issue 1, Volume 5 in the “Ten blues musicians under 18 that you gotta know!” And if you’ve seen Kingfish live, you know what we’re talking about. He plays guitar skillfully and effortlessly, with an unmatched sense of timing that keeps crowds tantalized and cheering. He’s a young teenager now. If he continues his current path, Kingfish may play his way into the world’s heart.

That Wednesday night, King Biscuit Blues Festival held a tribute jam to a man who’s path was interestingly similar to the one Kingfish’s, who powerfully played his way to a blooming internationally-recognized career, earned the nick name “Iron Man”, and tragically passed as his acclaim was only beginning. Michael “Iron Man” Burks was a legend at Biscuit, and the undubbed mayor of the festival’s “Tent City”, which now honors his life and legacy every year.

Arkansas’ The Cate Brothers got back together again after a too-long hiatus to bring their Northern Arkansas sound to the big stage. With The Cate Brothers is likely the closest you’ll ever get to experiencing the magic of a live show from The Band, who were Bob Dylan’s former band that reached international fame playing their brand of southern rock and blues. Some Band members, famously including Helena’s own Levon Helm as the singing drummer, were from Arkansas. Terry Cagle, Levon’s nephew, bore a striking  resemblance to Levon, tall and lanky, beating the drums with all the passion in the world while singing into the microphone. However, it wouldn’t be fitting to call The Cate Brothers a sort of Band “tribute”, their music is distinct and swampy, with it’s own beautiful Arkansas-grown sound.

American Blues Scene’s current cover feature Bobby Rush and his dancers and crack band were the main attraction that night, and Bobby let you know it! He moved like a man in his twenties, danced across the stage, pulled out the trademark big booty panties, and got the crowd on the Levee up and dancing all night!

On the road with Bridging the Blues