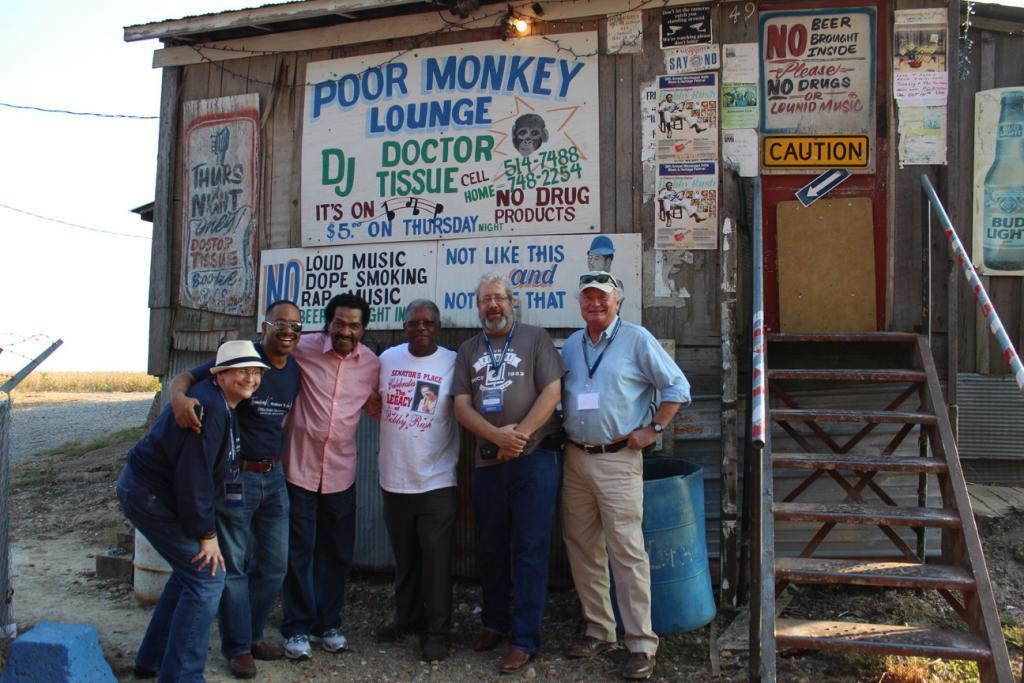 While Brandon Santini played in Memphis and Clarksdale’s Hambone Art Gallery ran live blues in the heart of bluesland, we chose to enjoy one of Bridging the Blues many events in Cleveland, Mississippi for the International Symposium on the Blues. The two-day symposium, (you can see yesterday’s recap here) involved the 188th Blues Trail Marker, partied at Po Monkey’s Juke, and ended with a bang Tuesday, with Super Chikan and Bobby Rush, the feature of American Blues Scene’s latest magazine cover, doing a duet with simple guitars and harmonicas, storytelling, and a whole bunch of laughs.

As even more students, fans, and tourists came for classes, discussions, film music and papers at the symposium in Delta State’s Delta Music Institute, the sessions were wrapped up by early afternoon so eager onlookers, Mississippi Blues Trail Commission members, and many from Cleveland’s community and Mississippi’s “creative economy” came together for a brand new Blues Trail Marker honoring Gospel and the Blues, specifically, Reverend C.L. Franklin’s contribution in Cleveland. Many know C.L. as not only an influential preacher but also the father of the great Aretha Franklin.

The Trail Chairman, the reverend of the church where the marker is being erected, and Living Blues’ Scott Barretta all said word about the area, Gospel’s intertwined roots with the blues, and the importance of the Mississippi Blues Trail.

After the unveiling though, the real party began at the world famous Po Monkey’s Juke Joint, the world’s foremost gem of a juke, though Monkey himself and his big personality were conspicuously absent — for a minute. We’ve wrote about Po’ Monkey’s several times, and featured it in an article during Bridging the Blues two years ago. The timeless yet ever-aging little juke is a beautiful conglomeration of culture, music, and area color that should be on any self-respecting blues fan’s immediate todo list (and any daring individual, for that matter).

With monkeys stapled to the low, beam-filled ceilings, pictures adorning walls wrapped with christmas lights, letters and souvenirs shipped from fans literally all over the planet, the unique lounge has been written about, filed about and talked about in dozens of outlets, including New York Times and Travel Network. Decades of field repairs on this tiny house “off a road off a dirt road” have lead to a place that can’t possibly be emulated.

Bobby Rush milled around Monkey’s, as did Otis Clay, Super Chikan, and Bridging the Blues travelers from all over the world. Fans listened to exceptional live local music inside and at some point around dusk, or “Cant [see]”, a giant red tractor rolled up, and from the high cabin, Po Monkey himself stepped down, done with his work in the fields he worked during the day, ready to begin the night with a house full of people.

Down the road however, it would soon be time for Bobby Rush and Super Chikan to take the stage, talking about their lives, their run-ins with fellow music greats, playing some songs, and having an “unrehearsed, from the heart” session by two incredibly unique and dynamic delta personalities. Hundreds of fans came to Delta State’s Performing Arts Center.

“This is not a good story” Bobby Rush stops himself mid-story to proclaim, after finishing up a beautiful, droning guitar version of his classic R&B hit “Chicken Heads”. The story, as it turns out, was about Jimmy Reed, a borrowed hearse, and how Bobby got Jimmy to play in his band for free — as long as he chauffeured the blues great to his girlfriend’s without alerting his fiance. “This is just two old friends,” Bobby says about him and Chikan. “I’d say two old men, but then I’d be lumping myself in with him!”

The two played off one another, trading licks and stories, Bobby talking at length about his time at Chess Records and growing up in rural Louisiana and later Mississippi. Bobby just spoke with American Blues Scene for a big cover feature this quarter. Get your copy here.

As the event came to a close, Bobby held Chikan’s shoulder and proclaimed that “two men got on the stage, and it came from the heart.” The International Blues Symposium came to an electric finish.

Tomorrow is a Blues Tweet-Up at Tunica’s Gateway to the Blues, but you never know, with so many events for Bridging the Blues, where the day might take you! Maybe to the King Biscuit pre-show Michael Burks Memorial Jam!