Davina and the Vagabonds to release Nicollet and Tenth 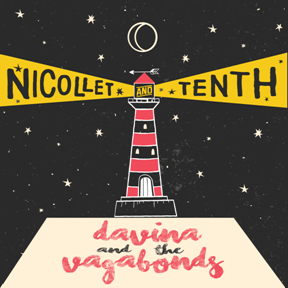 (Minneapolis, MN) – Over the past several years, Davina And The Vagabonds have been building an audience around the globe. Their shows are filled with New Orleans charm, Memphis soul swagger, dark theatrical moments that evoke Kurt Weill, and tender gospel passages. Singer/pianist Davina Sowers’ presence is indelible, while her voice defies simple categorization. Evoking comparisons as diverse as Etta James, Amy Winehouse, Billie Holiday and Betty Boop, she is simply a true original, presenting a personal vision that celebrates a century of American music.

With a full tour schedule already in place for the top of the new year, Davina And The Vagabonds will release a brand new live album, Nicollet And Tenth, on March 25th.

Normally when an artist announces they are releasing a ‘live album’ it’s considered a stopgap or throwaway release, not vital to the artist’s collection. In the case of Nicollet And Tenth, it couldn’t be any farther from the truth. Davina And The Vagabonds have built their success on the road, and the two studio albums released by the group so far have tried to be a reflection of their rollicking focused performances, clean sound and raging fun.

With the release of Nicollet And Tenth, the band is giving the listener a front row seat to what has made them popular in the first place, their live show.

“On the corner of Nicollet and Tenth, in downtown MPLS, lies a moody jazz club called the Dakota,” Davina remarked. “The Vagabonds and I have been playing there for over 10 years. It is our second home and we are welcoming you to come in, grab a drink, and listen to us play our hearts out to you!”

In 2011, Davina And The Vagabonds released her first full length, all original album Black Cloud. It was named one of the ten best releases of the year by their hometown daily the Minneapolis Star Tribune, and awarded 4 ½ stars from Downbeat Magazine. Their next release in 2014, Sunshine, hit number 13 in the Billboard Blues Chart, which led to an performance on the famed hit BBC show, Later with Jools Holland.