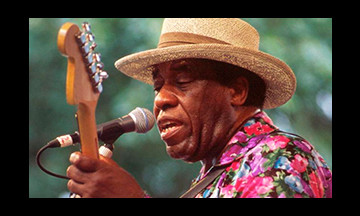 PHOENIX, ARIZONA – The blues community has lost another giant.  John Thurman Hunter Jr., better known as “Long John Hunter,” died in his sleep early this morning at his Phoenix, Arizona home. This pillar of Texas blues was 84 years old. He is survived by his wife Gayle.

Born in in Ringgold, Louisiana, but was raised on a farm in Magnolia, Arkansas. He was working in Texas as he entered his twenties, and by the time he turned 22 he was using the “Long John Hunter” name he would be known by. Having been inspired to pick up the guitar after seeing BB King perform, He released his single, “She Used to Be My Woman” on the Duke Records label in 1953.

From 1957 through 1970 Hunter was based in El Paso, Texas and would play at the Lobby Club in Juárez, Mexico. His single “El Paso Rock” was one of many singles released during the early 1960s. Between 1988 and 2009 Hunter released nine albums on the Double Trouble, Alligator, Doc Blues, and Blues Express record labels. His most recent release is 2009’s Looking for a Party.

A legend in Texas, he was known for his biting guitar and swing flavored blues. Although Hunter was not very well known outside Texas, he was widely hailed and admired overseas. He played his last show in El Paso in 2011, at the age of 80.

Watch this space for information on services as it becomes available.