"Lemmy" Kilmister Will Be Celebrated At the Rainbow Bar & Grill 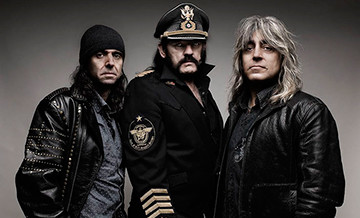 These days, the words “enigma” and “icon” are thrown around pretty loosely when talking about artists and performers. Of course, there are those that truly deserve these accolades foisted squarely upon their shoulders. It’s funny that most often, these true icons just see themselves as people doing their best at what they do, and don’t understand what all the fuss is about.

Ian “Lemmy” Kilmister was an enigma, and truly an icon in an age of wannabes. Here was a man who squeezed every drop he could out of life, and then some. For the most part, Lemmy lived his life the way that he chose without apology. He spoke his mind, never sugar coating what he said. In the old school tradition of being a stand up guy, there was never any doubt where you stood with him.

Another legendary Lemmy attribute was his work ethic, which was unflagging. Even while experiencing multiple health issues the past couple of years including receiving a pacemaker in 2013, and a hematoma in 2015, he pushed through these trials, still touring and recording. Motörhead was forced to cancel some appearances due to Lemmy’s health concerns though.

Founded in 1975 by Lemmy, Motörhead has has enjoyed success with rockers, punkers, metal heads, and more. Over the past 40 years the band has released over 23 studio albums in addition to multiple live albums and EPs. Highlights have included the albums No Sleep ’til Hammersmith, Overkill, and Ace of Spades.

On December 26th Lemmy learned he had an extremely aggressive form of cancer. He had just celebrated his 70th birthday just two days before, on Christmas Eve. Lemmy died at his home in Los Angeles on December 28th, 2015. In a statement on December 30th, Phil Campbell, guitarist for the group stated that “Motörhead is no longer.” This confirmed a comment by the group’s drummer, Mikkey Dee, that Motörhead would not continue as a band.

A memorial and celebration of Lemmy’s life will be held on Saturday, January 9th, at the Rainbow Bar & Grill in West Hollywood, California. The event is expected to run from 2:00 p.m. through 2:00 a.m. Sunday morning. Please note that The Rainbow will be closed  5:00 p.m. through 9:00 p.m. for a private service. The Roxy and Whisky will remain open to accommodate fans wanting to show their respects during this time.

Motörhead has also stated, “Family and close friends will observe a service at Forest Lawn Memorial Cemetery, Hollywood, commencing at 3pm PST and ending at 4.30pm. With such limited space available on-site, we respectfully ask that you don’t attend the cemetery… but we want you ALL to be a part of this, so we are setting up a live feed of the service via the internet on Motörhead’s official You Tube channel.

Wherever you are, PLEASE get together and watch the service with fellow Motörheadbangers and friends. GO to your favorite bar, or your favorite club, make sure they have access to an internet connection and toast along with us. Or simply invite your pals around and celebrate Lemm’s life at home. Whatever your venue, and however you can, let’s be sure to gather globally on Saturday 9th and celebrate the life of our dear friend and irreplaceable icon.”

Fans will notice that the YouTube page will have contact information to send flowers, and a note indicating that whoever wants to do so, may make a charitable donation in Lemmy’s name to the Ronnie James Dio Stand Up and Shout Cancer Fund.