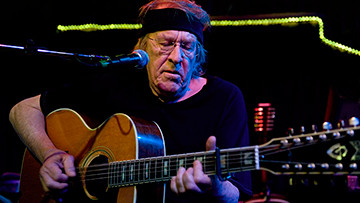 BREAKING – Paul Kantner, founding member of Jefferson Airplane has died from “multiple organ failure and septic shock,” as confirmed by his publicist, Cynthia Bowman. Kantner, who had been with the band from its inception in 1965 was 74 years old.

Referred to by many as the conceptual heart of the group, Kantner found his early influences in the folk music of the Kingston Trio and The Weavers. Jefferson Airplane played their first gig at Marty Balin’s club, The  Matrix in August, 1965. After a couple of personnel changes, the group began to develop a solid following. Press reports from this period praising the band’s performances enhanced their reputation, substantially raising their standing in the music community, even outside California.

The group’s reputation began to grow, and in 1966 they were featured in Newsweek as part of the emerging music scene that San Francisco was increasingly becoming known for. As time went on, the group’s musical direction became more psychedelic, and less folk oriented. Their 1967 performance at the Monterey International Pop Festival is the stuff of legends, and remains mythic to this day. The group appeared on television as well, performing on the The Tonight Show Starring Johnny Carson and The Ed Sullivan Show. Their appearance on The Smothers Brothers Comedy Hour was a tough act to follow for any band. Following their peers such and Cream and others, the band’s sound became increasingly heavier.

As the ’70s dawned, having made several albums, the band split up. Slick and Kantner reformed the group, which had a hit with the Marty Balin’s “Miracles” in 1975. By 1978 conflict within the group had returned and Grace Slick and Marty Balin left. Kantner managed to keep the group going in one form or another until Starship was formed in 1984. Jefferson Starship was resurrected in 1992 and toured substaintially.  Jefferson Airplane was inducted into the Rock and Roll Hall of Fame in 1996.

Kantner will be remembered as a pioneering guitarist and a prominent figure in a band that helped to define a pivotal period in the formation and evolution of modern music. He is survived by two sons, Gareth and Alexander, and his daughter with Grace Slick,  China Kantner.