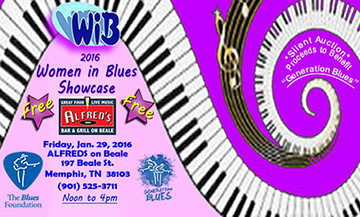 Memphis, TN – IBC week is time is always a reunion of sort members of worldwide blues community. It’s a chance to see new talent come of age, and visit with old friends. Every now and then, a guest may even have the opportunity to jump on stage and do their own thing too.

IBC week in Memphis is also a time for fundraisers and other events that showcase a wealth of musical talent. This year is no exception, and once again The WIB (Women In Blues) Showcase will be serving up exceptional performances by women in the blues.

The event enjoys the support of the Blues Foundation and the International Blues Challenge, and will take place this year at Alfred’s on Beale Friday, January 29th, from noon to 4pm.