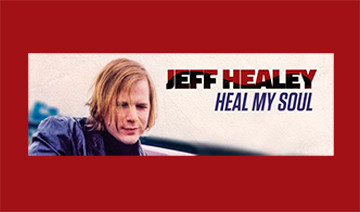 The wait is almost over. The “lost” Jeff Healey album Heal My Soul will be released on March 25th, marking what would have been Healey’s 50th birthday. Healey died in March, 2008, at age 41 having battled hard with sarcoma cancer for over three long years.

The album consists of 12 never before heard or released tracks, thoroughly restored, remastered with care by the guitarist’s estate and alive with his spirit. The result is an album full of explosive, unbridled, passion. “I think Jeff would have been so proud of this,” notes his widow, Cristie Healey. “It’s up there with his best work, by far.”

Blind since the age of one, by the age of three he was learning the guitar by placing the instrument flat on his lap and playing it like a lap-steel, he was able to fret with all five fingers and attack notes with the strength of his whole hand.

“Technically, he had a unique approach,” explains Jeff’s friend and fellow guitar virtuoso Sonny Landreth. “He had great sensibilities and instincts. When he would bend strings, play double-stops and chords, it just sounded totally different. It had a big open sound to it. He was so fluid and soulful.”

“Jeff was one of the most unique players of all-time,” picks up session ace and Toto legend Steve Lukather. “He redefined what the guitar can do and how you can play it. Pure soul and fire.”

After several albums, including See The Light, and contributing to the movie soundtrack Roadhouse, The Jeff Healey band was no more. These lost tracks are from that period. “He’d play me rough mixes of these songs,” remembers Roger Costa, Jeff’s dear friend and co-administrator of his estate. “I remember being absolutely floored – but no-one ever heard them.”

“There’s a lot more edge to these songs,” adds Cristie of hard-rocking moments like Daze Of The Night and Temptation. “A lot more passion. And I think that comes from where he was at the time. The band were just coming apart at the seams at that point.”

As Jeff’s unofficial archivist since the ’80s, Roger Costa had his first notion of starting the Heal My Soul project in the months after his friend’s passing. By early 2015, a forest of red tape had finally been fought through, allowing Roger to embark on what he calls a “labour of love”: researching the lost songs, recovering the two-inch masters, baking and transferring them to digital, reviewing the material, fixing and completing the mixes. As he recalls, it was a poignant experience: “Amongst the folks that were in the studio working on these recordings, there were a lot of moments where everyone was getting choked up. There’s a lot of emotion running through everything. There were times, particularly on songs like Baby Blue – or any song that had harmony vocals – when we’d just pop them up in the studio by themselves. And it was like he was there. It was like he was never gone.”

Heal My Soul will be available on 2LP, CD and digital formats.