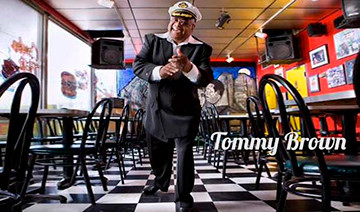 Atlanta blues legend and favorite son “Weepin'” Tommy Brown, has passed away at 84 years old. He had ceased performing in the last couple of years due to diagnosed heart issues. Brown had been in hospice care for the past few weeks.

Brown was one of several of the early Southern gospel inspired rock and rollers to stir things up in the 1950s, and he had a hit with the 1951 R&B song “Weepin’ and Cryin,'” which was actually credited to the Griffen Brothers, with whom he sang lead. An animated performer, he would crawl along on the stage and even leap into the audience, crying. It is widely known that no less personage than The Godfather of Funk, James Brown learned some moves and developed others based in part on the powerful and entertaining performances of Tommy Brown.

Another song that Brown was known for in the Atlanta region was “Atlanta Boogie.” This was among the very first songs to use the words “rock and roll.” Brown performed comedy throughout the ’60s and ’70s, having left the music business behind. He did make a comeback in 2001, and he was inducted into the Blues Hall of Fame in Memphis in 2015. He was also honored by the Atlanta City Council as they recognized him with Tommy Brown Day on September 8th, 2015.

Brown produced a reissue of his ’40s and ’50s sides in 2002, titled Classic Tommy Brown. He released albums such as 2004’s Remember Me, and 2009’s Rockin’ Away My Blues, both exciting examples of the energy and and magic of his live performances.

Funeral and life celebration details are still coming together, so watch this space.