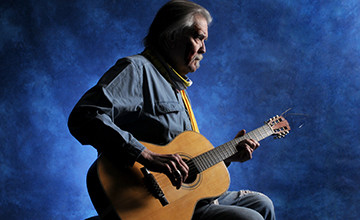 Nashville, TN – Modern day troubadour and songwriting legend Guy Clark died yesterday at the age of 74. Along with Willie Nelson, Johnny Cash, Joe Ely, John Haiti, Lye Lovett, and Leonard Cohen, Clark had taken his place among the greatest storytellers in modern music. Revered and beloved by friends and peers alike, he was everything composers strived to achieve in their music; his music painted pictures and told stories, and hauntingly good ones at that.

Born in in Monahans, Texas in 1941, Clark was a man of many talents. Besides being an accomplished composer and performer, he was also a luther and produced fine guitars, a good portion which he gave to his friends. As much as he was loved and admired by his friends, he also took time to help and mentor artists,  Steve Earle and Rodney Crowell being among them.

After he moved to Nashville, for many years his home was an open house and open jam where friends gathered to write and play music with each other. While writing and performing were among the things he enjoyed most, he deeply loved his wife Susanna Clark, also a songwriter, and an artist as well. They were married 40 years until her death from cancer in 2012. His health began to decline soon thereafter. In 2014, his album My Favorite Picture of You won the Grammy Award for Best Folk Album. In time, he began to walk with the assistance of a cane. In the spring of this year, Clark entered nursing home care.

Guy Clark’s songs have been recorded by many artists including Johnny Cash, Vince Gill, Ricky Skaggs, Steve Wariner, Brad Paisley, John Denver, Rodney Crowell, and The Highwaymen. Then there’s also Steve Earle, Jimmy Buffett, Asleep at the Wheel, and many, many more.

This legend’s honors include being lovingly referred to as “The Fifth Highwayman,” and he was inducted into the Nashville Songwriters Hall of Fame, as well as being an honoree of the Academy of Country Music Poets. His humor and wisdom will be missed by all.

Clark is survived by his son Travis and daughter in law Krista McMurty Clark.