Robby Krieger Still Knows How To Light a Fire 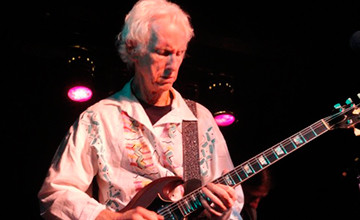 Recently, I was extremely privileged to see Robby Krieger play live, before a packed Cabot Theatre in Beverly, Massachusetts. Krieger and company set the night on fire! Backing Krieger were his son, Waylon Krieger on vocals, with Phil Chen on bass, Ty Dennis on drums and Nathan Wilmarth on keyboards.

The evening was a celebration of music from the legendary band, The Doors.  For two psychedelic hours the band played all the hits, and a few surprises. Those in attendance could not help but to channel their inner hippie.  From the first few measures of “Break On Through,” fans were bobbing their heads along to the music and having a groovy time!

At seventy, Krieger is still an accomplished guitarist. He dazzled the audience with his fretwork on “Peace Frog,” “Waiting For The Sun,” and  “Wild Child”and other classics.  Son Waylon proved he could hold his own on vocals singing “Moonlite Drive” and “Horse Latitudes.” Wilmarth, was dynamite throughout the night, but he absolutely rocked it on “Riders On The Storm” and “Alabama Song (Whiskey Bar)”!    The band did a great version of  “When The Music’s Over,” from the Strange Days album.  Had fans closed their eyes, they could easily think they were listening to the original band members.

After a short break, the band finished strong surprising fans with “People Are Strange,” and a cover of Jeff Beck’s “Freeway Jam.” Closing out the evening, the band blew the roof off with a rousing rendition of “Light My Fire.” Having waited so long to experience Krieger live, it was definitely worth the wait. Krieger can still rock a roadhouse!