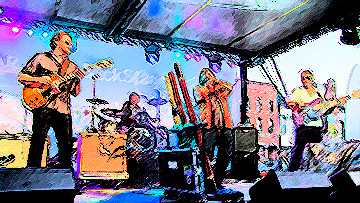 Born in England, and growing up in Australia, Peter D. Harper, or simply Harper, as he is known, has a unique perspective on life, love, and music. He incorporates elements of blues, folk, soul, funk, rock, and world music, giving his devotees what he calls “world blues.” Aside from being a moving vocalist, he has been referred to as as the “Hendrix of the harp.”

Show Your Love, out on Bluharp Records USA, contains 11 tracks with a running time of just under 42 minutes. Along with his distinctive harp playing, Harper also plays the the djembe and didgeridoo, unique to Australia. Harper’s band, Midwest Kind, provides wonderfully tight backing that doesn’t miss a beat throughout the entire album.

Chock full of infectious beats, Show Your Love grooves with the tunes “Hell Yeah,” and “Let’s Move.” “What’s Goin’ Down” has echoes of ’70s southern rock, with hints of country mixed in. “Drive Brother Drive” is an acoustic flavored track with a very subtle nod to CSN with its airy vocal harmony.  Still other tracks, like “It’s Time to Go” and “We Are In Control,” are very much blues inflected.

The selections on Show Your Love were extensively road-tested on audiences which has paid dividends for Harper and company in many ways. First, these songs have been enjoyed by audiences the world over. Secondly, the band has had time to work the kinks out. Third, because the kinks have been worked out, and the songs are so second nature, there is plenty of room to stretch out come into their own as a tight unit when performing these songs.

Road testing is just one of the aspects of this music that makes it so inviting, and ultimately, satisfying. Another welcome facet of this album is that the songs are well written stories that draw us into them; commentaries on various aspects of our lives. The hustle, the environment, and even our very so-called freedom itself. So, in addition to being moving music, Show Your Love invites us to think about our lives and examine them more closely. And all the while, listeners are treated to vibrant, music that is truly a treat for the senses.

Treat your ears to something unique and satisfying, and get cozy with Show Your Love soon. This album will change thinking about what blues can be.