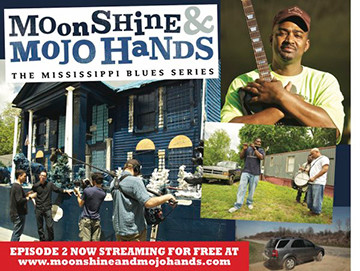 In Episode 2, released today, hosts Jeff Konkel and Roger Stolle travel deep into the heart of the North Mississippi Hill Country to meet with descendants of two of the area’s most celebrated musicians – Junior Kimbrough and Otha Turner. The episode also features a surreal tour of Graceland Too, a shrine to Elvis operated by the King’s biggest fan, Paul McLeod. The new episode – along with last week’s premiere episode – can be enjoyed online for free.

Future episodes will feature such Mississippi blues artists as James “Super Chikan” Johnson, Leo “Bud” Welch, Robert “Bilbo” Walker, Mark “Muleman” Massey and many more. The series will also explore other aspects of Mississippi culture including barbecue, soul food, folk art and moonshine. All 10 episodes will be available online at the series website. New episodes will be added each Thursday.

As part of the series roll-out, public screenings of the first episodes have been held at two new world-class music museums: The National Blues Museum in St. Louis, Missouri and the GRAMMY Museum Mississippi in Cleveland, Mississippi.

Moonshine & Mojo Hands reunites series creators Stolle and Konkel with Damien Blaylock and Lou Bopp, both of whom figured prominently in the duo’s earlier film projects, M for Mississippi and We Juke Up in Here. Blaylock is chief editor for the new series. The new series is a joint production of Cat Head Delta Blues & Folk Art and Broke & Hungry Records.