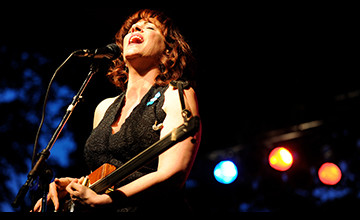 Return to Bull Run!  April 28th was my first time back to Bull Run since February of this year and it was my first time seeing Janiva Magness.  Located in Shirley, Massachusetts, Bull Run is the perfect place to see live music.  The food is great and the wait staff are always professional and helpful.  It’s my favorite place to go and escape from the world for a few hours and listen to a great band.

Magness’ seventeen song set list began with “There It Is” and “I Won’t Cry” from her 2012 release Stronger For It.  “There It Is” has a little something for everyone in it, from a great rhythm section to the chorus which gives the song even more depth.  “I Won’t Cry” was the second song of the evening and featured a darker mood to the evening.  After listening to these first two songs, you won’t question the vocal range of Magness and the talent of her band mates.  “Walking In The Sun,” featured on her 2010 release The Devil Is An Angel Too, was another crowd pleaser with audience participation as an extended rhythm section for the band.

After a few oldies but goodies, Magness performed a number of songs from the new album.  Starting with the title track to the album Love Wins Again, an uplifting song has everyone wanting to dance.  If you absolutely can’t dance, at least you can tap your toes.  “Real Slow” features a steady beat that will keep your head bobbing.  “Hold Me” had a bit of a gospel feel to it.  “Moth To A Flame” was another slow hard hitting blues number and Doorway.

At about half way through the evening, Janiva Magness called the legendary Ronnie Earl up on stage to perform a couple of numbers with the band.  One of the songs he sat in on was “Do I Move You,” the title track to her 2006 release.  Earl is a guitar master, and local resident; he often plays with the featured band when he is not out on tour himself.

This outing at Bull Run is a fine example of why Magness is a multi Blues Music Award winner including the BB King Entertainer of the Year in 2009, only the second woman to win the award after Koko Taylor.  Magness also won best Contemporary Blues Female Artist that same year. These are just a couple of reasons why she is one of the best vocalists in the world of blues and highly regarded throughout the music industry as a whole. Have a chance to see Janiva Magness live? Then go! You will not be disappointed!