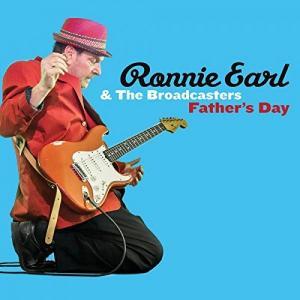 A blues lover that has experienced Ronnie Earl live has truly witnessed a celebration of music, and passion. Earl improves exponentially with each new release, and his journey of self-realization has been as exciting and rewarding for his fans as it has for him.

In May of 2014, Earl earned his third BMA Award from The Blues Foundation for Guitar Player of the Year on the heels of his incredible live album, Just for Today. In June of 2014, he released Good News, which was well received by fans and critics alike. In addition to these huge releases, Earl has become one of the hottest attractions at festivals throughout North America and around the world.

Earl has just released his ninth album on Stony Plain Records, Father’s Day. Containing thirteen tracks, the album runs just over one hour and twenty minutes. That may seem like a long time, but listeners will be so engrossed in this music the time will fly by. Billed as a tribute to some of the forefathers of the modern blues form, Father’s Day more than delivers on its implied promise of substance. Not to be forgotten by any means are The Broadcasters, who have functioned not merely as a backdrop, but as an integral aspect of Earl’s sound for more than twenty years. The Broadcasters are Lorne Entress on skins, Dave Limina on the ivories, and Jim Mouradian on the bass. Guests include Larry Lusignan, Tim O’Connor, and Nicholas Tabarias on guitar, Scott Shetler on baritone sax, and Mario Perrett on tenor sax. Vocalists are the always absurdly fabulous Diane Blue, and versatile, incredibly passionate Michael Leadbetter, who is known for his work with the Nick Moss Band.

There are various points on this album where time itself almost stands still. Each track is better than the one that came before it, and the cumulative effect on listeners is staggering. The vocals by Blue and Leadbetter are inspired and delivered with verve throughout. As always, the band shines in its own right, even as they enhance the bountiful harvest of Earl’s guitar.

There were tracks we found especially seductive. The guitar work on Otis Rush’s “It Takes Time” is so nimble and fluid it stops listeners in their tracks, and the vocal by Leadbetter is just so. Another Otis Rush tune, “Right Place Wrong Time” is decadently slow, deep blues that hints at Memphis soul, while Magic Sam’s “What Have I Done Wrong” is an uptown Chicago funk reminiscent of Junior Wells’ soulful rocking at Theresa’s Lounge back in the day.

Other gems include Earl and company preaching a stirring sermon from the church of blues on “Giving Up,” again showcasing masterful guitar lines that don’t crowd, rush, or intrude upon the message. Father’s Day, written by Earl and Leadbetter, is dazzling, and another Earl original, “Follow Your Heart” is smoking West Side soul, driven by pointed guitar and captivating vocals from Blue and Leadbetter. The entire band really lights this number up! “Moanin'” is just enthusiastically understated sophistication that slowly swings with style and panache.

On Father’s Day, Earl has taken all that he has learned and painted his masterwork. This album is the sum of his experience, passion, pain, struggle, gratitude and joy, with him obviously loving every second conveying this to us. It is not hard to envision in the future, Father’s Day being discussed in the same breath as Magic Sam’s Live at the Avant Garde, or Junior Wells’ Live at Theresa’s 1975. Don’t walk, run to your local record shop and give this album a good home; yours.