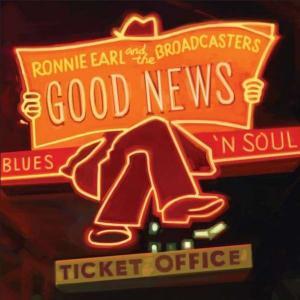 When Ronnie Earl releases new material, it’s cause for celebration. Like fine wine, he gets better with age. Just when it seems he can’t put any more heart into his music, he digs deeper still into his soul, delivering yet another inspiring performance. Last year Earl and his Broadcasters released the brilliant Just For Today (Stony Plain Records), a collection of performances gleaned from shows at three different venues in Massachusetts. Continuing on his roll, earlier this year, the former Room Full of Blues guitarist won his 3rd BMA Best Instrumentalist award for Guitar.

His newest album, Good News, on the Stony Plain label, features ten generous helpings of blues. Sound quality is crisp and clean, and the mix is perfect. Kudos to Huck Bennert who handled the recording and mixing. The Broadcasters are: Ronnie Earl – guitar, Lorne Entress – drums, Jim Mouradian – bass, and Dave Limina on piano and Hammond B3. Diane Blue adds her fine vocals, while Nicholas Tabarias and Zach Zunis contribute winning guitar performances to the festivities on various tracks.

The title, Good News is a celebration of the Sam Cooke album Ain’t That Good News, released 50 years ago. Overall, the album serves up many flavors of blues including smokey, late night, in a darkened club with your favorite girl blues, and blues with a captivating soulful zest. There’s some exquisite playing that touches on on jazz as well. “I Met Her On That Train” is a spirited nod to rockabilly a la the Junior Parker classic, “Mystery Train.” The band does justice to “Change Is Gonna Come,” with Diane Blue’s moving vocal, and Dave Limina’s savvy keyboard lines and fills. “Time To Remember” is slow, jazzy soul that is just so well played! At almost 11 minutes, “In The Wee Hours” is a slow, deep blues with satisfying guitar lines from Zunis, Tabarias, and Earl. The piano touches from Limina (again!) are perfect, and when Blue joins in with her vocals, she adds just that little bit of extra love. This is a track to be enjoyed through a set of Bose 901’s on a rainy day, as we sit in our favorite chair, guitar in hand. What an elegant, stunning piece of music.

Other cuts we particularly enjoyed were “Six String Blessing,” with its unhurried pace, delicious guitar tone, and another compelling vocal from Blue. “Puddin’ Pie” has a moderately cooking feel, with that syrupy, dripping guitar tone form Earl, and phrasing that really impresses. The album closes with “Running In Peace,” which is Earl’s tribute to the Boston Marathon’s Bombing victims. Again, Earle’s phrasing, tone, and touch left us breathless.

Whether a blues lover, or a musician looking to gain some perspective, this album is such a revelation. Everyone’s playing is magnificent, including Blue, whose voice is definitely a finely tuned instrument here. Earl is at the top of his game for all of 59 minutes. This is one album blues lovers should not be without.