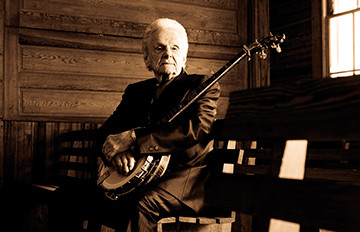 NASHVILLE, TN —  Dr. Ralph Stanley, the patriarch of Appalachian and bluegrass music, has died at the age of 89. Born and raised in the forests and coal country of Virginia, Stanley, along with his brother Carter founded the Stanley Brothers, and often led The Clinch Mountain Boys. His mother secured his first banjo from his aunt when he was about 15, and she taught him how to play in the clawhammer style.

Returning home after briefly serving in the military, Stanley began performing. He would perform with his brother Carter as The Stanley Brothers in their band The Clinch Mountain Boys until Carter’s death in 1966 from cirrhosis complications. Over the course of their career they would record for Columbia Records, as well as King Records.

Initially they would perform a lot of material by the “Father of Bluegrass,” Bill Monroe. Eventually they began to write their own songs including, “Lonesome River,” “White Dove,” “Memory of Your Smile,” “Hard Times,” and many, many others. Upon the death of his brother Carter, Stanley was unsure as to whether or not he would continue performing, but at the urging of his fans and others, he continued to write, play, and perform.

Through the years, his work has been admired and performed by artists as diverse as Bob Dylan, the Grateful Dead, and a host of others. He was also admired for his a cappella singing style reminiscent of the Primitive Baptist Universalist church he grew up with. In 2000, he introduced a another entire generation to the beauty of his beloved music with his performance of “O Death” on the hit soundtrack from the movie O Brother, Where Art Thou?.

Having been awarded an honorary Doctorate of Music from Lincoln Memorial University in Harrogate, Tennessee, in 1976, he is sometimes referred to as “Dr. Ralph Stanley”. Other honors and awards include induction into the International Bluegrass Music Hall of Honor in 1992 and again in 2000. Also in 2000, he was named as a Library of Congress Living Legend. He earned Grammy Awards for Best Male Country Vocal Performance for “O Death” in 2002, and Best Bluegrass Album for Lost in the Lonesome Pines, in 2003. He was awarded the National Medal of Arts in 2006, and in 2014 he was awarded a second honorary Doctorate of Music from Yale University. Dr. Ralph Stanley will be missed not only for his talent, and his music, but for his friendship and generosity as well. His mentorship to such artists as Ricky Skaggs and Keith Whitley ensured that a new generation of players would carry on the traditions and the music that he loved so much.