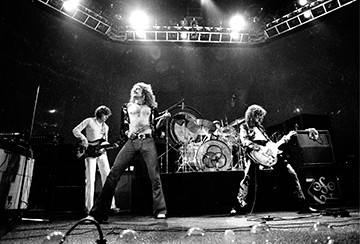 BREAKING – Jimmy Page and Robert Plant showed almost no reaction when the verdict was announced in a Los Angles courtroom today. After nearly five hours of deliberation, the eight person jury decided that there was not a “preponderance of evidence that original elements of ‘Taurus’ are extrinsically similar to ‘Stairway to Heaven.'”

Page and Plant for their part, have long maintained that they had not lifted parts of Spirit’s song “Taurus.” While the jury was not allowed to hear original recordings of both songs, they did send a note to the judge requesting acoustic guitar covers of Spirit’s “Taurus” be played twice. The jury had not been allowed to hear the original recordings because plaintiffs were only permitted to sue over the recording’s sheet music.

This was a huge sticking point for Francis Malofiy, the plaintiff’s attorney who later lamented to assembled reporters, “They won on a technicality. We proved access. We proved they had access to the music, but [the jury] never heard the music. So the jury’s sitting there with basically blinders on without ever having the opportunity of hearing the evidence at issue.”

The jury agreed that the late Randy Wolfe’s trust actually did in fact own the copyright for “Taurus,” a question which had been raised by Zeppelin counsel Peter Anderson during the course of the trial. The jury also agreed that yes, there was indeed a “preponderance of evidence” that Page and Plant did have “access” to “Taurus” before they wrote “Stairway to Heaven.”

Page and Plant did issue a statement after the verdict was read saying, “We are grateful for the jury’s conscientious service and pleased that it has ruled in our favor, putting to rest questions about the origins of ‘Stairway to Heaven’ and confirming what we have known for 45 years. We appreciate our fans’ support, and look forward to putting this legal matter behind us.”

The jury’s decision on “Michael Skidmore v. Led Zeppelin et al,” means that royalties for what may be Led Zeppelin’s signature song will remain as they have been. An estimate by Condé Nast Portfolio in 2008 asserted “Stairway to Heaven” had earned over some $562 million in publishing royalties and record sales since its release in November of 1971.