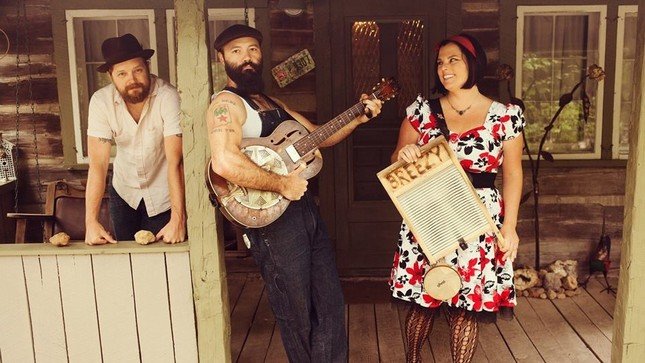 There is an interesting event coming to the Midwest on Saturday, June 11th, to say the least.  The Missouri Chainsaw

Grassacre will be held at Crossroads KC at Grinders in Kansas City, Missouri, with The Reverend Peyton’s Big Damn Band headlining the show. Why should you know this?

In case you’ve missed our ever so sly expansion into more musical genres, let us break it down for you.  The mission of American Blues Scene is as close to the title as one can get.  We focus on the American musical genre of the blues and all that entails. With that said, the blues, in all its various forms, has, in many ways, helped give birth to an ever expanding universe of musical styles. Some of these are quite obvious, such as rhythm & blues, rock n roll, and rockabilly.  Some have grown up alongside the blues over time. Country music, jazz, gospel, roots, folk, Americana and yes, bluegrass, all have a kinship with the blues as true American art forms.

These genres are quickly gaining popularity as evidenced by the addition of the Americana/Folk charts to Billboard magazine on May 24th. We feel that we would be remiss in not reporting on, and covering them. Keeping all that mind, an event such as this is an excellent way to check out some amazingly talented artists and for blues lovers of all types to expand our horizons.

The Reverend J. Peyton and his musical family hail from Brown County, Indiana and their incendiary live shows are legendary. Mixing Delta blues with hillbilly hardcore, their performances are sharp as razor wire. They’ve been part of the Van’s Warped Tour and played with artists from Derek Trucks to Flogging Molly and always leave the crowd wanting more.

Five other groups make up the one-day extravaganza, and all have names that seem to compete with the festival name itself for the most, shall we say, compelling.

From Chicago, Illinois comes Cornmeal a five-piece roots and bluegrass jam band, well known for blending lightning fast tempos and impeccable harmonies into nearly unrivaled live performances. While steeped in tradition, they push the boundaries and challenge the recipes of bluegrass, Americana, and folk.

Mountain Sprout hails from Eureka Springs, Arkansas armed with a banjo, guitar, stand-up bass and fiddle, but they are not your grandma’s bluegrass band. These guys are a high energy, overall-wearing, bearded music machine chock full of original, witty songs such as “Town Drunk” and “Dry Counties” to name but two. Anyone else see a pattern emerging here?  An acoustic group still able to melt faces, these guys can’t be pigeonholed into any one category.

Although they perform barefoot and play fiddle, guitar, banjo, jug and washboard, the Austin, Texas band Whiskey Shivers is another surprise group. They are known far and wide for their contagious exuberance. The fact that they play at breakneck, nearly punk rock speed is beside the point. These guys keep to traditional vocal harmonies in their songs about love, pain, sin, regret, and video games.

The hometown, Kansas City band Loaded Goat, is best described as a mash of Bluegrass and old-timey Honky Tonk. They predominantly play a set of original tunes about heartaches and headaches, but do throw in an occasional cover song or two. This five-piece gang of irregulars lists their influences as Waylon, Doc, Earl, Johnny, Bill, Merle,
Hank, Hank, and Hank. What’s not to like?

Rounding out the lineup is the Lawrence, Kansas-based band, Cowgirl’s Train Set. At first glance, one notices the traditional set-up of guitar, banjo, stand-up bass and fiddle; but then comes the twist of adding the blues, swing and jazz influences of a master saxophone player to the mix. These Kansans take Roots and Folk and wring out a set renowned for leaving dance floors destroyed.

Whether you just can’t quite make it to Chicago for the annual Blues Festival there, or if you just want to add something a bit different to your musical diet, The Missouri Chainsaw Grassacre might just be your ticket!