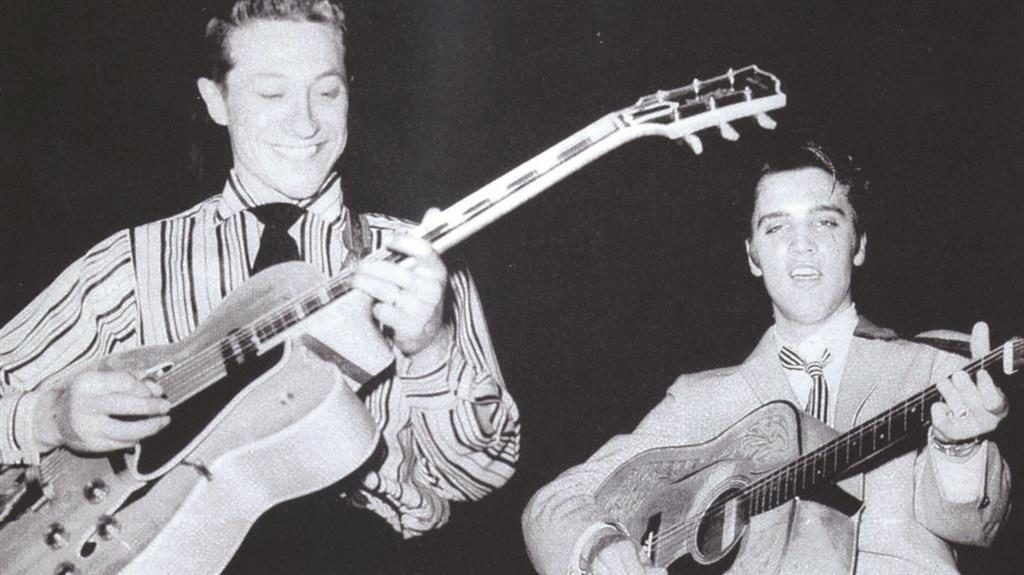 Scotty Moore, long-time guitarist for Elvis Presley and Rock and Roll Hall of Fame inductee, died Tuesday at his home in Nashville, Tennessee. While the cause of his death is not yet known, he had been in ill health for several months.

Born Winfield Scott Moore III on December 27th, 1931, outside Gadsden, Tennessee, he began learning guitar at the age of 8. In 1948, while still in his teens, he enlisted in the United States Navy, serving until 1952. With a background in jazz and country music, he moved to Memphis and formed a group called The Starlite Wranglers, which included

Sam Phillips, owner of Sun Studios, contacted Moore asking him to check Presley out after he had made a few solo recordings. Moore invited Presley to his home on the 4th of July as a sort of pre-audition, and the next day Presley, Moore and Black were all in the studio. During a break in the session, Presley began playing an up-tempo version of Arthur “Big Boy” Crudup’s, “That’s All Right Mama” and the two other musicians soon joined in. The rest is rock and roll history.

In 1958, his job with the Blue Moon Boys dried up when Presley was drafted into the Army. Two years later, he was back with him again, this time at the RCA label.

Moore had a unique combination flat and finger picking style that drew heavily from Chet Atkins, but added a rockabilly feel. Playing his Gibson Super 400 guitar, he was quickly acknowledged as a rock and roll pioneer, influencing artists including Jimmy Page and Keith Richards. Richards was quoted as saying, “Everyone wanted to be Elvis. I wanted to be Scotty Moore”.

In 1964, he released a solo album on Epic Records, entitled, The Guitar That Changed the World. He also maintained a career producing and engineering, opening his own, Music City Recorders studio in Nashville the same year. In the following years he worked with artists including Charlie Rich, Jerry Lee Lewis, Roy Orbison and several more.

Moore’s last gig with Elvis was on the ’68 Comeback Special, but then he mostly gave up guitar for nearly 20 years. In 1992, Carl Perkins coaxed him back into the studio to join in on the album, 706 ReUnion: A Sentimental Journey. Later in that decade, he published his autobiography, “That’s Alright Elvis.”

Moore will forever be known as the power behind the throne. If not for him, “The King” may have never been.