Katy Guillen & The Girls Are Creating Their Own Sound 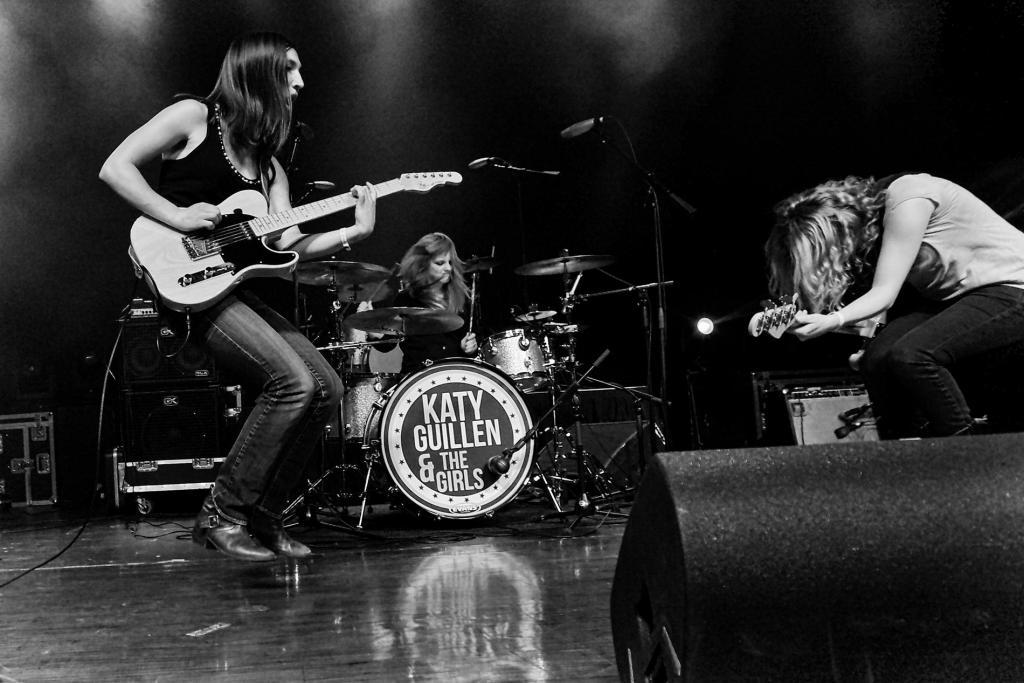 Kansas City has long been a hotbed for all things music.  The city’s history of jazz, blues, ragtime, big band and swing is both long and distinguished. At the forefront of the KC music scene these days is a power trio of young women known collectively as Katy Guillen & The Girls.

One of the most sought after acts in America, KG&G got their start when guitarist and lead singer, Katy Guillen, was offered a slot to open for the all-star group, Royal Southern Brotherhood in 2012. In need of a backing band, she

enlisted bassist, Claire Adams and drummer, Stephanie Williams, who both also supply backing vocals. The chemistry was immediate and incendiary. Guillen’s searing blues guitar complimented by Williams’ jazz and rock influenced drumming and Adams’ impeccable bass lines quickly elevated their original material to an epic status. In 2014, the release of their eponymous, debut album and impressive showing as finalists at the International Blues Challenge in Memphis made them a force to be reckoned with.

Their sophomore album, Heavy Days, is set for release on June 24th and takes them on a new heading. “The band’s songs started out in more of a blues vein on the first album,” says Guillen, “and with the newer originals we have been moving toward more of a rock and roll sound with high energy and heavy riffs. Its what you come up with when you’re not thinking about fitting into a niche or genre, but when you’re having fun.”

Fun seems to be the key word with KG&G. They’d rather be on stage performing than almost anywhere else. They’ve had the opportunity to tour the US and Sweden, as well as play the Montreal Jazz Festival, and the groups with whom they’ve shared the stage thus far are some heavy hitters. Along with trading licks with seasoned artists such as Samantha Fish and Danielle Nicole, they’ve also opened for bands like the Doobie Brothers. One thing they took away from each show was the advice, “Don’t settle. Don’t wait. Do what you love, have fun, and don’t stop.”

If for one second you think this is just another air-headed girl group, you need to immediately hit your mental reset button and reboot your thinking. This is a triad of smart, talented, business minded young women who are charging ahead with the speed of a runaway train. The most astonishing thing about them is how deeply rooted they are with one another, and their hometown, as they scale new heights daily.

Take their new release, Heavy Days, for example. There are guest appearances from renowned keyboardist, Mike “Shinetop Jr.” Sedovic, and trombonist Ryan Heinlein of Project H, both famed Kansas City musicians in their own right. That’s just the beginning, however. The album was recorded at Weights and Measures Sound Lab in the “City of Fountains,” with Paul Malinowski producing and Duane Trower as the engineer. They played live in the studio, recording 10 tracks in just two days. Then, as Guillen describes it, they spent the better part of two months, “laying down ideas and fleshing out the bones.” To add the proverbial cherry on top, the girls founded KG&G Records in conjunction with the VizzTone Label Group, all while maintaining a nearly non-stop touring schedule.

When we asked Katy why go to all this extra bother, her response was honest and heartfelt. “One of our goals,” she explained, “is to be able to maintain creative integrity in a competitive industry. We want to have control over what we do, selecting our own songs that go on our own albums, deciding when to release them, what aesthetic to use, etc. On top of all this, we have accomplished these things as a result of the efforts of our own KG&G family. I couldn’t be prouder of that. What’s more, is the three of us have experienced it all together. Its made us grow closer and be really grateful for each other.”

Their musical influences are diverse. Influencing the band’s collective musical consciousness is a wide-ranging group from Jimi Hendrix and John Lee Hooker, to Heartless Bastards, Band of Skulls, and even The Bangles and Beach Boys. This is probably why they can’t be typecast into a specific genre. Then again, they don’t want to be. They describe the ride they’re on as fun and enlightening, and they are genuinely excited to be creating their own sound and bringing it to the world. In our opinion, you’ll be just as excited once you’ve seen them.