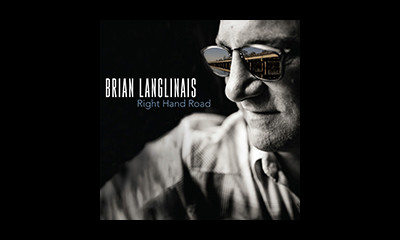 For music lovers and more specifically, blues lovers, 2016 is shaping up to be quite a year for diverse talent. It doesn’t seem to be slowing down anytime soon, as evidenced by Brian Langlinais’ new release, Right Hand Road.  Of the ten tracks, six are new material that Langlinais co-wrote with Dave Duncan, a master guitarist and songwriter himself.  The remainder are four covers that sound as fresh the day they were first.

The band consists of Brian Langlinais on lead vocals and guitar. Also from Langlinais’ home state of Louisiana, are Ron Eoff on bass, Patterson Barrett on keys and mandolin, Bryan Brignac on drums and Charlene Howard rounding out list on backup vocals. Representing Nashville, James Pennebaker plays guitar and the lap steel guitar, Steve Conn pounding out the keys on the piano and organ and adding some accordion along the way.  And last but certainly not least we have Lynn Williams on drums and Jonell Mosser on backup vocals.

Right Hand Road is the perfect way to experience Louisiana blues peppered with Professor Longhair style piano riffs, and songs that have listeners imagining they are walking down Nashville streets floating on the sounds of the city.

“You Can’t Say I Didn’t Love You” is a hard hitting in your face number that bats lead off on the album and sets the tone for the rest of the album.  This swaying back and forth tune tells the story of a romance that didn’t end well. With a great opening guitar riff that is reminiscent of Keith Richards, and a horn section that is absolutely dynamite, it grabs folks’ attention right away.

“Don’t Let The Green Grass Fool You,” a Wilson Pickett smash hit from the early seventies is presented a Cajun feel to it.  The title track has Langlinais and company showing off their considerable acoustic skills. “Louisiana Love” captures all things New Orleans.  The song starts off with a Professor Longhair sound and quickly brings in the horns that really set this piece off nicely.

“It’s The Whiskey That Eases The Pain” is the perfect prescription for anyone who is feeling down.  The rhythm section pulsates even as Patterson Barrett is on fire as his fingers dance up and down the eighty eights. “Our Love Is Slipping Away” is a beautiful acoustic that sings of the spark in a romance is dying, how there’s no denying it, and that there’s no saving it.  This number will definitely tug on listener’s heartstrings.

Right Hand Road is the best of both worlds. A great mix of originals and covers, electric and acoustic, this album should be included in any up and coming collection. Pick it up soon. You won’t be disappointed!