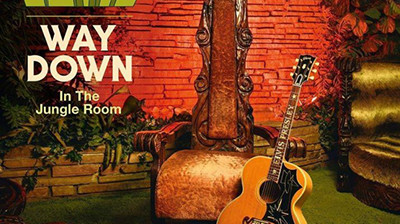 Released just in time for Elvis week 2016, Way Down In The Jungle Room, a double disc album is a must have for all fans of Elvis Presley.  The first album consists of sixteen tracks that Elvis fans have come to know and love from the Jungle Room Sessions that were recorded in early February and October of 1976.  The second disc contains the outtakes, providing an insight to a recording session with the King of Rock n Roll.

“Way Down,” the first track on disc one features a driving bass line that’s a perfect mate to some nifty licks on the piano.  Another well-known feature on this track is the vocals of the famous J.D. Sumner, known for his extraordinary vocal range. Sumner held the Guinness World Record for recording the lowest bass note, a title he held for eighteen years!

“She Thinks I Still Care,” first recorded by George Jones in 1962, was a number one smash hit for him on the Billboard US Hot Country chart. Since its release, it has been recorded by several artists over the years such as Connie Francis,  Anne Murray, Patty Loveless, and of course Elvis Presley.  This song tells the tale of a former love that thinks that her ex still has feelings for her because he dared to ask about her.  Elvis owns this number from beginning to end and there will not be dry eye left in the room once he’s finished!

“The Bitter They Are, The Harder They Fall,” written by Larry Gatlin in 1973, is another country love ballad that tugs at the heart strings. It will surely require a tissue or two to get through this sad song, but fans love it nonetheless.  “Pledging My Love” was originally recorded by Johnny Ace in 1954.  A blues ballad that displays a classic 50’s style pulse on the piano and a slow guitar riff in the middle of the song, will have folks dancing cheek-to-cheek! Elvis shows tremendous command throughout this song.

“For The Heart” is an upbeat country yarn that tells the tale of one pledging their undying love to their better half.  This number speaks to just about everyone who has uttered the words “I can’t love anyone else.”

“Oh Danny Boy” was originally written in 1913 by the English songwriter Frederic Weatherly. Ironically, this has become more of a traditional Irish Folk classic over the years and recorded by many, including Elvis Presley.  Elvis nails this one down tight.

“Moody Blue,” recorded by Elvis on February 4th, 1976 and released on November 29, 1976 is the perfect blend of country meets rock meets disco.  The song has a fast tempo that will make you want to put on your platform shoes and start groovin’! “Moody Blue” would be Elvis’ last number one hit and sadly, he would be dead six months after its release. Elvis sings about how difficult it is to figure out the opposite sex, and just how different men and women are from each other.

Throughout his life and career Elvis has influenced and inspired musicians of all genres, and he continues to do so almost 39 years after his death. He proved time and again that he can sing any style of music and make it his own.  Though he left us too soon, Elvis will always live through his music and his fans the world over.  If you haven’t picked up Way Down In The Jungle Room, don’t wait!

Way Down In The Jungle Room – Elvis Presley