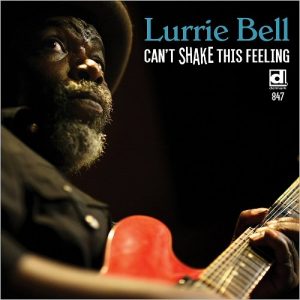 Chicago singer and guitarist, Lurrie Bell, is a blues legend, sired by a blues legend. The son of harmonica great, Carey Bell, Lurrie was raised in the musical tradition of the Windy City, and early in his career, played with artists including Eddy Clearwater, Big Walter Horton, Koko Taylor and Billy Branch. Most recently, he won two BMA awards and now presents his 12th solo album, Can’t Shake This Feeling, on the Delmark label.

Produced by Grammy winner, Dick Shurman, and recorded at Delmark’s Riverside Studio, the sound couldn’t be more authentic if it were recorded at Theresa’s Lounge.

From the time we dropped the needle on, “Blues is Trying to Keep Up With Me,” we were hooked. The unmistakable sounds of Chi-Town boomed from the speakers like an Amtrak horn. On the first of four original tracks, all the elements of the genre immediately come to the forefront, and the band members, each band leaders in their own right, make their presence known.

The title track, which features the old school, amplified harp of Skoller, isn’t the kind of tune that makes you want to smack your mama. Its the kind of slow shuffle that makes you want to grab your date for an extended dance floor grind. Bell’s ancient, gritty voice, belies his 57 trips around the sun, but is the perfect contrast to his crystal clear guitar playing.

“This Worrisome Feeling in My Heart,” is the type of smoldering number that proves Bell’s originality and authenticity. He not only plays the blues, he has lived the blues, he is the blues. If that song doesn’t prove it to even the most staunch naysayer, then the final track, “Faith and Music,” co-written by Shurman, surely will. A mini biography in song, that extols the only two virtues that keep him going.

Lurrie Bell has the gifted talent of making any song his own. The unique covers included on this album,  prove that beyond question. His take on his father’s “Do You Hear,” rattles the windows and shakes the dishes. The Willie Dixon deep cuts, “Sit Down Baby,” and “Hidden Charms,” are done in Bell’s particularly remarkable style, but remain bass heavy and authentic enough to make the big man grin.

One of the outstanding tracks is the Maxwell Street Jimmy Davis classic, “One Eyed Woman.” This one is simply pure Chicago. It’s done in such a quiet, simplistic manner, you can almost hear the voices of Maxwell Street’s long gone fans shouting their approval.

Our personal favorite couldn’t be narrowed down to just one track. Its an official toss up between his cover of the T-Bone Walker tune, “I Get So Weary,” and the co-written Bell and Buster Benton song, “Born With the Blues.”  Bell doubled the length of, “I Get So Weary,” and made it sound nothing like the original. In many cases, the purists may poo-poo such a decision, but in this case, its genius. “Born With the Blues,” is a six-minute ode to the guitar and harp combination that made the blues famous in the first place.

Its been three years since we first laid ears on Bell’s award winning, Blues in My Soul, but Can’t Shake This Feeling, made it worth the wait. The Chicago blues are alive and well, and Lurrie Bell is the pulse. If you haven’t done it yet, buy a copy of this one. Any collection is incomplete without it.