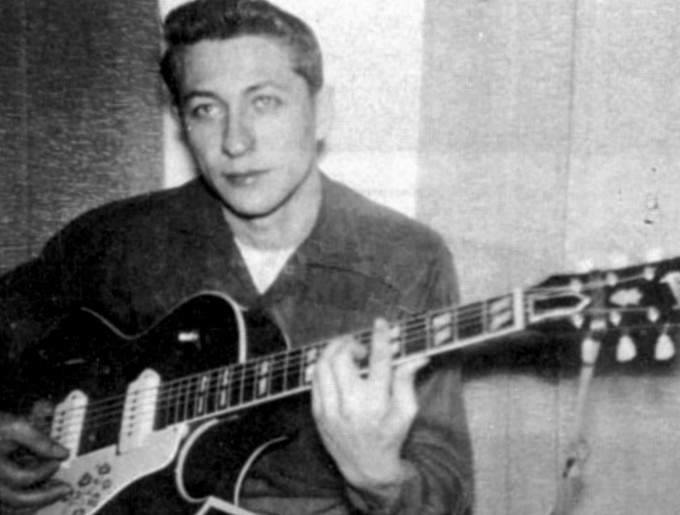 Editor’s Note: Yesterday, December 27th, would have been Scotty Moore‘s 85th birthday. Moore was a guitarist’s guitarist, one of the inventors of rock-a-billy, lead player for Elvis Presley, and an inspiration to generations of musicians to follow. In honor of his incredible influence on the music scene, we offer 10 things you may not know about the man of whom Keith Richards said, “Everyone else wanted to be Elvis, I wanted to be Scotty.”

1. Moore was not a guitar collector, as many artists are today. He actually began his career using a Fender, but it didn’t feel right to him, so he switched to a Gibson ES-295, then the L5, and finally to the Super400, which he played until his last days. He sold off his older guitars as he purchased new ones.

2. He ordered an EchoSonic amplifier from a man named Ray Butts, who had built one for Chet Atkins. Although the original amp was only 25 watts, it had a built-in tape delay system that allowed Moore to replicate the slapback echo sound of the Sun Studio recordings, live. He first used it on the recording of, “Mystery Train,” in July 1955, and continued to use it for every recording and live performance for the rest of his career. His was the third EchoSonic ever built, and it was remodeled due to damage over time, with new cabinets, and two additional 50 watt boosters. Eventually, Butts built 68 such amplifiers, each, one at a time, with artists such as Carl Perkins, Roy Orbison, and Luther Perkins (Johnny Cash’ guitarist), commissioning one for themselves. Moore retired the amp in the early 1990s after it was nearly destroyed by an airline, and finally sold it, privately, in 2008.

3. Moore didn’t play professionally for nearly twenty years. After his last performance with Elvis in 1968, he recorded with Carl Perkins in 1975, on Perkins’, EP Express. With the exception of overdubbing a couple songs for Billy Swann, his next recording session was again with Perkins, at Sun Studios, for 706 ReUnion: A Sentimental Journey, in 1992.

4. When Elvis joined the US Army in 1958, the Blue Moon Boys, made up of Moore, bassist, Bill Black, and drummer, D.J. Fontana, were left hanging. Although Presley was raking in the money, his musicians were all salaried players, and when Presley joined up, their income stopped. It was at this time that Moore bought interest in, and became Vice-President of Fernwood Records. The label was relatively short-lived, producing just one hit record; “Tragedy,” by Thomas Wayne Perkins.

5. After his time with Fernwood Records, Moore went to work for Sam Phillips as production manager of Sun Studios. In 1964, Scotty released an album of instrumentals on the Epic label, called, The Guitar That Changed the World. That release got him fired by Phillips, and Scotty moved to Nashville, opening Music City Recorders. He sold that business nine years later and worked, for many years as a recording engineer. He engineered several television shows for Opryland Productions, featuring artists such Dolly Parton, Carol Burnett, Bob Hope, and Johnny Cash.

6. In 2013, to honor Scotty’s 81st birthday, Gibson released 81 exact replicas of his famous 1952 ES-295 guitar. Each one was played, and signed, by the man, himself. Gibson also threw in a trick bag of extras, including a signed photo of Moore. We found one, currently for sale in the UK with an asking price of just under, $9,000.

8. The use of a root note and the fifth, more commonly referred to as a “power chord,” began with commercial recordings in the 1950s. Although there is some debate on who began using them first, it seems to trace right to Sun Records. Writer and musicologist, Robert Palmer, claims that power chords were first used by Willie Johnson on the Howlin’ Wolf song, “How Many More Years,” in 1951, and then by another Sun guitarist, Pat Hare, on, “Cotton Crop Blues,” by James Cotton in 1954. Rock critic, Dave Marsh, however, gives the invention credit to Scotty Moore, for Presley’s, “Jailhouse Rock,” in 1957. Native American blues rocker, Link Wray, is generally credited for popularizing its use on his 1958 instrumental smash, “Rumble.”

9. Moore, in his position playing behind Elvis Presley, was a salaried musician. He, and the other members of the Blue Moon Boys, received $200 per week, when there were performances, and $100 per week, when there weren’t. When Moore and Black first quit the band, it was a strike for more money. They never did get back on the payroll after that. While Presley was famous for his generosity, handing out diamond jewelry, motorcycles, and Cadillacs to his friends, the band members never received any gifts of that nature. “I honestly don’t think he ever gave us anything,” Moore was quoted as saying. “I’ve never held it against him, but I’ve always wondered why. He was very generous to all his friends, but we always seemed to be in the wrong line.”

10. Although he is usually credited for his guitar work on a handful of Elvis Presley hits, Scotty recorded somewhere in the area of 500 songs with “The King.” Each and every guitar solo he played was off the cuff, ad libbed on the spot. Moore has said he never sat down and played the same thing twice.