National Blues Museum to Host “Women of the Blues: A Coast-to-Coast Collection” Exhibition 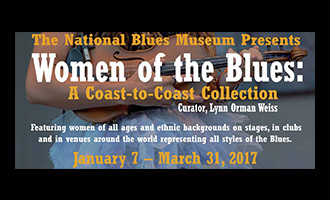 St. Louis, MO – The National Blues Museum has announced its next traveling exhibition, “Women of the Blues: A Coast-to-Coast Collection,” presented by curator, Lynn Orman Weiss. The collection features 60 photographs of ‘Women of the Blues’ of all ages and ethnic backgrounds representing all styles from southern soul blues to Chicago blues & rock blues. The images include artists such as, Mavis Staples and Susan Tedeschi (Grammy winning rock blues icon) to Chicago’s Southern soul blues diva, Nellie ‘Tiger’ Travis, the newly crowned Queen of the Blues, Shemekia Copeland, and many more. This exhibit is dedicated, in tribute, to Koko Taylor’s foundation, Sisters of Royalty.

“This exhibit is the perfect artistic complement to the Women of the Blues section in the museum and we are excited to have it during the time when the country celebrates National Women’s History Month in March,” says Dion Brown, Executive Director of the National Blues Museum.

“I have loved shooting and collecting pictures of blues women and recording their emotions, their beauty, their visceral expressions exuding from their souls,” says exhibit curator, Lynn Orman Weiss. “It is my vision that this exhibit captures the heart of the observer and gives them reason to find out more about these extraordinary performers.”

Sixteen photographers from around the world share their very passionate and powerful images of these extraordinary women, photographed from the stage at the Chicago Blues Festival to the Maui Sugar Mill in Los Angeles, from the Blues Cruise on the Caribbean to festivals on the East Coast.

“You can talk about the Blues without including women, but why? Plus, you really would be doing a disservice to your audience by failing to share all of the complexities of this genre. The women throughout this exhibition, and all women of the blues, add a different kind of emotion and another dimension to this unique art form,” says Jacqueline K. Dace, Director of Internal Affairs with the National Blues Museum.

The “Women of the Blues: A Coast-to-Coast Collection” kicked off on June 8th, 2016 in celebration of Chicago Blues Festival. The collection debuted at Firecat Gallery and on the jumbotron at Chicago Blues Festival and will make its St. Louis debut at the National Blues Museum on January 7, 2017. The exhibit will be housed in the Scott and Diane McCuaig and Family Gallery through March 31 and is sponsored in part by Barbara Hammerman and Amanda Gresham.

“Women of the Blues: A Coast-to-Coast Collection”