Language of the Blues: VOODOO 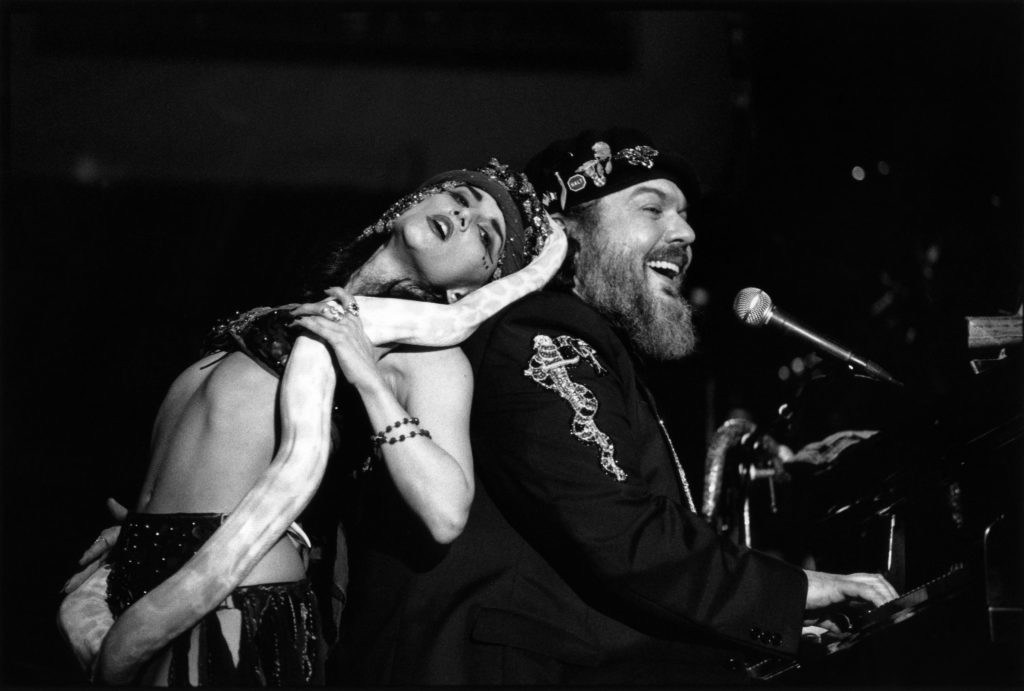 Voodoo is a religion that evolved in the Americas from West African Vodun, one of the world’s most ancient religions.The defining Voodoo experience–possession–is the source for the idea in the blues (and later in rock ’n’ roll) that a musician’s highest attainment is to connect with the soul, and be so possessed by this connection that it animates and drives his or her performance.

The Vodun religion originated among the Fon-Ewe people of the former West African Kingdom of Dahomey, a country known today as Benin. The Fon word vodu means spirit, or deity. Vodun means God or Great Spirit. This supreme creator is represented as a giant snake

named Dan that supports the universe with its coils. Today, in Haiti and in American Voodoo strongholds like New Orleans, Dan is worshipped as Damballah, the Grand Zombie.

Vodun was transplanted to America and the Caribbean when the Dahomey conquered their neighbors, the Ewe, in 1729 and traded their prisoners-of-war with slavers in exchange for European goods. Many Dahomey people were also captured and traded into slavery.

These enslaved people found themselves en route to French and Spanish colonies in the Caribbean. Slaves in the largely Catholic West Indies were forbidden on pain of death from practicing their “heathen” religion. But they quickly grasped the similarity between the Vodun tradition of praying to ancestral gods called loa to intercede in their favor with God, and Catholics praying to their saints for similar intercession. By superimposing Catholic saints over the loa, slaves created a hybrid religion called Santeria (saint worship) in the Spanish Islands and Vodou in Haiti. (The Creole or “Kreyol” spelling of “voodoo” is Vodou.)

Threatened by the Haitian slave revolt, the United States and Western Europe slapped punitive sanctions on Haiti, turning the prosperous colony into an impoverished state unable to sell the products of its fields. In addition, in 1852 France demanded that Haiti pay reparations of 90 million gold francs ($21.7 billion today) to former slave owners. Haiti has yet to recover.

The sensationalistic book Haiti or the Black Republic, written in 1884 by S. St. John, portrayed Vodou as an evil devil-worshipping cult. The book contained gruesome descriptions of human sacrifice, cannibalism and black magic; some of which were extracted from Vodou priests by torture à la the Spanish Inquisition. The book later became a popular source for Hollywood screenwriters, who began churning out voodoo horror flicks in the 1930s.

In the North American colonies, meanwhile, slave owners beat and executed West African slaves who were caught practicing their religious traditions. These were characterized by whites as barbaric, primitive and sexually licentious.

In actuality, Vodou possession is not the demon-possession portrayed by Hollywood movies, but is the same state of union with the divine sought in most spiritual practices. It is akin to becoming “filled with the Holy Ghost” in the Pentecostal Christian tradition, reaching the Buddhist state of nirvana, or attaining the yogi’s divine bliss, samadhi.

The chanting, drumming, singing and dancing of Vodou ceremonies are efforts to reach higher levels of consciousness. The priest or priestess attempts to invoke the loa to descend the centerpost of the hounfour (temple) and possess or “mount” members of the congregation. A loa will only descend to ride the body of the worshipper prepared to attain a state of ecstatic union with the divine. The morality implicit in this is stated in the Haitian proverb, “Great gods cannot ride little horses” and is expressed in some “riding/rider” metaphors in the blues.

Vodou arrived inLouisiana in 1800 in the form of Marie Laveau, a Haitian who had played an important role in the Haitian revolution. In 1809, Vodou arrived in New Orleans en masse when Haitian slave owners who had escaped to Cuba with their slaves during the Haitian revolution were expelled from Cuba. Many fled with their slaves to the French- and Spanish-speaking port city of New Orleans, where the Vodou religion quickly spread. by 1890, Laveau’s granddaughter was the legendary Voodoo Queen of New Orleans.

Today an estimated fifteen percent of New Orleanians practice Vodou. It is also popular in other North American cities with significant African and Haitian communities. Vodou is practiced by roughly 60 million people worldwide, not only in Benin and Haiti, where it was officially sanctioned as a religion in 2003, but in the Dominican Republic, Puerto Rico, Cuba, Brazil, Ghana, and Togo. In Brazil, Vodou is called Candomblé. In the English-speaking Caribbean, it is Obeah.

In the United States, Vodou has exerted a powerful influence on what writer Michael Ventura calls “the metaphysics of American music.” Ventura wrote in his brilliant essay “Hear that Long Snake Moan,” that the 20th Century would “dance as no other had, and, through that dance, secrets would be passed. First North America, and then the whole world, would–like the old blues says–‘hear that long snake moan.’”

The Language of the Blues: From Alcorub to Zuzu Vodou Voodoo
Share. Facebook Twitter Pinterest LinkedIn Tumblr Email WhatsApp
Previous Article“Take Me To The River” Live at GRAMMY Museum® Mississippi
Next Article On the Road with Southern Avenue June 6th – 12th