Language of the Blues: WASHBOARD 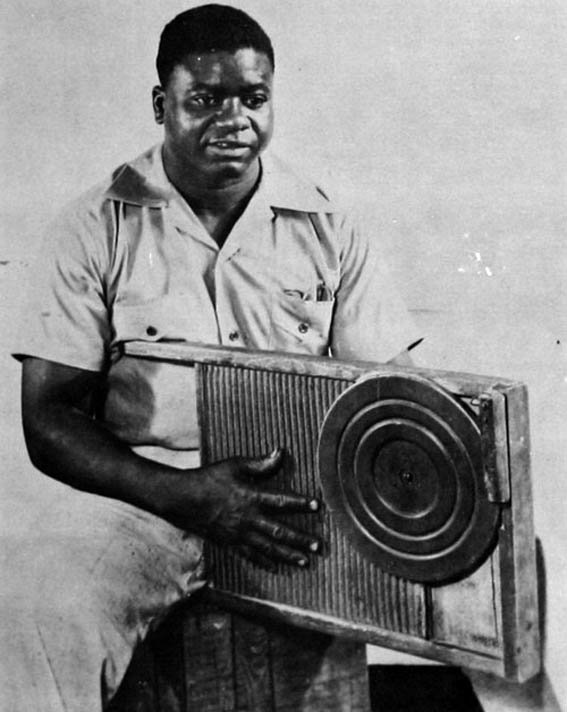 A washboard is a wooden or metal board played as a percussion instrument with thimbles, spoons, knitting needles, or metal finger picks. Also called a rub board, it’s a staple of zydeco, the accordian-based dance music of southern Louisiana Creoles.

In The Roots of the Blues, musicographer Samuel Charters described seeing “four men rattling on dried calabashes with metal finger rings” during a Fula dance near the River Gambia in the same fashion that African American percussionists in the 1920s played washboards with metal strips wrapped over their knuckles.

The most popular blues washboard player was hokum artist Washboard Sam, who recorded hundreds of records in the late 1930s and 1940s, mostly with Big Bill Broonzy. Washboard Sam (born Robert Brown) was the illegitimate son of Frank Broonzy, who also fathered Big Bill Broonzy. Sam was raised on a farm in Arkansas and moved to Memphis in the early 1920s. There he met Sleepy John Estes and Hammie Nixon. The trio busked on street corners, collecting tips from passersby.

In 1932, Washboard Sam moved to Chicago. At first he played on the streets for tips but soon he began performing regularly with Broonzy. Within a few years Sam was supporting Broonzy on the guitarist’s Bluebird recordings. Washboard Sam went on to accompany many different musicians on their recording sessions, including pianist Memphis Slim, bassist Ransom Knowling, Bukka White, Willie Lacey, and Jazz Gillum.

Video:
Washboard Sam & Big Bill Broonzy – “All By Myself”