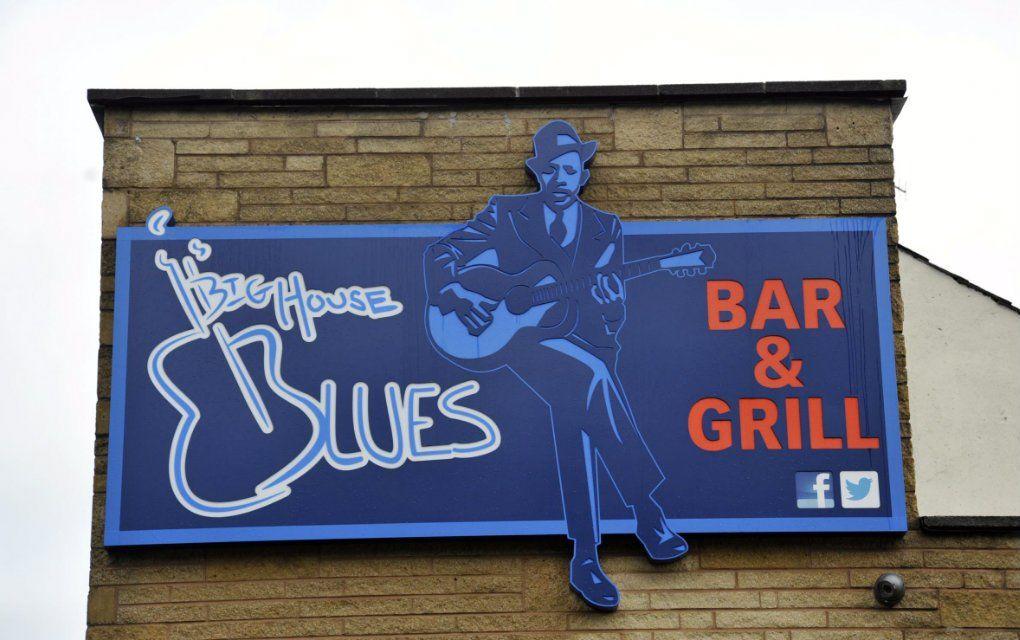 Darwen is a quintessential British town in the center of Lancashire County. It’s home to the Jubilee Tower, and an Andrew Carnegie commissioned library. The Beatles once played there, back in 1963. The town also has its own music school, and is home to one of the oldest brass bands in the country.

Now, a decidedly American influence has emerged. The Big House Blues Bar & Grill opened for business on August 4th. The building began life as an historic Catholic Club, built in the 1920s. Having closed three years ago, it was purchased by two blues loving business partners. Eddie Valentine, and Sam Cooper purchased the aging edifice in November, 2015, with one thought in mind. They wanted a blues club.

Cooper, now 57, claims, “It’s a life’s dream this place, ever since I was in my teens.” The owners have decreed that it is a true blues bar, playing nothing but blues music.

Outside, the blue colored sign sports an image of Robert Johnson. Perhaps a nod to the man, who legend holds, made a deal with the devil. Could be a sly nod to the main road through the town, A666, which runs North to Blackburn, and South to Bolton. Either way, there’s no mistaking Cooper and Valentine’s intent.

The acclaimed blues, and R&B band, The Stumble, performed on opening night. Keep in mind, that this is the band Lazy Lester wanted to bring back to the States with him. They are also “one of the strongest live acts that the genre can boast in the UK,” according to several blues press outlets. That’s how you open a new club.

The building has been given a complete facelift, and the club is bright, shiny, and clean. Perhaps not what one would expect who may be used to the more primitive surroundings of a Southern juke joint, but the requisite photos, instruments, and signage are on display. A large black on white sign above the bar bears the mythic, and anonymous quote, “The blues been here since time began. Since the first lyin’ woman met the first cheatin’ man.”

The bar plans to be open Thursdays – Sundays, with a menu that includes burgers, chicken, and ribs. Visitors to the Big House, will also be entertained with live music every night they’re open.

Paying proper homage to the origins of the genre, the Big House will undoubtedly become the watering hole of choice, for blues loving Brits.