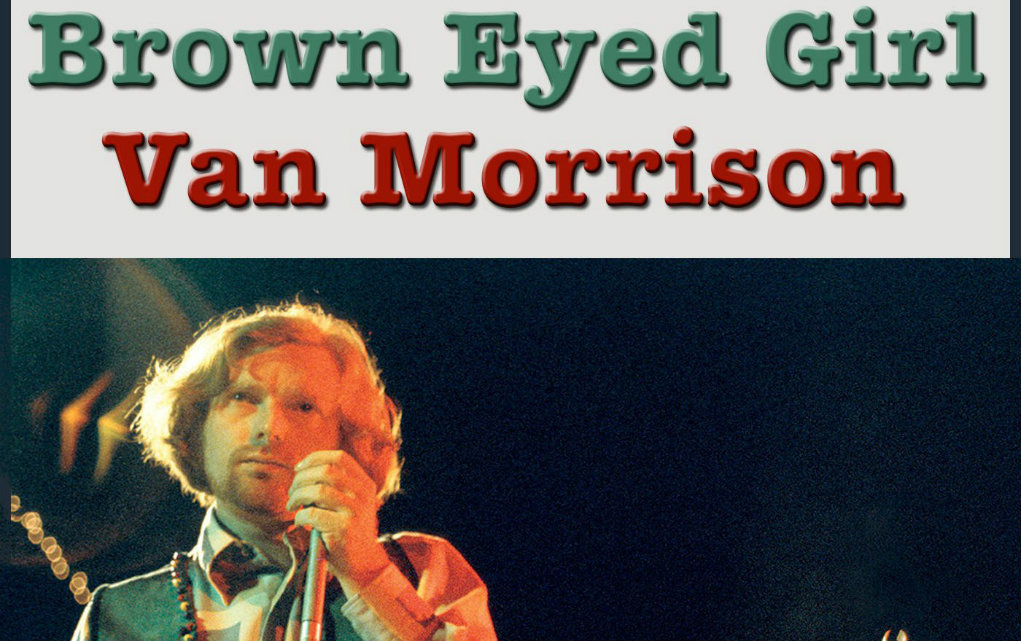 Van Morrison had left Ireland and his band by the spring of 1967, and recorded “Brown Eyed Girl” on March 28th at A&R Studios. The 22nd take captured the sound producer Bert Berns was looking for.

Berns had previously produced several tracks for Morrison’s band Them, and wrote the hit, “Here Comes the Night.” A gifted songwriter, Berns was also an independent producer who worked with myriad labels. He now owned Bang Records, and convinced George “Van” Morrison to sign as a solo artist on his label. This initial recording session was to cut eight songs, to be released as four Van singles.

Berns had spent time in Havana, exposing himself to intense, burning, Afro-Cuban rhythms, which he brought with him back to New York, and into rock ‘n’ roll. The fiery mambo beats that he injected into nearly everything he touched were also in “Brown Eyed Girl.”

What Van Morrison sarcastically refers to as “the money song” had a stellar lineup of session artists backing it. Eric Gale, Al Gorgoni, and Hugh McCracken lay down what are quite possibly the best rhythm guitar tracks ever. Russ Savakus played bass, Paul Griffin played piano, and Gary Chester played drums. Those heavenly back-up singers were none other than The Sweet Inspirations, made up of Myrna Smith, Estelle Brown, Sylvia Shemwell, and Emily “Cissy” Houston (mother of Whitney Houston and auntie to Dee Dee and Dionne Warwick).

Peaking at #10 on the Billboard Hot 100, “Brown Eyed Girl” was not Morrison’s highest charting song. That honor goes to “Domino,” which reached #9 in 1970. However, it is one of the most played songs in history, garnering, at last count, well over 10 million US radio airplays. It’s been inducted into the GRAMMY® Hall of Fame, listed as one of the “500 Songs That Shaped Rock and Roll” by the Rock and Roll Hall of Fame, and reached number 110 on Billboard Magazine‘s “500 Greatest Songs of All Time.”

As a result of the contract with Bang Records, Morrison never saw a penny of royalty money for writing or recording the song. Furthermore, it became the lead track on the album, Blowin’ Your Mind, which Berns released without Morrison’s knowledge or consent, in September of 1967. Adding insult to injury, Morrison claims it’s not even among his favorite songs. In a 2009 interview with Time Magazine, he is quoted as saying,

It’s not one of my best. I mean I’ve got about 300 songs that I think are better.

Originally titled, “Brown-Skinned Girl,” the rhythms closely resemble those of Bahamian guitarist Joseph Spence’s “Brownskin Gal,” from 1958. Morrison, however, changed the title to “Brown Eyed Girl” when he finished recording it. This leaves us pondering a couple questions. First, why change the title after recording it? Considering that there is no mention of a brown-skinned girl anywhere in the lyrics, changing the title seems unnecessary. Unless, of course, it was a bit too much like Spence’s original composition. Secondly, was it actually titled “Brown Skinned Girl,” in the first place?

Van, who is known for his loathing of personal interviews, at various times did remark on the change.

Even with Van’s explanation, lyrical dilettantes continue to pose the question, “Is the song about a black girl?” Experts in music and race relations have pointed out similar titles, most notably Chuck Berry’s, “Brown Eyed Handsome Man,” as a possible yes. Morrison’s earliest musical influences were artists such as Jelly Roll Morton, Lead Belly, Ray Charles, and the great Piedmont blues duo, Sonny Terry and Brownie McGhee. It was American blues, jazz, gospel, and soul music, performed almost entirely by black artists, that set Morrison on a musical path. Without confirmation from Van, there is truly no way to know.

What we do know is that the lyrics are nostalgic. Most of Morrison’s catalog is filled with wistful lyrics about his home in Northern Ireland, so she may have been a Belfast girl. According to Stuart Bailie of the Oh Yeah Music Center, “I’d like to think it’s about Belfast and that the stadium he refers to may have been The Oval in east Belfast.”

When released, the song about a former lover was too explicit for radio airplay. In the third verse, the lyrics, “making love in the green grass,” were edited out, and replaced with a combination of lyrics from the first verse — most often it was heard as, “laughin’ and a-runnin’, hey hey,” instead. Thankfully, most classic rock stations now play the original “Brown Eyed Girl.”

Could the “Brown Eyed Girl” be Julie, the subject of the nearly 10 minute, blues-influenced track “T.B. Sheets” that was recorded at the same session? This disturbing song is the true story of a girl with whom Morrison once lived, now dying of tuberculosis. Van witnesses her suffering, but all he can think about is how it affects him. A bleak and powerful strain, Morrison broke down and had to cancel the rest of the session after recording it. Maybe “Brown Eyed Girl” was thinking back on happier times with Julie?

Knowing his love of nostalgic lyrics, Morrison may have combined childhood memories with a woman he loved at the time of recording. In 1967, although no actual dates could be found, Morrison met Janet (Planet) Rigsbee. They wed shortly thereafter, saving Morrison from being deported. They were married for six years, and had a daughter together, Shana Morrison, who is an accomplished singer/songwriter in her own right. From the few pictures that were taken of the couple (Morrison is painfully reclusive) Janet is an attractive, and very brown-eyed girl.

However, Ralph McLean, of BBC’s Radio Ulster has said, “Morrison’s songs are best when full of intrigue.”

Perhaps we’ll never know who the famed “Brown Eyed Girl,” was. She may have been nobody at all, and instead a poetic muse created in Morrison’s mind. It wouldn’t be the first time his lyrics both fascinated and confused listeners. When pressed to explain some of his more mysterious lyrics, Morrison told Cameron Crowe for Rolling Stone in 1977:

A lot of times people say, ‘What does this mean?’ A lot of times I have no idea what I mean. If you can’t figure out what it means, or it’s troubling you, it’s not for you. Like Kerouac, some of his prose stuff, how can you ask what it means? It means what it means. That’s what I like about rock & roll– the concept–like Little Richard. What does he mean? You can’t take him apart; that’s rock & roll to me.

Whoever she is, Van’s “Brown Eyed Girl” takes us back time and again to a happier place in our own lives. For that we’ll be ever thankful to Sir George Ivan Morrison, and ever in love with his “Brown Eyed Girl.”