Danielle Nicole Steps Out of the Box and Into Herself 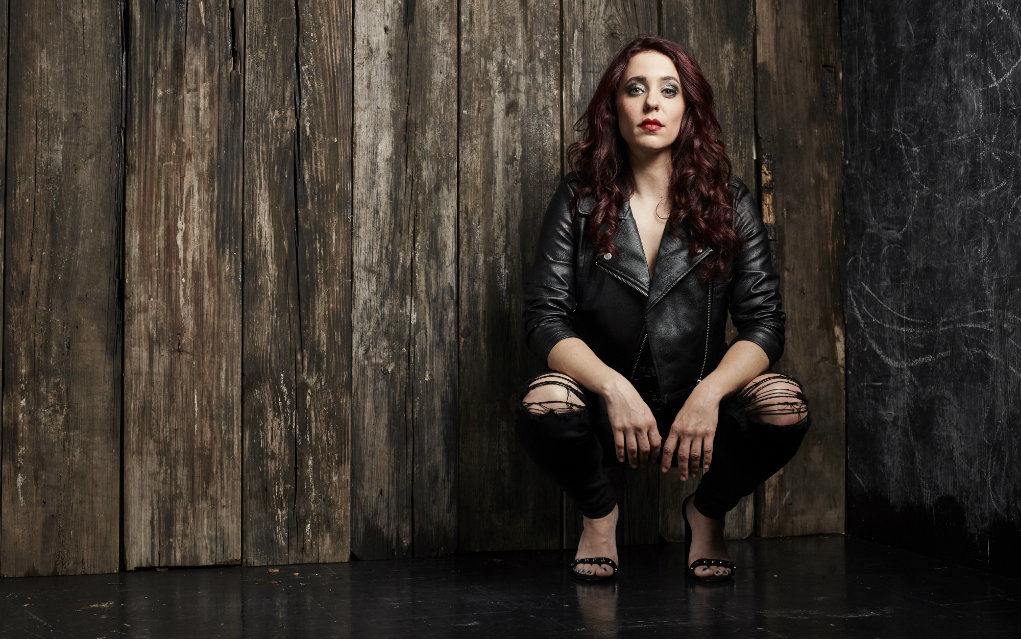 We were able to catch up with the very busy Danielle Nicole by phone, early Fat Tuesday morning. She and her brothers had just taken part in the 30th Legendary Rhythm & Blues Cruise with a Trampled Under Foot reunion performance. Now she was gearing up for the release of her album, Cry No More.

Good morning Danielle. Are you up doing some early Mardi Gras partying?

Ha ha. No. I actually just got back to town less than 48 hours ago. I’ve sent my six year old off to school, and am hanging out with my two year old. I’m a mama right now.

You were on the Legendary Rhythm & Blues Cruise. How was that?

It was good. I think it was definitely a proper ending for Trampled Under Foot. We’ve always loved the Blues Cruise very much, and kind of feel like ‘children of the cruise’. After nine years of doing cruises, we knew it would be great. We’ve done one almost every year since we started in 08, so it’s always been a huge fixture in Trampled Under Foot. Beyond that, I got to sing with everybody. I was singing with Victor Wainwright, and got to jam with Southern Hospitality, and Tommy Castro. You’re on a ship for a week, so you get to jam and hang out with people you don’t normally get to.

The cruise is really a life-changing experience. I made it a point to see as many shows as I could because it was such a great lineup. I got to see Zac Harmon, and he and his band are just insane. I walked away from that performance feeling like a different person, and I’m a musician. From a cruiser’s standpoint, it’s incredible.

Your new release Cry No More hits the streets on February 23rd. What kind of reception are the new songs getting on tour?

The new material is getting a great reception. I definitely reached out a lot more, sonically speaking. This album is a different sound for me. I mean it’s still a lot of my own writing, and I feel that as long as I’m being true to myself, my sound will always be there. But there are some tracks that are far away from the rock blues or groove blues that I’ve been typically known for. I also steered away from a lot of ballads, that I’ve been known for in the past as well. It’s not that I’m showing a different side of myself, but the growth I’ve experienced since branching out from Trampled Under Foot. These are all new songs.

How does it differ from Wolf Den?

My ‘Wolf Den’ release was a compilation of newly written songs with Anders Osborne, and a bunch of old songs that I had written while still with Trampled Under Foot, but were never cut. In TUF I was sharing the front position with Nick, so I only put up six songs per record instead of 12. When it came time to do ‘Cry No More’ I used all brand new songs that I’ve written over the last two years. I’ve been through life changes, and I’ve been fronting my own band for over two years now. When touring with my brothers, it was a democracy. I didn’t mind being in a band. I loved sharing the stage with them. They’re my brothers. Now, I take 100% of the responsibility. It’s also 100% of the satisfaction in being able to write the music and find my own sound.

But it’s still based in the blues?

The blues will always be there. There’s still a ton of blues in ‘Cry No More’. Like “Crawl.” It’s heavy rocking, but it’s still bluesy.

That was a great way to kick off the new album by the way.

We thought so too. My brother Nick guests on that track, playing guitar. There are only two people that play guitar more than once on the new album. Johnny Lee Schell, who also engineered it, does a ton of guitar work on it, and Monster Mike Welch is on two songs. Other than that, there’s basically a different guitarist on every track. Walter Trout, Sonny Landreth, Luther Dickinson, Kenny Wayne Shepherd, my guitarist Brandon Miller, are just some of the guys that guested on this release. Mike Finnigan, Kelly Finnigan, and Mike Sedovic all played keys on it. My producer Tony Braunagel played drums on all the tracks. I’ve never been in a position where I could say, ‘Hey, let’s bring a ton of guests in on this project.’ It ate the shit out of the budget, but it was well worth it. There was only one bass player though.

That’s all you needed. Did you have a specific goal in mind when recording this album?

I really wanted to just explore. I wanted to do whatever I wanted. A good example is the song, “How Come U Don’t Call Me Anymore.” When I flew into town, I was eating dinner with Tony, and I was talking about an Alicia Keys tune. Tony said, ‘Oh my God. I’ve been wanting somebody to record her version of Prince’s “How Come U Don’t Call Me Anymore,” forever and nobody will do it.’ I was like, ‘That’s a great song. Let’s do it’. My label, Concord Records, let me have complete creative control. I was able to pick every single song. I still can’t believe how much they championed me.

What was one of the most difficult things about the recording process for Cry No More?

I always have a hard time trying to harmonize with myself and record my own backing vocals. That’s probably the most difficult thing I face. That being said, working with Tony again as producer on this album made things feel like going back home. Tony has known me, and my brothers, since 09. He’s worked with us, knows our personal stuff, and has a sensitivity to my writing. But, he’s also a hard ass. If I’m not singing it right, he busts my chops with something like, ‘You know what? You’re not doing it right. Get your head in the game and just sing the song’. Another thing that helped was bringing in two phenomenal women, Maxayn Lewis and Kudisan Kai to sing backup.

What’s your personal favorite song on the record?

It would be “Bobby.” I know it’s the most sonically different from anything I’ve ever done before. I wrote that song about my dad. After I wrote it, I kind of kicked myself in the ass wondering why I didn’t channel this outlet 18 years ago. It began with a single lyric and just came together after that. I was actually hesitant to bring it to the table at first, but I had to trust my gut. I couldn’t be happier with how it turned out.

Having toured all over the world, what’s your favorite place to play, other than Knuckleheads?

Oh man, that’s not fair! I mean there’s the Blues From the Top Festival in Winter Park, Colorado. There’s Narrows Center in Fall River, Massachusetts. It’s hard to choose because so many venues are great for so many different reasons. This is like asking an artist what their favorite color is.

Cry No More was released today, February 23rd, 2018, via the Concord Records label and is available everywhere.

What are your favorite songs from, or memories with Danielle Nicole? We’d love to read your comments below.