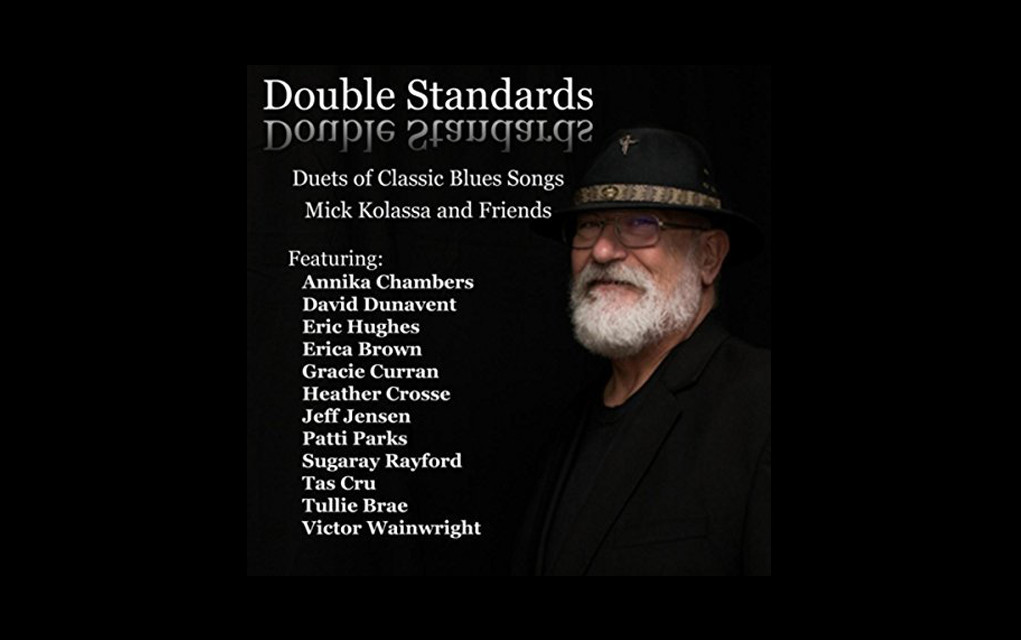 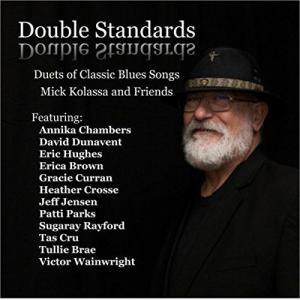 Double Standards is a simple concept: singer Mick Kolassa duets on blues standards with talented colleagues. The result is a deceptively complex album of compelling takes on great blues songs, with Kolassa’s raspy tone surprising the listener with a jazzy delivery.

It should come as no surprise that the album is complex. The same could be said of Kolassa, who, in addition to his life as a blues singer, is a pharmaceutical marketer, moving from his PhD in 1995 into teaching, and then into the pharmaceutical industry, where he’s credited with inventing the United States’ current drug pricing model, which is based upon the usefulness of a drug. It’s an atypical path to the blues, and while one might want to push back against the idea that someone with an extensive and impressive resume selling legal drugs can create authentic blues music, the fact of the matter is that Kolassa (and Double Standards) are the real deal.

Kolassa’s vocals are responsible for most of the album’s success. His voice is rich and emotive, making the most of a narrow range in a way that evokes Muddy Waters. Kolassa also has a great sense of phrasing, using long, mellow, jazzy takes with his gritty vocals to create a compelling jazz-blues hybrid. This is most noticeable on his version of “Fever,” performed with Annika Chambers, and inspired by Peggy Lee’s sexy cover version. Kolassa plays with very mellow reads on the lyrics which juxtapose nicely with Chambers bluesy, powerful lines.

Kolassa and his producer/guitarist Jeff Jensen do a lot of clever jazz/blues juxtapositions throughout the album. “Spoonful,” covered from everyone from Howlin’ Wolf to Cream, features Kolassa’s growl over a jazz arrangement, with shimmering guitar and long, sustaining organ glides over the verses before going full blues in the chorus. Erica Brown, who has a perfect blues voice, provides her own contrast over the same relaxed verses.

The album has other nice surprises. The cover of “Nobody Knows You When You’re Down and Out” features lovely violin courtesy of Alice Hasan. The violin provides an interesting vibe that’s equal parts Celtic and hot club jazz. Guest vocalist Tas Cru provides the co-vocals on this track, sounding a lot like Eric Clapton.

The challenge of an album of standards is that listeners are very familiar with the songs, perhaps even having favorite versions. Kolassa wisely reinterprets the songs, taking them in a new enough direction that the album feels fresh and engaging, but not reinterpreting them past the point of recognition. The result is a clever album that manages to feel comfortable without being dull.