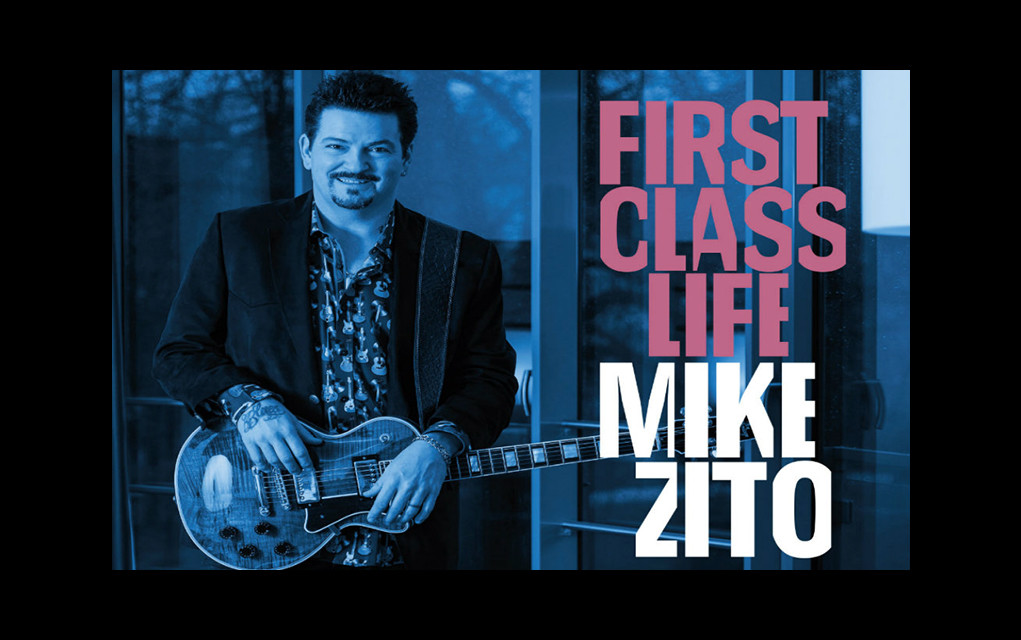 Blues-rocker Mike Zito will release his new album via Ruf Records on May 11th. First Class Life marks the return of Zito to the genre he loves the most, the blues.

“The title track is a nod to where I’ve come from and where I’m at,” Zito explains. “It’s a rags-to-riches story, and it’s true. I grew up poor in St. Louis, and now I’m traveling the world to sing my songs.”

Most bluesmen never made it from rags to riches. A few surely did, but for the majority, the story was rags-to-slightly-nicer-rags. It all depends on how one defines riches. For Zito, it’s a comfortable Texas home, a loving, supportive family, and enough cash to be able to help his fellow human beings in need.

“I stole from the rich, and baby I gave to the poor,” he sings on the title track. Although he keeps his generosity on the down-low, Zito was “instrumental” in assisting his fellow musicians in the wake of the Houston area floods. That may be the reason he’s been given a “second chance at living a first class life.”

First Class Life kicks off with “Mississippi Nights.” It’s sweet party shuffle that lyrically gives props to some of the greats of the original blues. Muddy Waters, Howlin’ Wolf, Robert Johnson and the devil are all given their due. With it’s grimy slide work, “Mississippi Nights” would be right at home in any Delta juke.

Mike proves he has soul with his killer cover of Bobby “Blue” Bland‘s “I Wouldn’t Treat a Dog (The Way You Treated Me).” Replacing the original horns with some killer guitar, it’s a 21st Century upgrade that still has a pure Memphis feel.

“The World We Live In,” is a lyrically dark slow-grind. Another Memphis flavored tune, it conjures the ghost of B.B. King, complete with the King’s signature vibrato. “Time For a Change” is more upbeat, but still calls the world out on its current situations. As long as there are troubles in the world, blues songwriters will expose them. Zito accomplishes the task while keeping a dance beat. Not a simple task.

On the subject of calling the world to task, Zito gives us “Old Black Graveyard.” With the sound of a cemetery at midnight, Mike paints a vivid, true-to-life portrait of a burial ground in his own neighborhood. Toppled headstones and unkempt bluesmen’s graves set the scene for the ghosts who haunt it to this day.

Not all the songs on First Class Life are so gloomy. “Dying Day” is an upbeat allegiance to his wife, Laura. “Back Problems” brings the funk, decorating its double-entendre lyrics.

Perhaps showcasing his well-known sense of humor best is “Mama Don’t Like No Wah Wah.” Written with Bernard Allison, it’s a true story. “Bernard told me about his first gig as guitarist for Koko Taylor,” laughed Mike. “Koko didn’t like any effects on the guitar, she wanted it to sound natural. When Bernard made an attempt to use an effect on his guitar after playing with her for months, he got caught. ‘Mama don’t like no wah wah’ is what he was told. That’s a song to me!” The two guitar masters trade licks and Allison cuts loose on an effects driven solo, with no apologies to “Mama.”

“Damn Damn Shame” takes us into the after hours of the party. That slow, belly-rubbing music where sweat and panties drop to the dancefloor. The closer is the double-shuffle “Trying to Make a Living.” The honky-tonk piano mixes with Zito’s rockabilly guitar licks for the perfect ending track – one that leaves us wanting more.

First Class Life brings Zito full-circle. The praise he receives from the blues community, his fans, and his fellow musicians is well earned, and this album proves it. Mike Zito’s return to the blues is, in a word, triumphant!