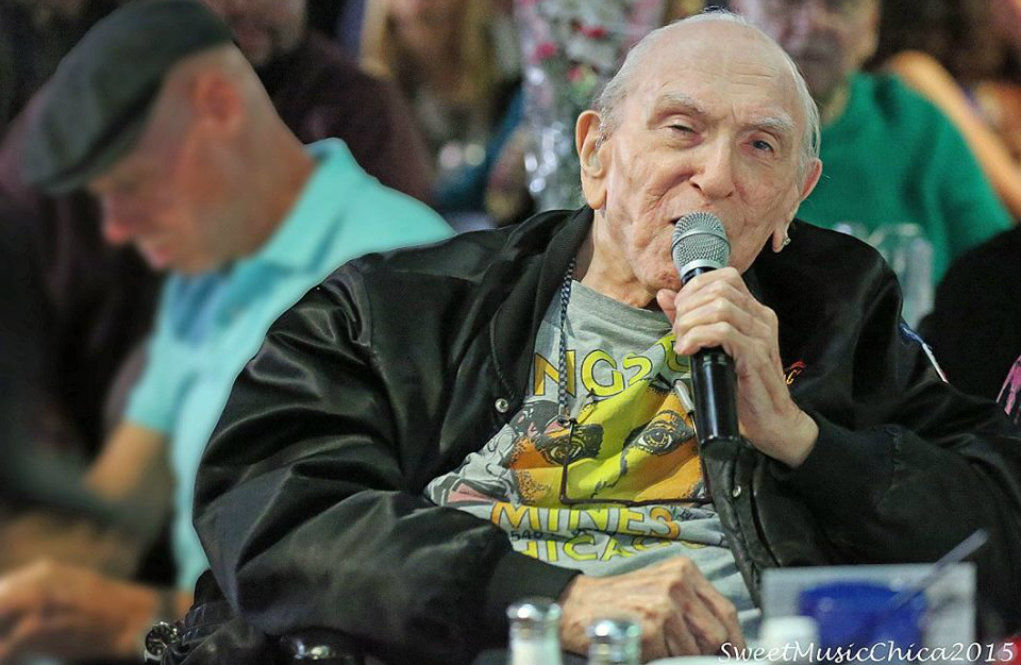 Lenin “Doc” Pellegrino, founder and owner of Kingston Mines in Chicago has died. He was 92. The word came on Thursday morning via Facebook from his son Frank, “Dad now belongs to ages…Farewell sweet prince.”

Pellegrino earned his nickname legitimately. A practicing MD for over 3 decades, he was filled with stories that he loved to share. Many times, he waived his fee for folks who came to him with medical issues, but couldn’t afford to pay. He was also filled with love and passion for the blues. His club, Kingston Mines, is the largest and oldest continuously operating blues club in Chicago. It was also the first blues club to open up on the Windy City’s North Side.

Doc kept things simple at Kingston Mines. The club motto, “Hear Blues – Drink Booze – Talk Loud – You’re Among Friends!” laid out his basic philosophy. Hearing blues is no problem. The Mines provides live music, from two bands on two stages, 7 nights a week. Even past the age of 90, Doc lived above the bar, and would come down in his wheelchair to enjoy the music, and the company.

Magic Slim, Koko Taylor, Sugar Blue, Billy Branch, Junior Wells, Mike Wheeler, and scores of other Chicago greats have graced the stages. The club won several awards, including Chicago awards for Best Blues Club, Most Popular Blues Club, and Torch Bearer of Blues in Chicago. In 2014, Kingston Mines was also presented with a Keeping the Blues Alive Award from the Blues Foundation.

Slide guitar virtuoso Joanna Connor began playing at Kingston Mines in 1985, and has never left. “I started off at the Kingston Mines with Dion Payton and the 43rd Street Blues Band – we really started off at the Checkerboard and then went to the Mines on Thursday, Friday and Saturday,” Connor said in a 2015 interview with Blues Blast Magazine. “Which is kind of funny, because that was in 1985 and here I am in 2015, playing those same nights with my band at the Mines.”

“I have noticed from traveling all over between 1988 and 2005 that the blues crowd is pretty much my age, or older; like 40-plus years old,” she continued. “But at the Kingston Mines, the owner – Doc Pellegrino – was smart enough to encourage the college-aged crowd to come in, by letting them in for free during the week. The hours help too; it’s open until like five in the morning. Once it hits around 11 p.m., the majority of the crowd I’m playing for is between 21- to 30-years-old.”

The Kingston Mines Facebook page posted a statement yesterday morning as well. Jeannie Oakes wrote, “I met some of my closest and dearest friends while working at Kingston Mines and was introduced to the greatest music and musicians on Earth because of his vision. If it weren’t for Doc, this city would never have been what it was and still remains to be. I am forever in debt to him and his amazing contributions to the music scene in Chicago as well as all the stories and memories that go along with it.”

Pellegrino was still a practicing physician when he opened the club nearly 50 years ago. During the lean years, he funneled money from his practice to keep the club afloat. “In the beginning it was a struggle,” Doc said. “Not many people knew about the blues, when we opened up the first blues club on the North Side. People were touchy about it. They didn’t know how to deal with a doctor. If I was just a nobody, they would have killed me. They were afraid of what I was doing. I had all black musicians. About half my employees were black. I had declared it, and still do, as an inter-racial club.”

Doc was also a World War II combat veteran, and a civil rights advocate. He was all about having a good time, and leaving things better than he found them. “We’re only on the Earth for not a very long time,” he said. “You should make the time you spend on Earth productive. Things should be somewhat better when you leave then they were when you came in. I’ve done my best to follow that. I’ll tell you I’m the luckiest guy in the world. I do what I like, I do it well, and I make a living at it.”

Anyone who has seen a show at Kingston mines is familiar with the sign hanging on the back wall of the stage. “Doc’s Motto: Illegitimus non Carborundom.” Latin for “Don’t let the bastards grind you down,” it sums up in 3 words what Doc Pellegrino stood for. He’ll be greatly missed.