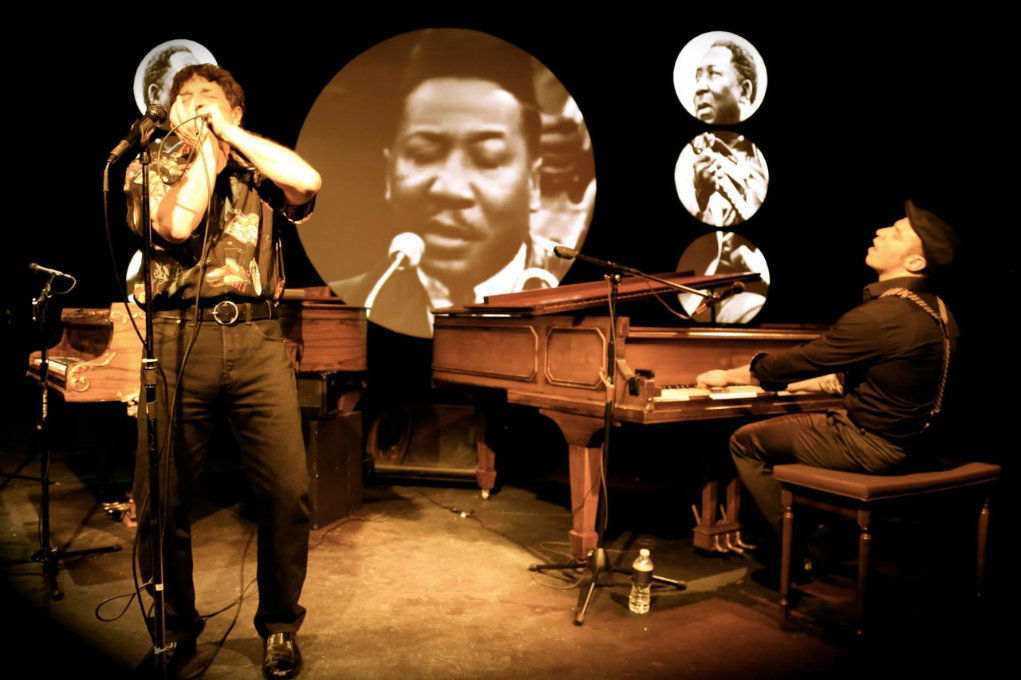 Two of the greatest exponents of boogie-woogie piano currently working in the field will team up later this month for two special concerts that are sure to delight connoisseurs of the genre. “Boogie” Bob Baldori and Arthur Migliazza, known when they work together as the Boogie Kings, will reprise selections from their widely acclaimed off-Broadway production Boogie Stomp! at the Summer Solstice Jazz Festival in downtown East Lansing, Michigan on June 22nd at 7:30 p.m. The action shifts to the Windy City on June 23rd when the duo brings Boogie Stomp! to PianoForte Chicago, located just south of the Loop, at 7 p.m.

The brilliant music served up by this pair of piano masters is thoroughly steeped in classic tradition yet retains its contemporary edge. “This is American roots music, and it’s blues, boogie, jazz, swing, stride, rock and roll, rhythm and blues, gospel, all those things,” says Baldori. “They have the same basic elements: rhythm, improvisation, and syncopation. Those are the basic elements of all those genres. And we show during the course of our performance how they all are seamless.”

Baldori and Migliazza teamed up half a decade ago. Along with their 2015 off-Broadway triumph at the Elektra Theatre, they’ve brought their combined piano thunder to some mighty exotic locales. “We toured Russia five times in the last seven or eight years,” notes Baldori. “The Europeans and the Russians are real students of the history of these genres.”

Baldori’s interest in the ivories ignited at age three. “My grandfather had one of those old player pianos where you push on the pedals,” he says. “I’d be watching the keys, learning how to play the stuff.” Along the way, Baldori also learned how to play blues harmonica.  “I fell in love with Little Walter and both Sonny Boy Williamsons,” he says. “Corky Siegel and I have been friends since we were kids.”

Growing up in Dearborn and East Lansing Michigan, Baldori was deeply influenced by the pioneering rock and roll of Chuck Berry. He formed a rock band, the Woolies, along with his guitar-playing high school-age brother Jeff, drummer Bee Metros, and vocalist Stormy Rice, that scored a national hit in 1966 with their rendition of Bo Diddley’s “Who Do You Love,” for Lou Adler’s Dunhill label. In addition to their own touring, they were recruited by Berry to be his backing band. “It was a perfect fit,” says Bob, who continued as Berry’s pianist long after the Woolies quit the road. “It ended up being a 50-year relationship.”

Prior to joining forces with Migliazza, Baldori honed his four-handed boogie skills to a razor-sharp edge with iconic Detroit pianist Bob Seeley. “I was touring for almost 10 years with Bob,” Baldori says. “He’s considered with good reason the last living link to the origins of boogie-woogie.” When he wasn’t on the road, Baldori produced other artists at his still-thriving recording studio, which he founded during the ‘60s; wrote and starred in the ‘90s musical theatrical production I’m Almost Famous, and somehow found time to earn his law degree between musical projects, finding his niche as an entertainment lawyer.

Migliazza cites some impressive early musical mentors as well. Inspired at age 10 by the Jerry Lee Lewis biopic Great Balls of Fire, he proceeded to soak up piano tutelage from stalwarts that included Mr. B, Ann Rabson, and Henry Butler and attended blues workshops that gave him a firm footing in his chosen idiom. His latest solo album, Bumble Boogie, spotlights the New York-based Migliazza’s distinctive ivories prowess on a variety of revered boogie classics (as did his 2014 set Laying It Down).

Together, the Boogie Kings are unstoppable. Their upcoming duo CD Disturbing the Peace pays tribute to Jimmy Yancey, Meade Lux Lewis, Little Walter, the first Sonny Boy, and Huey “Piano” Smith—but their thrilling boogie piano exploits are anything but a museum piece. “We’re showing how contemporary it really is,” says Baldori. “We’re not trying to be preservationists. We’re trying to play this music in the same spirit of the guys who created it, but show why it works just as well now.”