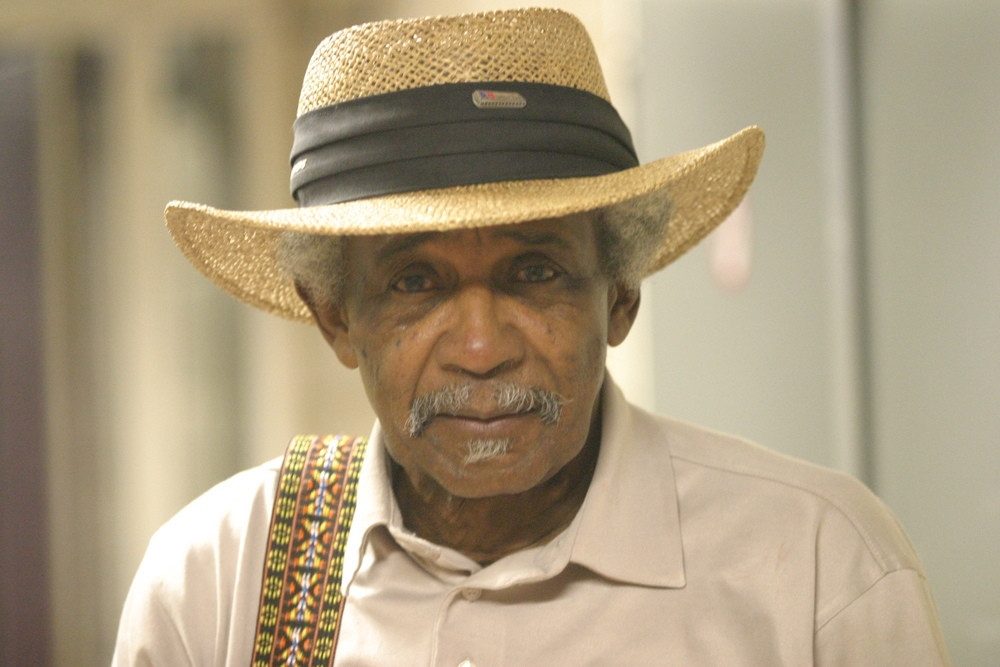 Singer, songwriter, and multi-instrumentalist Lazy Lester died at his home in Paradise, California at approximately 4:50 PM (PDT) on August 22nd. He was 85.

It saddens me to say, Lazy Lester passed just a short time ago peacefully at his home. He had a full life and will be remembered by so many. Memorial arrangements will follow. Condolences to his family.

According his friend Dawayne Gilley, Lester had been “battling stomach cancer for the past few months, had requested privacy during his illness and had hoped that he could recover.” Unsubstantiated rumors of his death circulated via social media last week.

In June of this year, GEICO Insurance featured Lester with their famous spokes-gecko.

Born Leslie Carswell Johnson on June 20th, 1933 in Torras, Louisiana, Lester has the rare distinction of being recognized as a living legend. As a boy, he worked as a gas station attendant, woodcutter and at a grocery store, where he purchased a harmonica and Little Walter’s famous record, “Juke.” One of his brothers had a guitar, which Lester also had learned to strum.

Providence shined its light on Lazy Lester in the form of a bus trip in the 1950s. He took a seat next to a stranger, and the two began chatting. The stranger turned out to be none other than celebrated swamp blues guitar player, Lightnin’ Slim on his way to record a session for Excello Records. Lester tagged along.

When they reached the studio, the scheduled harmonica player was nowhere to be found, so Lester volunteered his talents. Slim and producer Jay Miller agreed. From that moment Lester became a mainstay on Slim’s Excello recordings and his gigs. He’d follow Slim’s guitar licks with short, stabbing solos after Slim’s trademark prodding of, “Blow your harmonica, son.”

In 1957, Lester debuted as a lead artist for Excello, with his first hits coming a year later. “I’m a Lover Not a Fighter,” and “Sugar Coated Love” established him as a star. Lester remained a regular Excello artist for almost a decade, and functioned as a session musician for other artists on the label as well. All told, he played on sessions for Lightnin’ Slim, Slim Harpo, Katie Webster, Lonesome Sundown, Whispering Smith, Silas Hogan, Henry Gray, Tabby Thomas, Nathan Abshire, Johnny Jano and many, many others.

It wasn’t just harp that Lester would play. He also provided guitar, bass, drums and percussion for those legendary sessions. As a percussionist, he would play anything he could get his hands on. Rolled up newspapers, cardboard boxes, wood blocks, horse saddles, and even the studio walls became his instruments.

Outside the blues, Lester was also incredibly proficient, and had a great love for country music, swamp pop, rock n roll, and R&B. Through all of his influences and associations, Lester crafted a style as unique as his nickname. He called it “swamp blues,” a mixture of blues, swamp pop and classic country. Needless to say dozens of artists following in his footsteps successfully adopted that style

After a falling out with Miller, Lester left Excello in 1966, working odd jobs in Louisiana, Chicago, and Pontiac, Michigan where he moved to be with Slim Harpo’s sister. Other than a couple rare gigs, he retired from music in 1975.

By the late 1980s, he was performing regularly again. In 1987, he recorded Lazy Lester Rides Again for the Blue Horizon label in England. The record was released on Kingsnake in the U.S. and won a W.C. Handy Award for Best Contemporary Blues Album. In 1988, Alligator Records released Harp & Soul, further alerting the world that Lazy Lester was done resting.

Lester’s fans are world-wide. He was quick with a joke or 10, had no pretense of ego, and was always just one of the guys. He recorded for Antone’s, graced festival stages, and recorded with artists including Raful Neal, Kenny Neal, Snooky Pryor, Jimmie Vaughan, Sue Foley, Louisiana Red, and dozens more.

Our condolences go out to his family, as we drop the needle on some classic Lazy Lester today.