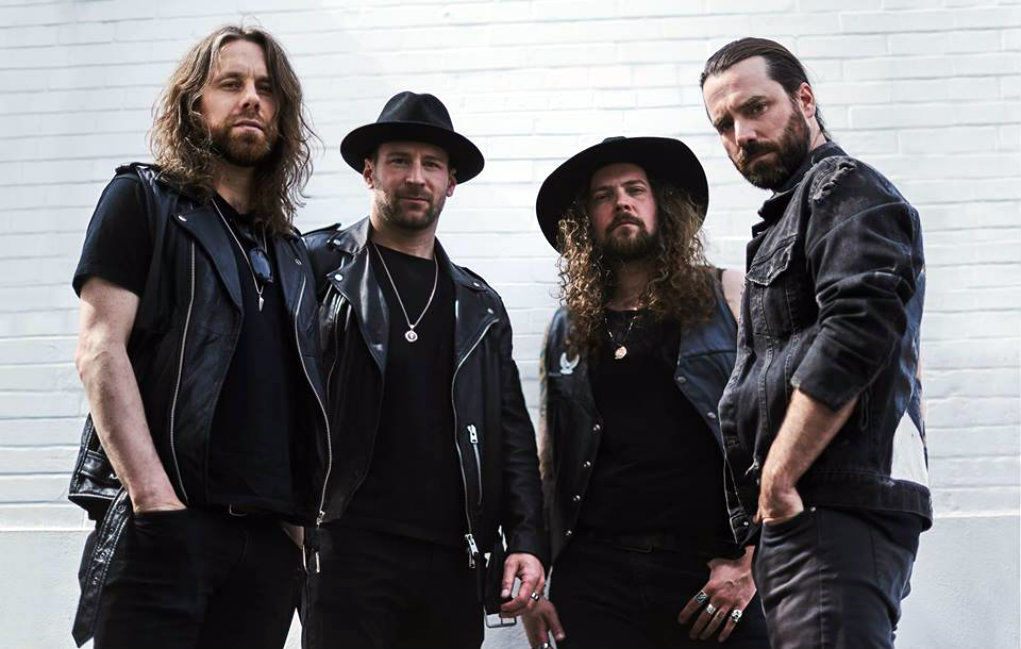 Monster Truck. The name invokes images of a loud, powerful machine rolling over anything in its path. An apt description of the Hamilton, Ontario band that bears the name. 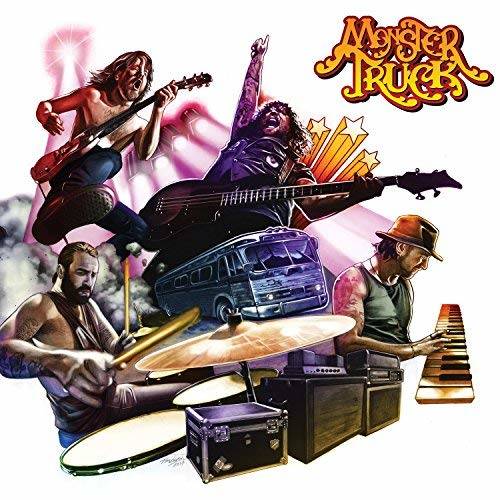 The foursome made up of lead singer/bassist Jon Harvey, guitarist Jeremy Widerman, keyboard player Brandon Bliss, and drummer Steve Kiley have been together for 9 years. They’ve paid their dues playing in small bars, opened for artists including Alice in Chains, Nickelback, and Black Stone Cherry, and owned main stage festival slots the world over.

Along the way, they’ve put out two EPs and two full-length records, and their newest album, True Rockers is scheduled for release on September 14th. Monster Truck won the Juno Award for Breakthrough Group of the Year in 2013, and their music has been attached to video games, the sci-fi series Orphan Black, and as a goal song for the Toronto Maple Leafs.

Monster Truck is barreling into their 10th year as a group, so we spoke to Jeremy Widerman about the band, their touring schedule, and why they’re more popular on another continent.

Sadly under-recognized in the United States, we shamefully had to admit that it was the first time we’d heard their music. “That doesn’t surprise me,” Widerman responded. “We’ve toured the US, not a lot, but we went out with Alice in Chains and Sevendust. We played Carolina Rebellion and a bunch of the other festivals that are tied to that branch of promoter. Primarily we’ve been focusing on the UK and Europe where we’re gaining a lot of traction.”

We wondered if that was a conscious business decision, or if European audiences, as they have traditionally been with American blues performers, are more receptive to their sound, or both. Jeremy pulled no punches. “That was the main reason we’ve kinda taken the foot off the gas in America,” he said. “We put a ton of work into America but didn’t see anything come out of it. Whereas we go to the UK and Europe and we see immediate forward progress. It’s kind of hard to bang our heads against the wall in America when we’ve been there over and over again. We even had a single break into the rock Top 40, then we go there and there’s just no reaction, and no fan base.”

Ever since the 1950s, and even earlier, American blues artists were finding huge fan bases in Europe, while American listeners barely knew their names. Apparently, at least in the case of Monster Truck, that trend continues. We asked Widerman, from his personal perspective, to postulate on the reasoning behind the phenomenon.

“A lot of people try to attribute it to the fractured nature of American radio,” he replied. “None of the stations seem to pride themselves on playing the same thing. You have these little pockets where bands get a little success. We had that in areas like New Jersey, Detroit, and St. Louis, where we get airplay. But that’s not enough to sustain an American tour.

“I don’t know if that’s necessarily the case,” he continued. “In Europe, they don’t have a lot of rock radio either. But, there are a lot of magazines. For example, in Germany there are magazines specifically dedicated to every genre of rock and metal. People read them. They subscribe to them. Then they come out to the live shows.

“Also in Europe, for every genre of music, you see a lot more people attending concerts and live performances. I don’t know what the reason for that is, and at the end of the day, I don’t care. I’m not trying to fix the problem. When we go to a new market, and return to that area and see no uptick, we’re losing money. So we focus on the areas where our music has traction, and where the audiences get bigger every time we appear.

“I’ll be the first to admit that maybe we haven’t put enough work into trying to make it in America. But it’s just so big, so spread out, and so fractured. It’s almost like 10 different countries. Our solution is to go where the fans are, and build on those bases tour after tour.”

But isn’t Canada similar in the aspect that it’s huge, sprawling, and yes, fractured even by language? Is it easier to be known in your country we wondered?

“Canadian radio is going much the same way as American radio,” Jeremy finished our thought. “Hard rock is just not on the radio. A lot of the stations that played our music, Rival Sons, and The Sheepdogs are switching formats, going more pop-rock and indie rock. That music is safe, and it gets the job done for their stations. Therefore, we’re starting to see a drop-off in Canada as well, with hard rock music in general. It’s never been more important to us then to turn our European and UK fanbases into something bigger.”

Taking a look at Monster Truck’s upcoming tour schedule, we did take note that the lion’s share of dates is in Europe and the UK. “We’re secondary support on the UK arena stops for Black Stone Cherry,” Widerman shared. “We’re primary support for all the mainland European dates. It’s going to be great to go up there and do all those club shows with them.

“While we’re on this topic, let me tell you something about Spain,” Jeremy continued. “Not only can we headline in Spain, but if you’re in a rock or heavy metal band, you can headline in Spain. The rock and metal scene knows when a live show is coming on any day of the week. The fans will research your band before you ever get there, and show up at the show. That’s something I only remember happening in Canada when I was a teenager.

“I’d find out a band was coming that I’d never seen before, would buy their record, learn the songs and go to the show and have a great time. That attitude still exists in Spain, and in Eastern Europe, but is now completely foreign in North America.”

We thought he was on to something here. I mean, who among us still reads about a band of whom we’ve never heard coming to town, and decides to just go to the show? For whatever reason, don’t we kind of sit back and wait for our heroes to come to town before we go out? Jeremy calls them out. “I think people say, ‘Yeah, I’ve heard of this band, but I think I’m just gonna stay in and watch Netflix tonight’. It’s harder to get them up off the couch. I’m not trying to demonize this behavior, but now, it seems, everything you ever wanted is just a button press away. That means we have to be something really special for someone to shell out forty, fifty, sixty dollars for a concert ticket. We take that as a challenge, and put it into our work ethic in recording new albums, and putting on a great live show.”

Turning the conversation back to the upcoming release of True Rockers, we had heard that it’s a more “fun-loving” album than some of their more serious releases. Although True Rockers covers topics including religion, drug addiction, and depression, Monster Truck wants their fans to have “as much fun as possible” while listening.

“That’s what we set out to do in the beginning,” says Widerman. “There was a lot of that whimsy, fun, and excitement on our very first full-length record, Furiosity. It’s something that we think we may have missed the mark on a little bit with Sittin’ Heavy in 2015. So that’s something we wanted to re-inject into this new project. I think we succeeded in that, although we seemed to get bogged down a little bit by the end of the process. With the decision to add another recording session and a couple more songs to the album, we didn’t have the time to have a much of a blast with it as we wanted. But we felt really strongly about these songs and decided to include them. But that’s reflective of our constant struggle to be satisfied with an album before it goes out.”

We did take a listen to True Rockers, and much as we expected the album is really good. It starts out fast and furious with the title track which features Dee Snider, shows some symphonic influence on tracks like “Thundertruck,” and sure enough, some heavy, rockin’ blues on “Undone,” and “Devil Don’t Care.”

“Our song ‘Devil Don’t Care,’ we added some blues harp into that tune,” says Widerman. “To me it’s a ZZ Top kind of sound. They, of course, were influenced by Robert Johnson, Muddy, and everything from the 50s and 60s blues scene. When they came out, they were modernizing it. It was hybrid blues, rock ‘n roll. We’re trying to do some of that, but we’re also mixing in grunge, and even some punk and metal, ya know?

“At the end of the day, I think a lot of bands are just finding these hybrid genres, mixing six different things together. It’s something we didn’t do as much of on the new record, as we’ve done in the past. Our older records had a lot more of that blues-rock influence. It’s something that I miss on this new record a little bit, and something I think I’d like to go back to a little more on the next one. Those end up being my favorite songs to play live and hear back on the album a year or two later. ‘Devil Don’t Care’ is definitely one of my favorites on the new record and the most blues-influenced song on the album.”

True Rockers hits the streets on September 14th via Dine Alone Records. Monster Truck recently headlined Grizzfest in British Columbia, and are scheduled to appear at the New Music Fest in Sudbury, Ontario the day after the album drops. Then it’s off to Europe in November. Rock fans in the good ‘ol USA can catch them on the Trailer Park Boys Cruise from Tampa, Florida to Great Stirrup Cay, Bahamas in March, 2019.