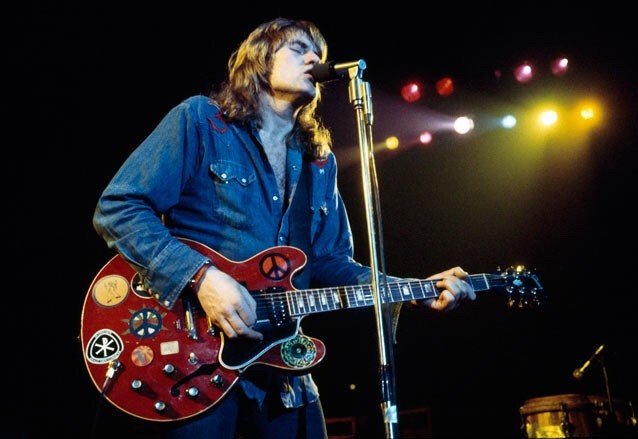 The art of the luthier reaches its zenith with this beautifully constructed custom guitar from the master craftsmen at Gibson whose passion, perfection and precision are evident in their prized instrument. To make an identical replica of what a 60-year-old ES-335 looked like at Woodstock in 1969 is an achievement of pure genius. The aging cherry wood adds to the distressed appearance, the scratches are consistent with years of hard playing and the guitar is authentic in every detail including the famous sticker motifs. Gibson has made 50 limited edition signature replicas of this fabled ’69 Festival’ axe. The famous Nashville guitar company had previously nominated Lee as the greatest musician ever to play that particular model, deservedly ahead of Chuck Berry and BB King. This commemorative Big Red guitar is an important legacy considering the outpourings of grief and universal respect for the legendary musician who passed away in 2013 at the peak of his creativity. 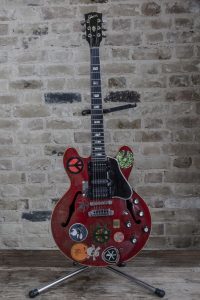 In the mid to late 1960s Alvin Lee, as vocalist and guitarist in the UK provincial band Ten Years After, was already gaining the moniker of “Captain Speed Fingers.” While his talents and reputation had not made much impact across the pond all that would change on the final evening of the 1969 Woodstock Festival in New York. Ten Years After were at the forefront of the British blues-rock explosion, and they closed their phenomenal set with the titanic rock and roll epic “I’m Going Home.” At the center of the maelstrom was this guitar virtuoso Alvin Lee whose spellbinding fretwork of unprecedented velocity mesmerized the 500,000 festival crowd. Woodstock and the subsequent soundtrack and film recordings focusing on Lee’s scintillating solo accelerated his status to that of icon. He would become a worthy member of the pantheon of guitar gods, among Clapton, Hendrix and Gallagher. It is now 50 years since the festival which captured the spirit and sound of the hippie era and changed the world, so it is perfect timing for “the guitar that ate Woodstock” and its owner to be celebrated by Gibson. 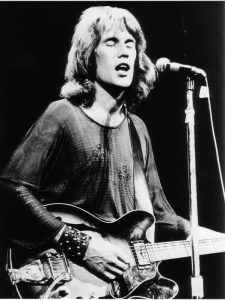 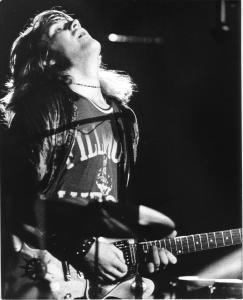 Loraine Burgon was Alvin’s girlfriend at the time of his Woodstock experience and she remembers vividly what it meant to him and Big Red in this unique account:

Alvin’s pent-up energy from waiting so many hours to start playing after the storm resulted in an intense and extraordinary set from the word go. Initially there were some technical issues with the tuning because of all the atmospheric damp. This only served to increase the band’s energy, drive and bite. Alvin sang from the depth of his being and played like a force of nature; watching him as I had for many years, he seemed further transformed at Woodstock. Big Red was a part of his body over which he had complete mastery, moving from slow, drawn-out feedback to mind-blowing speed and dexterity. Sometimes head-to-head with Leo’s pounding bass, the two of them caught up together in pushing the music as far as they could. Tracks such as “I Can’t Keep from Crying,” written by Al Kooper, had developed over the previous three years from five to twenty minutes. Alvin’s solo travelled from fast, tight complex patterns to a climax that included de-tuning and gradually re-tuning the low E string in rhythmical steps to the highest end of the top E string. Shredding, bending the strings, working with his hands and Big Red, through the Marshall set-up produced sonic extremes. Alvin never used foot pedals, or effects boxes on stage, Big Red went straight into his Marshall amp and the rest was technique. Their closing track “I’m Going Home” was a song Alvin had written for me some years earlier in Scandinavia, when there was no money for me to travel with him. It’s the track that was featured in the Woodstock film documentary, and a chance for me to dance and sweat out any remaining energy. In the middle of it there is a medley of rock and roll classics that took Alvin and bass player Leo right back to their teens in The Jaybirds in Nottingham. One final intense, sweaty workout triumphantly ended a completely magical set. The audience had danced, screamed, shouted and sung along. Woodstock was not the only festival they played that summer, but it was the biggest stoned, hip audience, the most extreme, extraordinary event. There were no logos on tee shirts at Woodstock and the message everywhere, painted on signs, flags and faces was Peace and Love.

Alvin once declared his famous Gibson ES-335 to be “the best investment I ever made: I bought it for £45 in Nottingham and it even had a fitted case.” Although the guitar has been referred to as a 1958 or 1959 model, it’s impossible to know the year of its make. The neck was replaced in the early 1970s after Lee broke the original at the Marquee in London, England, after accidentally ramming it into the club’s low ceiling. Perhaps the guitar’s most distinguishing features are the stickers on its body, some of which have been in place since Woodstock. “They just got thrown on, actually,” Lee explained. “But when I broke the neck at the Marquee, I sent it back to Gibson for repair, and when it was returned they had lacquered over all the stickers so they couldn’t come off.” Alvin treated Big Red with respect, changing strings before each performance and maintaining it to a meticulous standard.

It does not end there, however, as the next stage in this remarkable history of Big Red has yet to be determined. It has been kept in a vault for many years since Alvin was offered half a million pounds for it. His family has recently decided to sell the guitar on which Lee’s nimble fingers had weaved his magic and it is being sold by www.rockstarsguitars.com. Its place in rock and blues history is unique as Lee’s undisputed favorite main guitar on stage and in the recording studio. Having defined a generation and stolen the show at the biggest festival in the world, Big Red is heading to a new home.  Given that the Woodstock guitar played by Jimi Hendrix fetched $2 million at auction, what is the value of this original Gibson E-335 modified and customized by Alvin over four decades? The answer to that question is eagerly awaited.

For readers interested in the technical specifications, the Festival model features a three-ply maple/poplar/maple body with an aged sixties cherry finish, a solid mahogany neck with an authentic medium C-Shape profile and an Indian rosewood fret board with a hide glue fit. Pickups-wise, it has uncovered Alnico III Custombuckers in the neck and bridge, plus a Seymour Duncan SSL-1 in the middle position. Elsewhere, there’s a No-Wire ABR-1 bridge, Bigsby B-7 tailpiece and Kluson Single Line, Single Ring Tulip tuners. 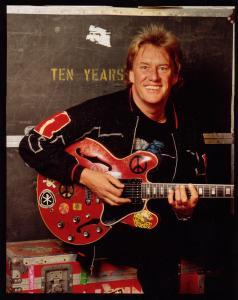