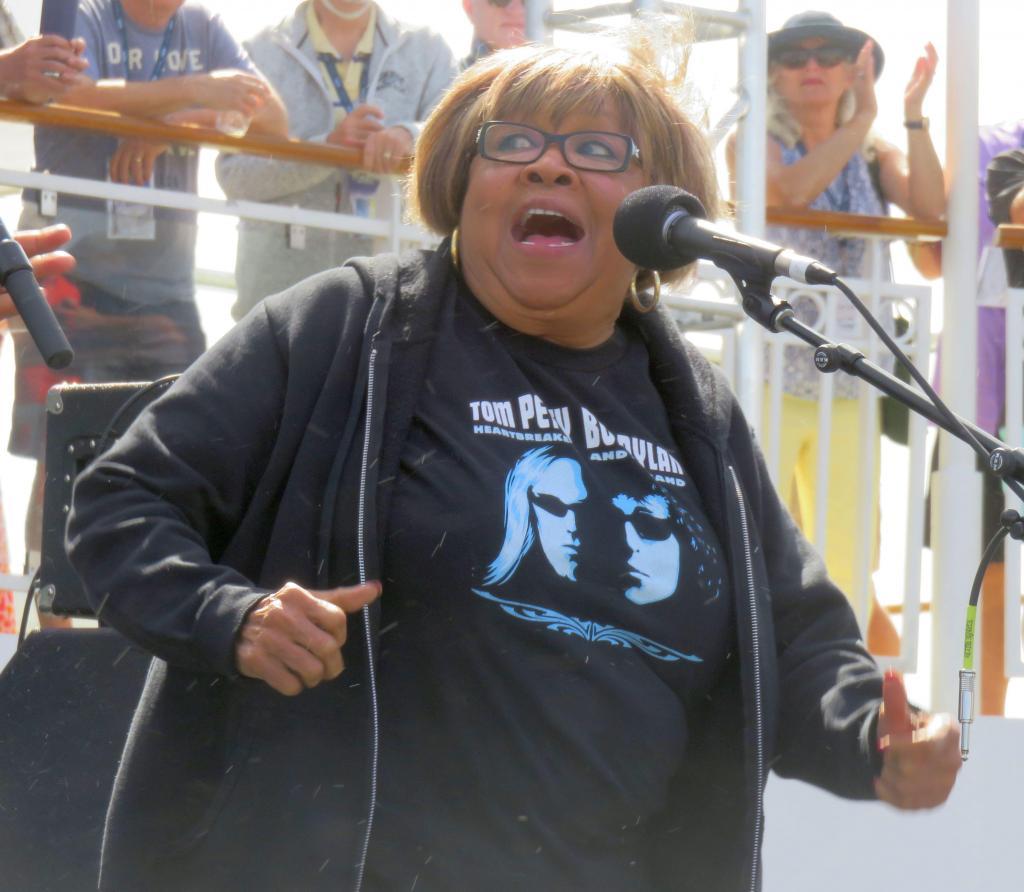 It’s unlikely that singer/songwriter Steve Poltz will ever be in the doghouse for forgetting his wedding anniversary. You don’t tend to forget things that happen on a cruise ship with a couple thousand friends wishing you well. Poltz got married aboard the Norwegian Cruise Line ship Pearl, at sea somewhere near the Bahamas during the 2020 sailing of the Cayamo Cruise.

Poltz wasn’t the only one making precious memories during Cayamo, which took place Feb. 3-10. With a star-studded lineup that included Brian Wilson, Jeff Tweedy, Mavis Staples, Lake Street Dive and dozens of Americana artists, fans were thrilled with shows that ran virtually non-stop every day of the cruise. It all got started with a high energy set from Staples who played the ‘sail away’ show as the Pearl pulled out of Miami. With the city’s skyline illuminated in the background, Staples began her set with the Staples Singers classic “If You’re Ready (Come Go with Me)” before moving into “Who Told You That” and the rather surprising choice of cover songs, the Talking Heads cut “Slippery People.” In the mood to share the spotlight, Staples called Tweedy onto the stage for a duet on “Brothers and Sisters” and followed that treat up by bringing Lake Street Dive on for an extra-soulful version of “Build a Bridge.” A take on the Buffalo Springfield hit “For What It’s Worth” and the gospel chestnut “Wade in the Water” were also performed.

It was special enough to have a chance to see acts like Anderson East, Soggy Bottom Boys, the Quebe Sisters, Deer Tick, Raul Malo, Buddy Miller and Ashley Monroe perform their sets, but every day Cayamo was also stacked with unique happenings. Besides playing two shows packed with Beach Boys hits, Brian Wilson and his fellow former Beach Boys Al Jardine and Blondie Chaplin participated in a Q&A session where they answered queries submitted by fans.

Rodney Crowell and Allison Moorer hosted an “Art of Memoir” session where they discussed their difficult upbringings and their respective memoirs, performing a couple of songs relevant to the books along the way. In a separate show, Moorer reunited with the Mastersons, long-time members of her band that she had not performed with in years. And of course with Mavis Staples on board, there was a gospel show. Joining Mavis for the Sunday morning event were Dan Tyminski, the Wailin’ Jennys, the Quebe Sisters, Emily Scott Robinson and others. To top off the gospel show, singer Saundra Williams, of the Mavis Staples band, sung a song that she had written on the ship earlier in the day. And for enthusiastic early risers, Jim Lauderdale led numerous tai chi sessions.

The 2020 sailing of Cayamo was the 13th incarnation of the festival, and amazingly Shawn Mullins has appeared on them all. Crowell, Lauderdale and Buddy Miller were also returning favorites with multiple sailings under their belts, but this year Cayamo also featured a large contingent of players enjoying their maiden voyages. Some of the first-timers were Madison Cunningham, Ike Reilly, Grayson Capps, Della Mae and Them Coulee Boys. Them Coulee Boys, a rocking bluegrass outfit from Wisconsin, and Della Mae, an all-female roots and bluegrass band out of Nashville, won their spots on the cruise by getting the most votes (along with Emily Scott Robinson) in Cayamo’s Soundcheck competition. Reilly and Capps
showed their talent for storytelling during their shows, not only with their music but with funny anecdotes in between songs. Cunningham, a 22-year-old from Los Angeles, was one of the most talked about of the first-time Cayamoans. Performing with just a bass player and drummer, or sometimes alone with her electric guitar, Cunningham floored the crowd with a selection of her self-penned songs like the dreamy “Dry as Sand,” “Like You Do,” “No One Else to Blame” and an homage to her home town, “L.A.” Cunningham often recalls Joni Mitchell, both with her voice and phrasing and her intelligent lyrics.

Cayamo’s motto is “A Journey Through Song,” and the slogan is quite fitting. The only time the musical fun slows down a bit is on the days that the ship pulls into port; on those days shows are only scheduled in the evening so that cruisers can spend the day ashore and not miss anything. The Pearl called at two Caribbean ports this time out; Antigua and St. Croix in the U.S. Virgin Islands. Many cruisers headed straight to the beach or shopping while others indulged in a variety of shore excursions; not surprisingly a visit to the Captain Morgan rum distillery in St. Croix was a popular adventure.

Having been constructed especially for music cruises, the Pearl is the preferred ship for Cayamo. And while the Pearl accommodates live music in more than half a dozen venues, the ship also has all the amenities you’d expect from a cruise liner; pool and hot tubs, spa, casino, arcade, shopping and lots of places to eat and drink. Cayamo events took place seemingly in every nook and cranny as artist signings and merch sales, meet and greets, moonshine tasting, jam sessions and more kept Cayamoans busy.

Next year Cayamo takes place Feb. 20-27, 2021 aboard the Pearl as she sails from Miami to St. Thomas in the U.S. Virgin Islands and St. Kitts. And if you see Mr. and Mrs. Steve Poltz aboard, don’t forget to wish them a happy anniversary.

Information and pre-sale tickets for Cayamo 2021

*All photos Kevin Wierzbicki except where noted