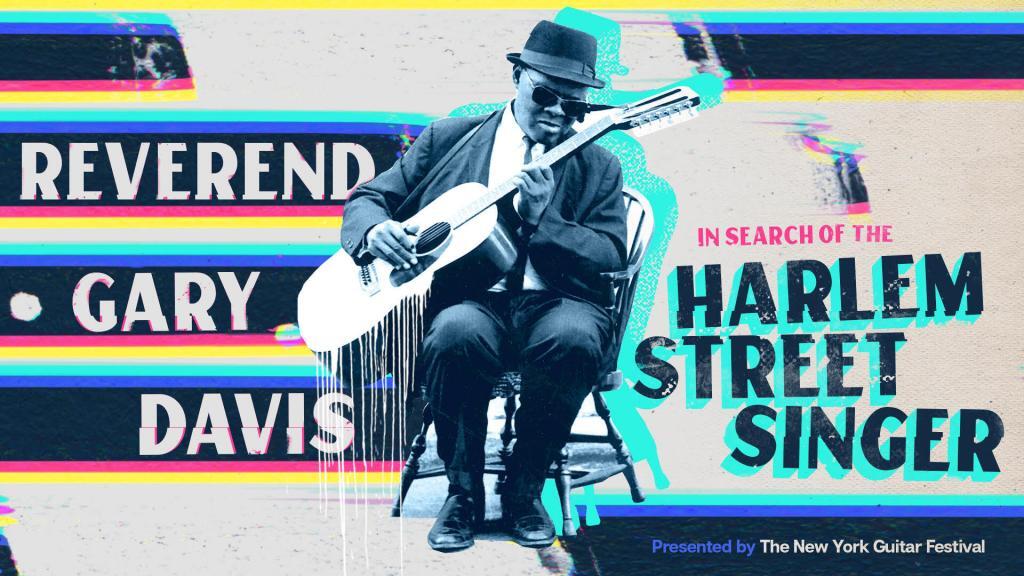 Reverend Gary Davis: In Search of the Harlem Street Singer will premier one video performance each day (May 4-15) at 4pm EDT via the New York Guitar Festival YouTube Channel. Full programming schedule listed below.

In partnership with the New York Guitar Festival, WNYC’s “New Sounds” will debut audio recordings of the full collection on May 4. Tune in at 11pm EDT on May 4th – on the radio dial at 93.9FM or at their website.

Rev. Gary Davis performed on the streets of Harlem from the late 1940s until his death in 1972. WNYC’s John Schaefer explains, “Rev. Gary Davis is one of those curious figures in music history who should be famous, but who’s also a lot better known than you might think.”  Overcoming poverty, racial discrimination and blindness, Davis made numerous influential recordings and festival appearances, and also taught students including David Bromberg, Stefan Grossman, Dave Van Ronk, and Bob Weir. His songs have been covered by The Rolling Stones, The Grateful Dead, Peter Paul & Mary, and Bob Dylan.

New York Guitar Festival’s Artistic Director David Spelman adds of the project, “Listening to, and sharing, music has been a lifeline for so many people during this period of social isolation. We hope this project will spread the joy, and shine a light on the remarkable music and resilient life of Reverend Gary Davis.”

Access to Reverend Gary Davis: In Search of the Harlem Street Singer  is free. The New York Guitar Festival and performing artists are asking viewers to make donations to MusiCares. The Recording Academy’s MusicCares COVID-19 Relief Fund, helps the music community affected by the Coronavirus pandemic.

When seeing Rev. Gary Davis audiences generally had no idea that some of the biggest acts in music were borrowing from a blind Carolina blues guitarist who left a life of poverty and rough treatment to move to New York City in the late 40s.

Davis himself recorded as Blind Gary Davis and Rev. Gary Davis – he was ordained as a minister in the 1930s – and the two names seem to reflect the two halves of his personality. Religious imagery fills his songs, and his version of the blues is heavily colored by the sounds of early gospel music. But his guitar picking had a strong ragtime feel, and Mr. Davis was known to be, shall we say, a very secular guy when Mrs. Davis wasn’t around. We know this because for most of the 60s and until his death in 1972, his Harlem apartment became a pilgrimage site for dozens of young guitarists eager to learn from someone who had lived the blues and played them from birth. David Bromberg, Stefan Grossman, Dave Van Ronk, and Bob Weir are just some of the many students who left his apartment with new skills and often colorful, and occasionally off-color, stories.

Davis spent much of his early years in New York playing on the streets of Harlem. In 1960, he recorded an album for the prestigious (and Prestige Records-owned) Bluesville label; it was called Harlem Street Singer. But the 60s revival of interest in the blues and folk music was a rising tide that lifted many boats, his among them. Students came; he was invited to appear at the Newport Folk Festival; and a series of other LPs followed. These included reissues of his earliest recordings, and it’s fascinating to follow his raspy voice and sometimes showy guitar playing over the course of many years. Like any good street musician, Gary Davis could change a song to fit the situation.  Part of the fun of being a fan of his is comparing (and arguing over) the various versions he made of songs like “Samson and Delilah” (which he also recorded under the name “If I Had My Way”) or “Twelve Gates to the City.”  And part of the fun of being a guitarist trying play his music is figuring out how he did what he did.  (In one version of “Samson and Delilah,” he uses his right hand to rap on the body of the guitar as a percussion effect while the left hand hammers on the strings to keep them sounding – an early example of the so-called “tapping” technique.)

All of the musicians taking part in this year’s New York Guitar Festival are now fans of Rev. Gary Davis.  Some have been lifelong fans; others we’ve had the pleasure of introducing him to.  They’ve all found their way into one of the good reverend’s songs – reinventing them just as he did, throughout a long and productive career.

Bill Frisell – Bill Frisell is the founder of Guitarists Without Borders. Actually that’s a lie, but it shouldn’t be. Frisell is a singular figure in music, drawing on jazz, rock, classical, folk, electronic, West African, and film music. He is both a composer and an inventive arranger, and has also had works written for him by leading classical composers. He has played with… oh hell, everyone.

Sonia de los Santos – Sonia de los Santos is a Mexican-born, New York-based singer and guitarist who played in the Grammy-winning band Dan Zanes and Friends. She has made two albums of family music and been nominated for a Latin Grammy.

Jorma Kaukonen – Jorma Kaukonen helped shape the sound of 60s rock with the band Jefferson Airplane. Since then, he has made sure that American roots music remains a part of that sound with his solo work and his band Hot Tuna. But he has a particular soft spot for Rev. Gary Davis: “his art set me on fire as a young man,” he writes, “in ways that it would take me decades to fully appreciate.”

Amythyst Kiah – Amythyst Kiah is a powerhouse singer, banjo player, and guitarist who draws freely from folk, blues, old-time, and alternative rock. She is one of the four women in the banjo-based, socially-conscious supergroup Our Native Daughters.

Kaia Kater – Kaia Kater is a Canadian musician whose family roots are in the Caribbean but whose musical roots are in Appalachia. As a singer, songwriter, banjo player and guitarist, she has made three LPs that range from covers of traditional tunes to contemporary chamber-folk songs about social issues.

Brandon Ross – Brandon Ross is a singer, songwriter, and guitarist. His own bands include the avant-power trio Harriet Tubman and the improvising duo For Living Lovers. He has played with Cassandra Wilson, Henry Threadgill, and dozens of others, and blames us, the New York Guitar Festival, for his love of Rev. Gary Davis after he was asked to take part in a 2004 tribute concert we’d done. “My search resulted in touching into a vein of gold,” he writes, “bright as anything else resonating the musical cosmos we inhabit.”

Larry Campbell & Teresa Williams – The husband and wife American roots music team of Larry Campbell and Teresa Williams made their first album together in 2015, after seven years of playing in Levon Helm’s band. They’ve also played together with Jorma Kaukonen, Phil Lesh, and many others.  Larry was also a member of Bob Dylan’s “Never Ending Tour” band for many years. He recently recovered from the COVID-19 virus.

Larkin Poe – Larkin Poe is a duo comprised of the guitar-slinging sisters Rebecca & Megan Lovell, who play everything from amped-up electric blues-rock to covers of Delta and gutbucket blues. They are currently hosting a Saturday series of online concerts. Fun fact: Larkin Poe is the name of one of their ancestors. Another was Edgar Allen Poe.

Fantastic Negrito – Fantastic Negrito is the name used by Grammy-winning singer, songwriter and guitarist Xavier Dphrepaulezz. More than a stage name, it is a mark of recovery and reinvention for an artist whose long and wild background includes music industry misfortune, a near-fatal car crash, and a renewed commitment to a street-based, community-minded approach to music.

Dom Flemons – Dom Flemons refers to himself as an “American songster,” and for good reason. The Grammy-winning banjo, guitar, bones, fife, and harmonica player – and former member of the Carolina Chocolate Drops – has a winning on-stage personality and a repertoire of over a century of American vernacular songs: old-time, ragtime, early jazz, minstrel songs, string band music and more.