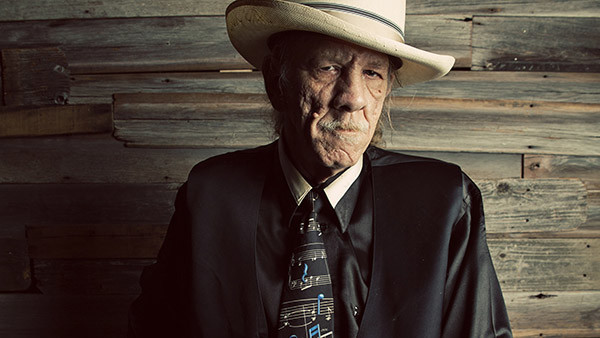 Born in Boston as William Homans III to a blueblood family, Watermelon Slim was destined to be a blues man. The 70-year-old singer, songwriter, multi-instrumentalist has 14 albums to his credit, dating back to 1973’s Merry Airbrakes. He’s received over 20 Blues Music Award nominations (including 2 this year for Album of the Year and Traditional Blues Album for Church of the Blues). He’s also had previous wins for Album of the Year and Band of the Year. Now he comes to us the way we love to hear him, LIVE, at 2 different clubs in Oklahoma (his home since the late 70s) with Traveling Man. 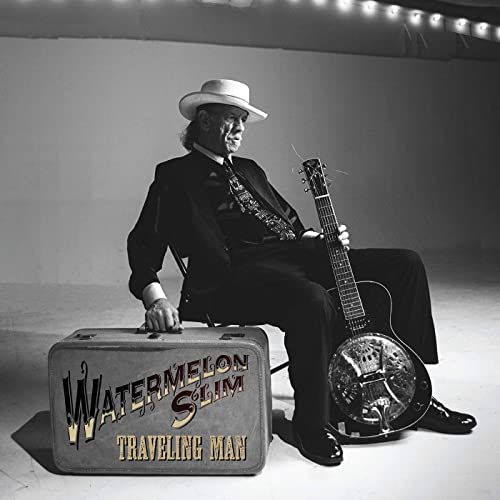 Slim got his first dose of the blues at age 5 when the family maid would sing him John Lee Hooker songs at their home in Asheville, North Carolina and has held a myriad of jobs that helped development his blues man lifestyle. He is a vehemently anti-war Vietnam veteran and has held jobs as a forklift driver, funeral officiator, watermelon farmer, small-time criminal, newspaper reporter, saw miller, and truck driver. Dissimilarly, Slim also holds two college degrees.

But it’s the stripped-down, classic blues with slide guitar and harmonica, that has made him an icon in the blues music world. Traveling Man puts us front-row center to his live performances with just him, his guitar and harmonica — the way his Delta influence Mississippi John Hurt would want it.

In fact, he performs spot-on covers of Hurt’s “61 Highway Blues,” and “Frisco Line” on Disc 1, recorded live at The Blue Door in Oklahoma City. His other cover songs on this disc include Cat Iron’s “Jimmy Bell” and a requested performance of Howlin’ Wolf’s “Smokestack Lightnin’,” which Slim flawlessly segues into Muddy Waters’ “Two Trains Running” for a nearly 12-minute performance.

Slim’s originals on this disc lean toward music he wrote in his truck-driving days. Kicking off with “Blues Freightliner,” he goes into “Truck Driving Songs Never Go Out of Style,” “Scalemaster Blues,” and the self-exploring “300 Miles.” There’s an ode to his label, “Northern Blues,” and the amazing “Last Blues,” but our personal favorite track is the closer, “Holler #4.”

Disc number 2 was recorded live at The Depot in Norman, Oklahoma. All the songs on this disc were written or co-written by Slim, with the exception of the traditional “John Henry.” It is on this disc, with these songs, that Homans hits high gear. It all begins with the funky “Let it Be in Memphis.” Slim’s raw vocals go from a Delta cry to Johnny Cash-esque bass at the drop of a dime.

With nary a trucker song, Slim goes from the Western flavored “Into the Sunset,” to the swanky “Archetypal Blues,” sandwiching the foot-stomping “John Henry” in between. The mournful “Oklahoma Blues” goes into a story about the Crossroads in Mississippi and his co-written “Devil’s Cadillac.” Truly Delta blues at some of its finest from an Oklahoma performer.

The closer on Disc 2 is the 6-minute “Dark Genius.” An interestingly inky political song, the lyrics have John F Kennedy, Anwar Sadat, and Slim himself all drinking from the same dark genius trough.

“This double CD is a snapshot of the real me, straight no chaser,” Slim says. “I hope y’all enjoy it as much as (co-producer) Chris Hardwick and I enjoyed making it.”

A master storyteller, Watermelon Slim enhances his performance with yarns of the past and tales of his own life. If ever there were a modern album that appeases the gods of blues purists, Traveling Man is it.