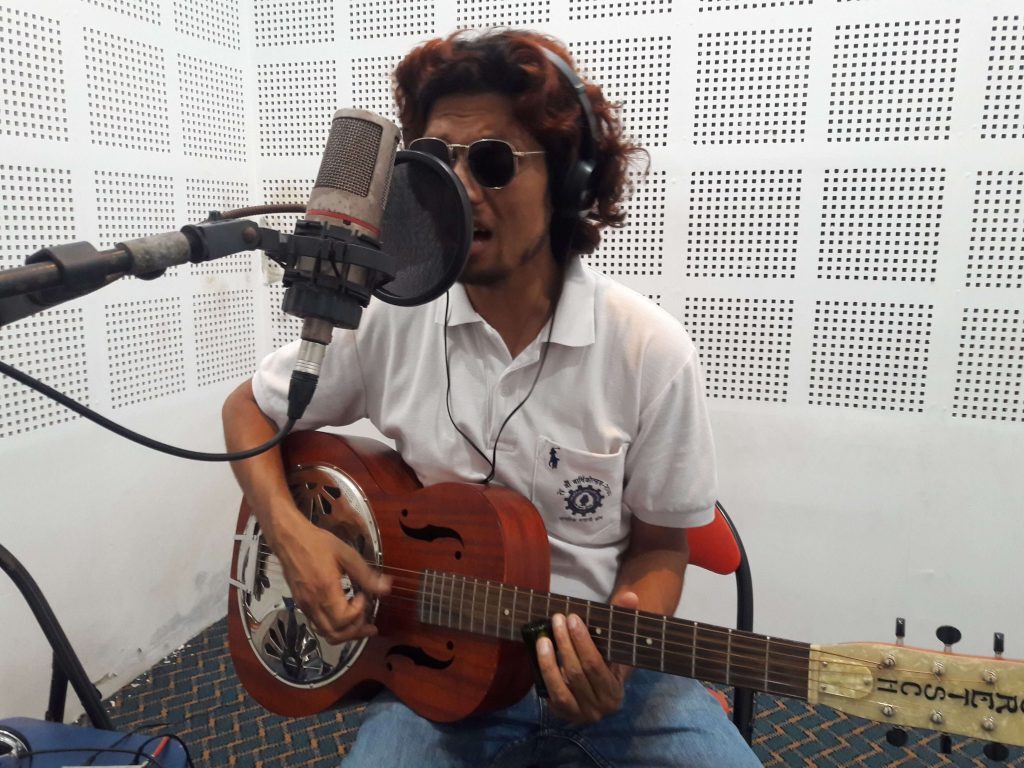 Prakash “Slim” Pokharel (born Ram Prakash Pokharel) is a country blues musician, educator, and blues history researcher. He was born June 17th, 1980, in a field within the small village of Lamatar in the Lalitpur district of Nepal. The village saw its first electric bulb in 1983 and its first motor car in 1995. He was raised by a loving loyal family with very limited means. His father passed away at age twenty nine leaving his mother with three children to raise. His mother worked in their neighbors’ fields to provide for the family. 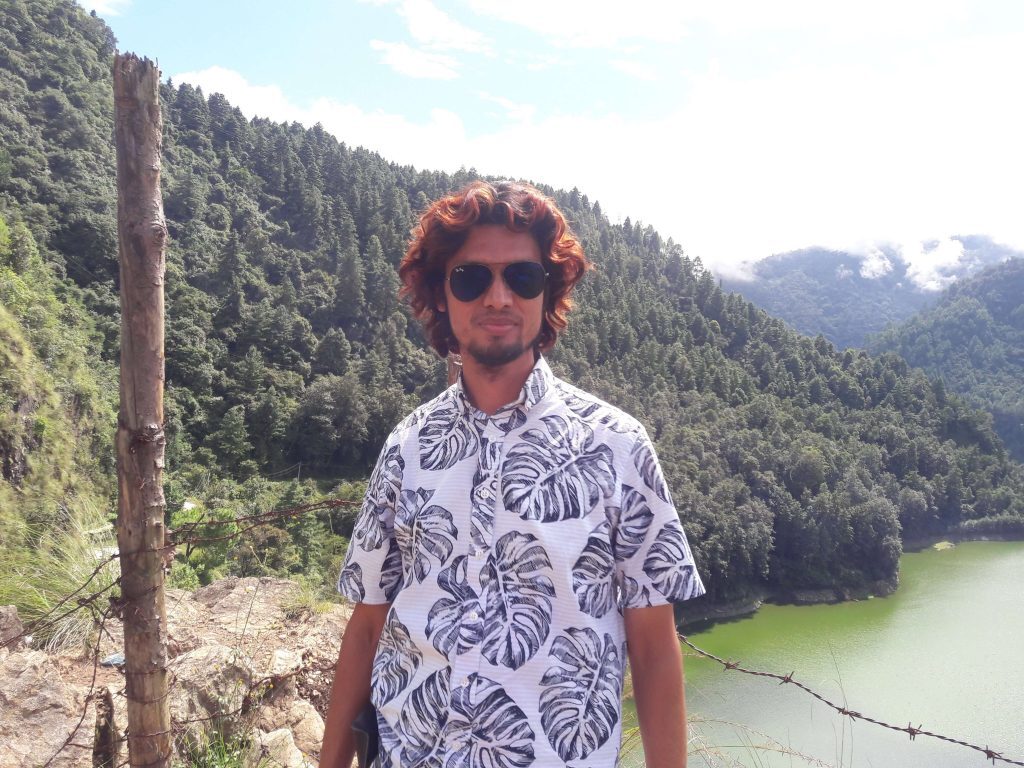 As a child Prakash was interested in music. He sang and played music by drumming on a water gallon. Legendary musician C.B. Chhetri taught Prakash who later joined Chhetri’s band. He gigged the restaurant circuit playing rock and instrumental music. Around the same time, he started teaching music in schools and institutions. In 2008, he participated in “Teaching Music Effectively” conducted at the Kathmandu Jazz Conservatory by the U.S. Cultural Embassy envoy Dr. Gene Aitken. From 2003 to 2015 he played guitar, bass, and sang with many bands throughout Nepal.

In August 2019, he was mentioned in Living Blues Magazine. Yuwa Hunkar, a Nepali magazine, published his autobiography. Prakash stated that blues is a healing music for people who’ve experienced pain in life. His quote, “B.B. King globalized the blues,” is mentioned in Diane Williams’ The Life and Legacy of B.B. King at the Mississippi Department of Archives and History.

Legendary blues artist Rory Block watched his interview on Blues Radio International and congratulated Prakash for his wonderful slide playing and international feel. Prakash believes he will one day play the blues with a national guitar in Mississippi. He considers the land sacred and calls it Blues Mecca. You can hear his country blues covers, originals, and “Blues in the schools” video clips on his Facebook page and Youtube channel (links below).

How and why did you get into blues?

Since I was a child, I’ve been interested in music. I played music by drumming against a water gallon. I would sing songs all day and I sang what I heard on the radio. Music drew me in. Back then, my most prized possession was a bicycle that my sister gifted me after she landed a job. I wanted to learn how to play the guitar but I didn’t have the money to buy one. My mother raised three children with wages earned working for our neighbors after my father died when I was only two years old. I must confess that I bought my first guitar by selling my bicycle. I told my family that a friend was borrowing it.

For two years I searched for a mentor who could teach me music theory. I finally found a teacher; legendary musician C.B. Chhetri. Although he lived 10 kilometers away from my home, my passion for music was so enormous that I never missed a lesson. Whether it stormed or rained I always arrived ahead of time and I was ready to learn. After years of learning the guitar, my mentor asked me to join his band. I played in an instrumental rock band and gigged the restaurant circuit playing rock and instrumental music.

It was fine playing in rock bands all those years, however I had a thirst for deeper musical knowledge and experience. The aching hole in my soul healed when I first heard B.B. King. Overwhelmed by what I heard, I began researching blues music and its history. I took my existing repertoire and started experimenting by adding blues licks and grooves to them. I gradually learned expanded theory and how chords and progressions are formed both physically and numerically. From 2003 to 2015 I stayed busy playing lead and/or rhythm guitar and bass guitar. Also, I was a vocalist for various bands throughout Nepal. In 2017, I started the Blues Mentorship Training Program from the Mount Zion Memorial Fund aka MZMF. In 2019, after completing the blues research and mentorship training, I became an International Artist/Performer and Educator of the Blues from MZMF. There’s a vast difference in my playing versus the blues education I received. Blues comes from Black American societies. Blues isn’t just a genre as I feel the blues understands the pain that dwells in our hearts. Without knowing the history, blues would be incomplete. My tragic childhood, economic depression, and passion for blues history makes me a bluesman.

Can you talk about teaching music in Nepal?

Since the beginning of my musical career, I’ve been teaching music in schools and institutions. It’s very hard to survive as a music teacher in Nepal. It’s very difficult to convince people how important music education is for all ages and walks of life. Music schools and institutions are centered in the capital and major cities in Nepal. I’ve been giving free music lessons for those who are not capable of paying the fees but are talented and passionate. Still, people do not allow their children to learn and play music because they think that music is a hobby and not a profession with a secure future. 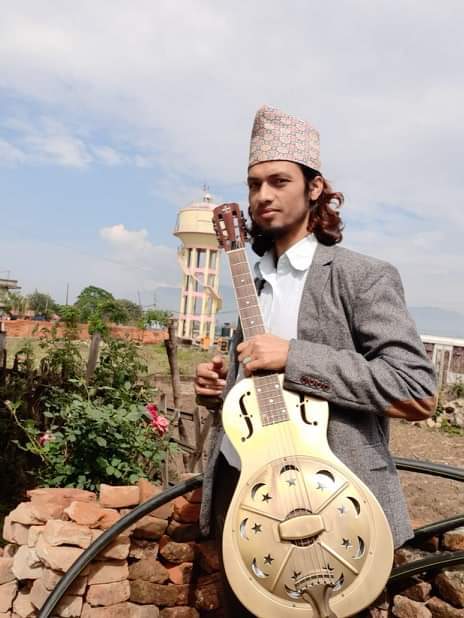 Do you see any similarities between blues and Nepali music?

Well, there are differences in blues and Nepali music but there are many similarities: Economic depression, discrimination, and social issues remain the same.

Who were your blues music influences ?

I listen to Jimi Hendrix and Eric Clapton. For over 12 years I’ve played in rock bands and I’ve tried to give the songs I play an urban blues feel. When I first heard B.B. King’s recordings I became thirsty to learn the magical intervals: sixths, ninths, major thirds, and minor thirds. I wanted to learn his bee sting vibrato techniques. When I heard Charley Patton, Robert Johnson, Bukka White, Son House, Mississippi John Hurt, Blind Blake, Mississippi Fred McDowell, and many other country blues legends, I knew this would be my main style as I felt it in my heart.

Can you talk about your blues style and songwriting style?

Country and Delta blues legends such as Charley Patton, Robert Johnson, Bukka White, Son House, Mississippi John Hurt, Blind Blake, and Fred McDowell drew me into the country and delta blues style. I also like to mix Nepali flavor with the country blues sound. My original numbers such as “Villager’s Blues,” “Home Alone Blues,” and “Corona Virus Blues” are mixed with Nepali flavor and Delta blues. The lyrical content in pre-war blues was very lively and practical. Blues is characterized by its lyrics so I like to write about social issues, economic depression, floods and droughts, and the disasters we all face. In my first song “Villager’s Blues” I tried to mention problems villagers face in Nepal. In my other original song called “Home Alone Blues” I tried to mix Eastern flavor with country blues. “Corona Virus Blues” is all about the deadly corona virus and the problems we are all facing during this strange and difficult time. I am working on another new number and it also has the same lyrical purity.

Are there clubs to play music in Nepal? Do you play live?

If this question is for musicians encompassing all genres then of course we have many pubs, restaurants, and hotels to play. Within my scenario, there is not much of a platform for a country bluesman. My motto is to establish country blues in Nepal. Fans of country and Delta blues are increasing by the day and people are taking an interest in promoting the style. I hope to soon have a platform.

What do you want to accomplish with your music?

I believe music is a beautiful gift and we can’t live without this sacred gift. It’s the medicine for all diseases. When I hear and play music my soul starts singing. It’s in my heart. I’ve been playing and teaching since I was young and I really want to empower and educate people through music. I wish all the children on our planet an opportunity to learn music.

*All photos by Archana Risal Pokharel