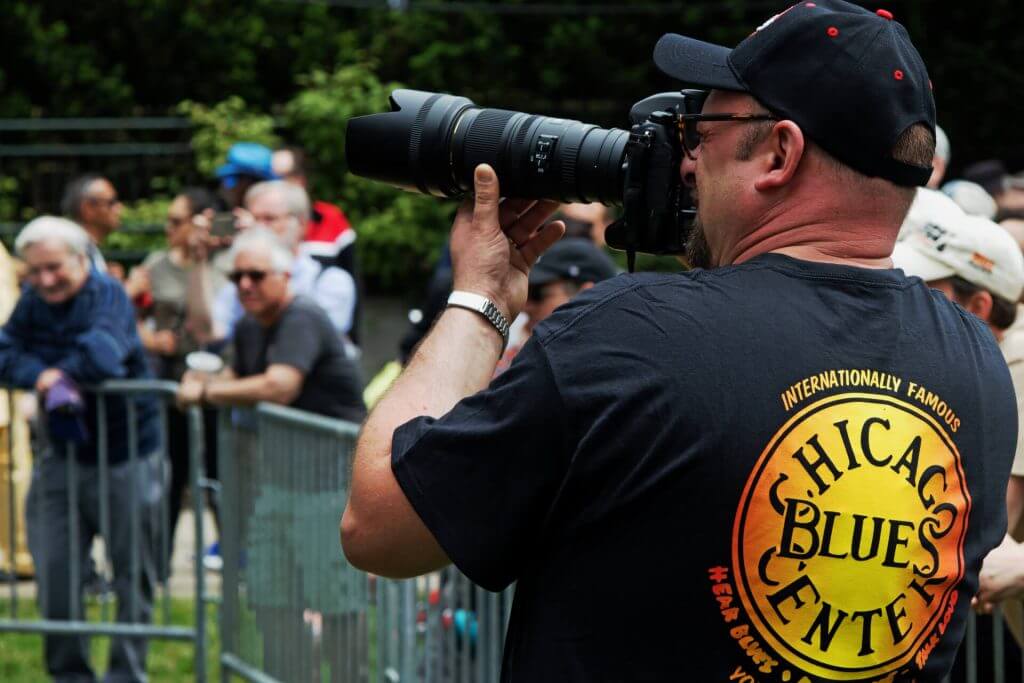 Belgian Blues writer, photographer, and tour manager Franky Bruneel was born in 1967. At the age of twelve, he started searching for the artists who wrote Elvis songs and found Little Junior Parker, Arthur Crudup, Big Mama Thornton, and Lowell Fulson. At the age of fifteen, Franky had radio shows on several stations and promoted blues to a wider audience. His show was called Back To The Roots as blues is the origin of contemporary popular music. The radio show ran on several stations at local and national level. In 1991, Franky started organizing Blues concerts, a link that brought American artists to Europe for short tours. In 1995, a modest fanzine called Back To The Roots was created based on a concert newsletter. What started as a radio show became a full-fledged glossy blues magazine. Back To The Roots is the only printed blues magazine in the Dutch language and is read in Belgium and the Netherlands. For more than two decades, Franky’s been a tour organizer and does European bookings for Rod Piazza & The Mighty Flyers and Mr. Sipp who he introduced to Europe. He is also the European agent for the Corey Dennison Band and Studebaker John & The Hawks.

When I discovered the original versions of ‘Mystery Train’, ‘Reconsider Baby’, ‘Hound Dog’ and ‘That’s All Right Mama’ as a child, a new world opened up. The music went so much deeper and was more intense than anything I had heard. I started exploring the Blues and the journey is still unfinished. Initially, purely musical aspects touched me; the conjuring rhythms of the Blues and the different ways a musician can be a virtuoso in Blues. Some succeed in making their instrument talk, cry, and scream and with very few notes they tell a lot. Others excel by varying their solos. The Blues has so many musical possibilities. Later, I learned that the voice is perhaps the most important instrument. As people get older, they start to think more about life and through the years I have developed a strong sense of justice on a political and social level. There are few other art forms that translate this feeling better than the Blues. When that happens in combination with a touch of bitter humor, I can totally identify with it. I discovered the Blues over forty years ago and the music has been an important part of my life.

Can you talk about your Blues magazine from Belgium: Back To The Roots?

There was no internet in 1995 and we started a printed newsletter to inform our audience about the concerts we organized. In addition, it contained Blues news and tips for new CDs. There was no Blues magazine in Belgium and readers appreciated our work. Befriended Blues writers joined our team. Little by little ‘Back To The Roots’ grew into what it is today. We produce five issues a year and we offer 64 pages of quality printing in full color. We pay a lot of attention to the quality of both the content and the photos. We bring Blues news, reports, background information, interviews, travel stories, reviews of books, CDs and DVDs, and the most extensive Blues concert calendar in the Benelux. We cover traditional Blues as well as various sub-genres such as Blues/Rock, Cajun & Zydeco, R & B, Soul and the occasional little bit of Gospel and Rockabilly. We do not cover stuff that is sold as ‘Roots Music’ or ‘Americana’ these days even though smart marketers often try to sell these genres to a Blues audience. It’s also worth mentioning that we don’t limit ourselves at all to what’s going on in the European Blues field. We cover the global Blues scene as the hotbeds of the genre are not exactly in Belgium or the Netherlands. We are the only printed Blues magazine in the Dutch language and we have a very loyal readership. Many subscribers who have been members since the first issue are still with us today.

Is there a Blues scene in your hometown?

I live in the Belgian city of Bruges and we have some places where live Blues is played every now and then. There used to be a reputable festival here, The Belgian Blues Night. ‘Back To The Roots’ has often collaborated with the city theater for the programming of American Blues acts. In fact, the same goes for the entire Benelux. We have a number of Blues clubs, some fine festivals, and the occasional programming of Blues in official cultural centers. Although the latter is not obvious, many official culture houses program Culture with a capital C and look somewhat down on the cultural experience of ordinary people. Here we don’t know about the Blues societies that you have in America. This kind of movement has not yet broken over here and there’s hardly any Blues on national radio. There are a lot of musicians and bands playing Blues in Belgium and the Netherlands, but only few of them sound really authentic. Just because you put on sunglasses with a crazy hat and you can imitate Jimmy Reed doesn’t mean you’re a Blues artist. This is of course a very personal opinion.

How is Blues received overseas?

The Blues has a lot of dedicated fans here. People often drive hours to see a good band at work. They check out concert calendars, look for good new releases, and like to talk about Blues music with each other. Blues fans are also very loyal to their favorite genre, but Blues fans can also be demanding. They keep looking for authenticity and when certain artists give their Blues a rejuvenation and mix it with other styles, the real Blues fans drop out. People sometimes talk about ‘The Blues Police’ and the word ‘purism’ sometimes gets a negative connotation as a result. In general, the Blues is also a kind of movement here and meeting like-minded people is just like coming home. I also have the impression that Blues lovers here really go to a performance to listen to the music. They are looking for some kind of a connection with the artists. You will not find a situation where a Blues artist is part of the scenery in a restaurant. American Blues artists love to come and play in Europe because they are usually highly appreciated and respected and get well paid.

You are also an agent for acts touring in Europe. Can you talk about this?

We’ve always loved helping make sure that some of the artists we write about in the magazine play here on our stages. The adventure started in 1991 when we paired a very popular local Blues band with a legendary Chicago Blues man. We invited Carey Bell and set up several tours for him. Over the years, a friendship has grown with many artists. For example, I’ve been doing all of Rod Piazza’s European bookings since 1997 and we discovered Jerry Waddel from Tennessee in the early 2000s. This soulful Bluesman became very popular in Europe, but unfortunately he died way too soon. ‘Back To The Roots’ has organized tours for Bob Corritore & The Rhythm Room All Stars with Tail Dragger and Mud Morganfield as headliners and for Kim Wilson and his Blues Revue. After seeing Mr. Sipp at the Chicago Blues Festival in 2014, I was determined to introduce him to Europe. Same goes for Dexter Allen. The following year I set up a double tour for both Mr. Sipp and Dexter Allen, each with their own band. Being on tour with two full American bands at the same time was a nice experience. They each played a long set so we had a full evening program with contemporary Blues from Mississippi. I also work with Studebaker John & The Hawks and I am the European agent for the Corey Dennison Band. 2020 would have been the best year for Corey in Europe with great festivals and concerts in the Netherlands, France, Belgium, Denmark, Germany, and the Czech Republic. Covid-19 decided otherwise. Hopefully, we will be able to continue these activities soon.

What is your favorite location to visit in the U.S. for Blues music?

I come to Chicago every year, but this year Covid-19 thwarted my plan. I don’t think there is another city in the U.S. where you can see live Blues every night of the week in so many different places. If you visit the clubs that are a little off the beaten tourist track, you can have a very authentic Blues experience. I hope the scene will recover after Covid-19. At the Chicago Blues Festival there are acts from many different sub-genres of the Blues and from all corners of America. Throughout a single weekend you see and hear many different impressions of the Blues so there is really no need to travel several times a year to different American regions to get an overall picture of the current Blues scene. Mind you, I speak as a European as a trip to the states is a serious investment. If I lived in America, I would probably also travel to Mississippi and Memphis once a year. A wish of mine is to visit the King Biscuit Blues Festival in Helena, AR and attend a Legendary Rhythm & Blues Cruise.

Where do you see Blues music going?

The popularity of the Blues is a wavy movement. Blues will never become a mainstream genre but there will always be acts that draw large audiences and raise awareness for the Blues. In this context, I love Larkin Poe! As long as young artists remain interested in authentic Blues and perform it with a respect for the tradition – even if they give the music their own original twist – the Blues will never disappear. We shouldn’t complain because nowadays there are so many young torchbearers for the Blues: Kingfish, Vanessa Collier, Jontavious Willis, Marquise Knox, Mr. Sipp, Corey Dennison, King Solomon Hicks, Jamiah Rogers, Selwyn Birchwood, and there are many more.

What else do you want to accomplish with your magazine?

Above all, I hope to be able to continue with it for a long time. It would be nice if in the coming decades the Blues produces a lot of great subjects to write about and if the next generation of readers would continue to be interested in Blues. ‘Back To The Roots’ is a hobby for me next to my full-time job in the Belgian Navy. I hope to retire in three years. From then on I will be able to dedicate much more time to the Blues. Continuing to strive for improvement and raising the bar on the quality of the magazine is a goal of mine. In the future I also want to bring more artists to Europe. I want to promote the Blues on an even larger scale. Of course, it’s always fun when you get a little recognition for it. I am thankful for the camaraderie I have with so many Blues artists. By the way, I’m very grateful for American Blues Scene doing this interview. It’s a great honor to be allowed to introduce ‘Back To The Roots’ in the homeland of the Blues. Also, getting official recognition from The Blues Foundation would complete the story.

Back to the Roots

Back to the Roots Brant Buckley Franky Bruneel
Share. Facebook Twitter Pinterest LinkedIn Tumblr Email WhatsApp
Previous ArticleDavid Poe Cuts to the Heart of the Matter with ‘Gun For A Mouth’
Next Article Robert Plant’s ‘Digging Deep: Subterranea’ Out Now