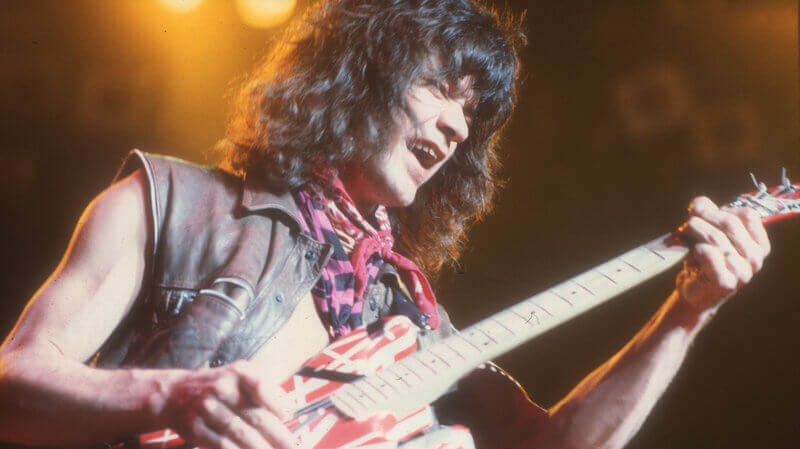 Edward Van Halen was born on January 26, 1955, in Nijmegen, the Netherlands, and moved with his family to California in the early 1960s. While growing up in Pasadena, Eddie and his brother, Alex, took classical piano lessons. By the time he was a teenager, he was proving to be an exceptional musician and had switched to guitar, Alex to drums.

The brothers formed Van Halen in 1974 with vocalist David Lee Roth and bassist Michael Anthony. Within just a few years, the band became wildly influential on the Los Angeles scene, in large part due to Eddie’s signature guitar sound.

In 1977, Kiss bassist Gene Simmons discovered them at a local club and footed the bill for their first recording session. Subsequently, Van Halen signed with Warner Bros. In 1978 the band released its eponymous debut album, featuring the smash hit “Runnin’ With The Devil.”

Van Halen followed with a prolific string of multi-platinum albums: 1979’s Van Halen II, 1980’s Women and Children First, 1981’s Fair Warning and 1982’s Diver Down. And in 1984, the band’s career catapulted into the stratosphere with 1984, which included “Jump,” “Hot for Teacher,” and “Jump,” MTV running a constant loop of the three videos.

Roth left the band in 1985 after recording his own solo album and was replaced with Sammy Hagar. Van Halen continued on in their success and put out several albums with Hagar as frontman. By the mid-90s, Eddie and Hagar clashed as Van Halen was sober and the new frontman was unapologetically not. Hagar recorded his last album with Van Halen in 1995. In 2004, he returned for a greatest hits release and tour.

Following Hagar’s departure, Roth also returned for a Van Halen reunion. After recording two songs and making an MTV Music Awards appearance, he left again and was then replaced by Gary Cherone of Extreme. In 2012, Roth was back again, and the band released A Different Kind of Truth, their first record with Roth since 1984. In May 2015, Van Halen opened the Billboard Music Awards with Roth, performing their classic “Panama.”

Van Halen was inducted into the Rock & Roll Hall of Fame in 2007.