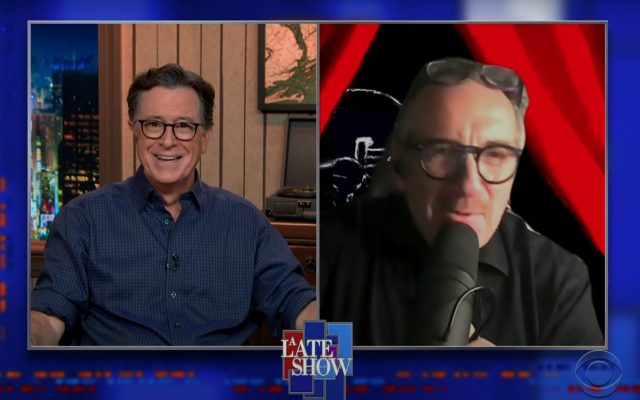 Elvis Costello releases his new album, Hey Clockface, tomorrow, October 30. This will be his first full-length release since 2018’s Look Now. Before the pandemic, Costello recorded several songs in Helsinki, alone in the studio and at the helm of every instrument.

Hey Clockface was recorded in Helsinki, Paris and New York and mixed by Sebastian Krys in Los Angeles. Of the Paris sessions, Costello states: “I sang live on the studio floor, directing from the vocal booth. We cut nine songs in two days. We spoke very little. Almost everything the musicians played was a spontaneous response to the song I was singing. I’d had a dream of recording in Paris like this, one day.”

The LP features the previously released singles “We Are All Cowards,” “No Flag,” “Hetty O’Hara Confidential” and “Party Girl.” Attractions/Imposters keyboardist Steve Nieve, as well as Bill Frisell and Nels Cline make guest appearances on the album.

The British GRAMMY-winning Rock and Roll Hall of Famer appeared on Stephen Colbert’s The Late Show last night where the two discussed the pandemic and his new Armed Forces comprehensive box set. He then did a bit of spoken word, followed by a performance of “Hey Clockface / How Can You Face Me Now?” joined by Late Show bandleader Jon Batiste on piano.

Watch both videos below.