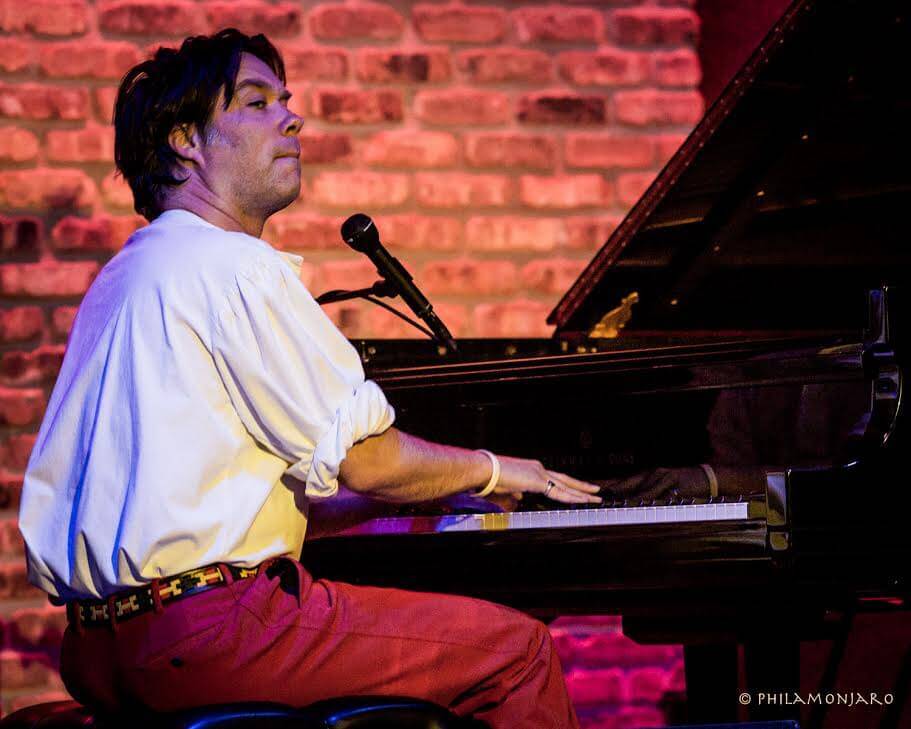 After last week’s exciting news that Rufus Wainwright has received his second GRAMMY® Award nomination in his career for Best Traditional Pop Vocal Album for his Unfollow The Rules,  the singer-songwriter announces Rufus-Retro-Wainwright-Spective! 2021 the virtual live-stream tour through all nine of his groundbreaking studio albums.

The tour will see the albums performed in chronological order with one album side performed for each date. Wainwright shares the dates for the last four albums, starting on Friday, January 8 with Wainwright performing the first side of his much-lauded album Release the Stars. More dates will be announced for the winter at a later time. Tickets for individual shows are $20.00 in advance and $25.00 day of show, and 4 show bundles are also available. Bundles come with the opportunity for fans to participate in intimate Q&A’s with Wainwright and other surprises. Purchase tickets here.

Wainwright was on the forefront of live-streaming with his IGTV Quarantunes Robe Recital series where each day he performed a song a day while playing in his bathrobe at his home. In June he upped the production with a performance of his new album Unfollow The Rules in a session at the old Hollywood Paramour mansion. Now with Rufus-Retro-Spective he takes a step further playing 45 minute concerts highlighting albums from his illustrious catalogue. Guitarist Brian Green and keyboardist/pianist Jacob Mann will accompany Wainwright in these concerts and fans will be treated to songs he has not played in many years with exciting new arrangements. On top of the songs from the albums, Wainwright will sprinkle in cover songs that fans can vote from over 100 that he has performed in the past, or has wanted to perform in concert.

Each album features a special guest as Wainwright’s micro-audience. The 2020 concerts featured an eclectic Hollywood mix of people ranging from Jamie Lee Curtis and Chris Guest to Darren Chris and Joel McHale. The 2021 shows will continue featuring a special guest per album.

Says Wainwright of this exciting tour, “I did not expect to have so much fun redoing my first 4 albums with Brian and Jacob on guitar and piano in October and November. So many songs I had not performed live in decades as I always thought they needed a large band but they actually hold up quite well in this very intimate living room setting.

I wasn’t sure how fans would react and whether anyone would buy tickets. Well, my fans have and I am incredibly grateful for their support and for the opportunity to go all the way on this road to my last album. I am so excited that Unfollow the Rules was just nominated for a Grammy and I would love to to actually end this retrospective as a Grammy winner. But even without I feel I have won a lot through this experience.”

Below are the dates for A RUFUS-RETRO-WAINWRIGHT-SPECTIVE 2021!

January 8 – Release the Stars: “From Do I Disappoint” You to “Rules and Regulations”

Release the Stars is the first album I self-produced. It was a milestone for me and I think set me up for writing my first opera and orchestrating it as I did a lot of the orchestrations myself on this album. A lot of it was recorded in Berlin in one of the most beautiful rooms in a former East Berlin recording studio. Berlin is a broken city that proved to be healing for me. I don’t even know how we are going to do “Do I Disappoint You” with our small band but I promise not to disappoint you. “Going to a Town” is probably the closest I come to writing a political song in the tradition of Joan Baez, Bob Dylan or any of the great musicians from the 60s and 70s who were such an integral part to the civil rights movement. It is sad that writing political songs is so out of fashion these days where our freedom is in danger more than ever.

I wrote “Not Ready to Love” a few weeks before I met my future husband. Writing songs is very therapeutic and once you get them right and poured the emotion into melodies and harmonies, you can release them and move on. I am so happy that I wrote that song when I did. “Tiergarten” from the previous show is the first song that is about him and he appears on “Sanssouci” which is part of this show.

I know this is maybe my most challenging album and quite a shock after the Want albums and Unfollow the Rules. They were in technicolor and Songs for Lulu is black and white not to say “bleak and white”. The songs are etchings whereas my previous albums were collections of multi-layered oil paintings. I worked on the piano arrangements over months and practiced the piano every day for hours to master them. It was around this time that my mother died and this was one of these moments where art and life truly are meant to run alongside each other for maybe longer than I had wished. I was alone on stage for this tour in a black dress with feathers and a long train (same dress as in the “Devils And Angels” video) with white, blue and black makeup. I was just as alone emotionally having lost my mother. There were shows on tour where I cried for the entire duration of the first half.

I won’t be attempting to play these arrangements again myself. I have asked a friend and wonderful pianist to accompany me on these songs. This is really how they are intended to be performed like “Lieder” with an accompanist and vocalist. It would take me too long to get them back into my fingers. “The Dream” is almost impossible for me to play just as it is impossible for dreams to become reality but then again, they do if you work hard enough. I am excited about singing these songs and not have to worry about hitting the wrong keys. These might be the most exciting shows of the whole retrospective for myself artistically.

I probably did not have more fun recording an album than ‘Out of the Game.’ I worked with Mark Ronson and felt like the next big pop star. Guess what, the big breakthrough didn’t happen. I realized I was already somewhere where maybe all these people who are breaking through will never get. I have been in this business consistently for over 20 years. I am still in this ocean of song and business but I am swimming and keeping afloat where a lot of others have drowned over the years already. This album is sort of a reminder for myself that the game is always continuing and you got to keep inventing your own rules. “Montauk” is the song that mentions my daughter for the first time and it is one of her favorite songs so it will be special to sing that now that she lives half her time with us.

“Candles” is the song that really deals with the death of my mom. Lulu was the album that accompanied her death but it takes a long time for emotions to pour into music and this is the song that helped me through her death the most and was written in response to it where the Lulu songs were written long before she passed. On the recording my entire family plays an instrument or sings from Lucy to Martha, Loudon to Anna McGarrigle. Most songs in this show are very much about male desire and love but it certainly takes a very different turn in the end. Give them what they want and then take it away is something I have always enjoyed doing.

February 19 – Take All My Loves: 9 Shakespeare Sonnets: From “When Most I Wink” to “Farewell”

Lyrics are the hardest for me to write, they definitely take the longest. Melodies come much easier. Writing songs to Shakespeare Sonnets was amazing as Shakespeare’s lyrics are just perfect. Not really able to do all these songs though as they were originally written for the Berliner Ensemble a German language theater company where Brecht/Weill’s Threepenny Opera premiered. Some of them are in German and some of them were written for the entire cast so need a chorus to perform them and I have not been able to clone myself just yet. I will keep on trying but I feel that musically I have really achieved inhabiting and expressing multiple personas with. But you will hear some of the Sonnets here that I hardly ever perform solo and in different arrangements than the ones that are on Songs for Lulu.

February 26 – Rufus at the Movies (Soundtrack Songs): From “Hallelujah” to “One More Chance”

Technically this show is not really part of the album retrospective but with every rule, there is a rule that it needs to be broken. Some of these songs have actually probably become my biggest songs and many people today know me as the guy who sang “Hallelujah” on the ‘Shrek’ soundtrack. But I also wrote songs for Disney, Brokeback Mountain and other mainstream and indie films so here is a bit of a buffet.

March 4 – Unfollow the Rules: From “Trouble in Paradise” to “Peaceful Afternoon”

This is the third version of these songs from my latest album. The record “Unfollow the Rules” is a condensed retrospective of my entire catalogue in itself. It brings back all the themes and presents them in a more concentrated, more essential way. The album is lush but if you would take one piece away the entire construction of the songs would collapse. This show ends with “Peaceful Afternoon” which for me is really the center song of this album finding peace and happiness at home, being content with where you are and of course it also sings about the place from which you will hear and see all of these 18 shows.

March 12 – Unfollow the Rules: From “Only the People that Love” to “Alone Time”

There is the full studio version of these songs on the album and a live version with string quartet from the Paramour Session, and now an even more stripped-down version of these songs. I love constantly changing the way these songs are heard and performed. Every great painter makes studies for their paintings and this is one of these studies that hopefully contains everything that the mature songs have. Hear song-writing and producing in the making. Our living room is where most of these songs were written. Where on my first and second album, I was yearning to transform into Icarus, to travel to Grey Gardens, to escape to Barcelona, to wander on 5th avenue in flip flops, with “Unfollow the Rules” I have arrived home, artistically and physically in a space that gives peace. After 18 shows I feel we all have a bit of a right to say that we came “home.” I hope you enjoyed the journey and feel it was a homecoming for you as well.