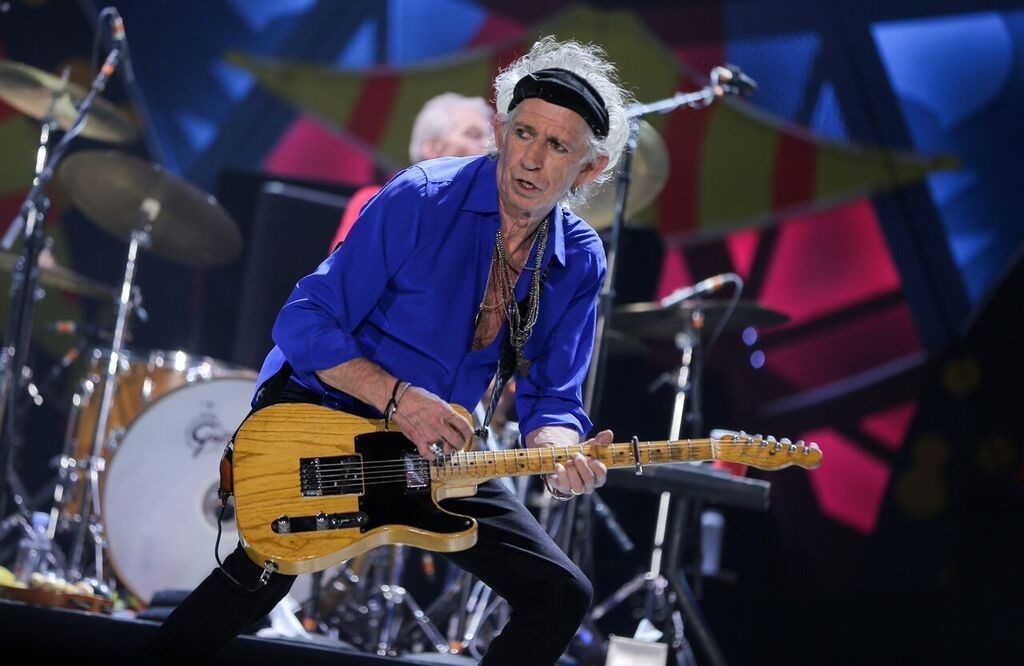 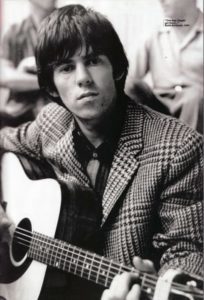 1. Guitar virtuoso Keith Richards began his love for music at the tender age of three. His grandfather, “Gus” Dupree, was a member of a jazz big band in England. It was Dupree who first cultivated Richards’ love for the guitar. He also gave the youngster his first guitar, placing it on a shelf that he couldn’t reach, and telling him that if he could attain it, he could keep it.

Richards devised a makeshift tower of books and cushions piled on a chair until he could climb high enough to reach the treasured instrument. He practiced at home, with his favorite records of the time, which included albums by Billie Holiday, Louis Armstrong, Ella Fitzgerald, and Big Bill Broonzy. At the age of 13, he saw the documentary film, Low Light and Blue Smoke, on British television. The image and sound of Broonzy, alone with a guitar, left a lasting love of the blues on the young teen.

2. Although obviously most famous for his career with the Rolling Stones, Keith has spent some quality time in the studio as a blues sideman as well. Some of the most famous blues albums, to which Richards has contributed, include John Lee Hooker , Mr. Lucky; The Neville Brothers, Uptown; Bo Diddley, A Man Amongst Men; BB King, Deuces Wild; Hubert Sumlin, About Them Shoes; Buddy Guy, Bring ‘Em In; and Les Paul & Friends, American Made World Played. Richards has also released three solo albums, and although he sang lead on 27 Rolling Stones tracks, only one of them charted – the song, “Happy,” from Exile on Main Street, hit #22 on the Billboard Hot 100.

3. There are over 3,000 guitars in Keef’s collection, but there are a couple that are his go to instruments. Both are Fender Telecasters; a 1953 named, “Micawber,” and a 1954 which he calls, “Malcolm.” He also has a trademark string setup for both axes. He only uses Ernie Ball strings, and these two guitars are always in five-string open tuning (G, D, G, B, D, with the low E string removed). The strings for these set ups are custom made by Ernie Ball, as far as the gauging goes, and are not for sale to anyone else.

4. Known as a master of the electric guitar, Richards is more than adept on acoustic guitars as well. In fact, the original recordings of the songs, “Jumpin’ Jack Flash,” and “Street Fighting Man,” don’t have any electric guitars on them. The iconic sound was created by Keef laying down several layers of acoustic guitar, in different tunings, that he filtered through a portable cassette recorder. Most nights, Richards was awake while everyone else in the hotel was asleep, and he developed this method so as not to disturb other guests.

5. Speaking of sleep, Richards claims to have written the guitar riff for, “Satisfaction,” in his sleep. A pretty amazing feat considering that he very rarely slept at all. According to his 2010 autobiography, Life, he claims to have only slept, on average, two nights per week during the Stones’ heyday. “This means that I have been conscious for at least three lifetimes,” he wrote. Nikola Tesla was known to only sleep two hours per night, and Thomas Edison slept for three. Leonard da Vinci, its said, slept for approximately 1.5 hours per day, but did it in intervals of 15 minute naps every four hours. This gained him about 20 years of added productivity to his 67 year life. We’re thinking Keith is on to something. His personal record is 9 days without sleep, at the end of which, he fell asleep standing up, crashing against the edge of a speaker, and waking in a pool of blood.

6. During his lifetime, and decades long career, Keef has had his share of injuries, and near misses. They began when he was just an infant. His mother and he evacuated their London neighborhood due to a Nazi bomb raid. They returned to their home to find baby Keith’s crib had been destroyed. There were at least three times he nearly died by fire. Once, he and famed session musician, Bobby Keys, accidentally set fire to a bathroom at the Playboy Mansion; again during the recording of Exile on Main Street, he and his girlfriend, Anita Pallenberg, fell asleep, Richards with a lit cigarette, which caught the bed on fire; and another time when mice chewing through the wiring of his Redlands Estate set the home ablaze. He’s also been electrocuted on stage, fallen from a palm tree, had a pile of books fall on him at his home library, and was poisoned while on tour in Switzerland, when someone put strychnine in his heroin.

7. Even trying to be good, he’s sometimes bad. While a teenager, Richards spent two years in the Boy Scouts. An avid collector, he claimed that the only reason he joined was so he could wear a knife. What he didn’t know, at the time, was that he had to accumulate several badges before gaining that “honor.” His days as a scout ended when he smuggled a couple bottles of whiskey into a Jamboree, and ended up fist-fighting other boys. He may have lasted longer, had one punch not missed its mark. He swung at another scout, and hit a tent pole, fracturing a bone in his hand. 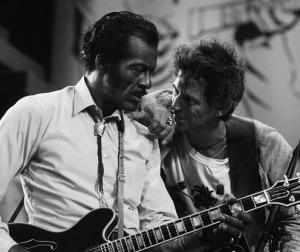 8. Keith Richards has received a few punches in his life as well. His most memorable was from none other than Chuck Berry. The story goes that after a show, Berry had gone to collect the night’s pay. Richards was in the dressing room and Berry’s Gibson ES model guitar was laid out on its case. It seemed to call out to him, Richards has said, so he picked it up and strummed a E chord. Berry came in yelling, “Nobody touches my guitar,” and promptly slugged Richards in the face. Berry had never forgiven Richards, and other British rockers for allegedly stealing his licks and making millions, although Richards is his #1 fan, and served as musical producer for the film, Hail! Hail! Rock ‘n’ Roll. Keith has said that he did receive an apology some months later, with Berry saying, “Keith, I didn’t know it was you.”

9. In his autobiography, Richards wrote, “I’m a good driver.” One may call that statement into question, considering that he failed his driver’s test three times, and eventually had his bodyguard take, and pass, it for him. Then, of course, there was the incident when he was driving back from a gig in Knebworth, England with his seven-year-old son, Marlon, in the back seat. Apparently Richards fell asleep at the wheel, and crashed his Bentley into a tree. Marlon and he sustained only minor injuries, but when police found LSD in Richards’ jacket, he was immediately arrested. “I mean, nobody’s perfect,” he later said. “At least we didn’t hit anybody.”

10. You don’t mess around with Keith. After the notorious Redlands drug raid that nearly landed Richards a year-and-a-half prison sentence, he found out that it was the British tabloid, News of the World, which was shut down in 2011 after several phone tapping allegations, that had tipped off the police. What was worse, was that it was his long-time Belgian chauffeur, who had contacted the paper. Richards was livid that the well paid employee could be bought off by a tabloid. Not long afterward, the driver’s legs were mysteriously broken. Richards’ only response, “As I heard it, he never walked the same again.”