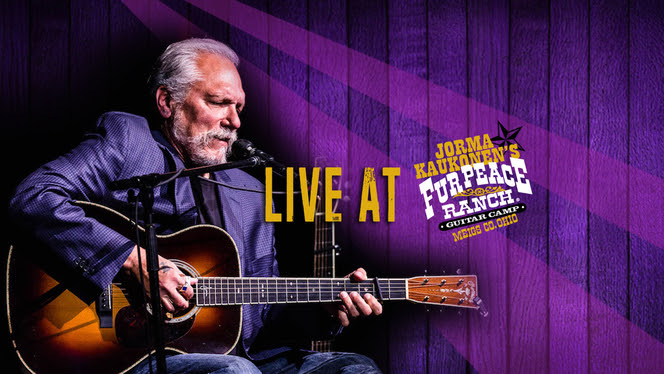 Jorma Kaukonen, a member of the Rock & Roll Hall of Fame and Grammy Lifetime Achievement Award recipient, is a founding member of two legendary bands, San Francisco’s ‘60’s band, Jefferson Airplane and his still-touring Hot Tuna. In a career that has spanned more than 60 years, guitarist and songwriter Kaukonen, is a highly respected artist who always adds new energy into his music, expressing himself cleanly and creating a unique sound.

The son of a State Department official, Kaukonen was born and raised in the Washington D.C. area with occasional extended trips abroad. In high school he met Jack Casady, the younger brother of a friend and a wonderful guitar player in his own right. Though they could not have known it, they began a musical partnership that has continued for more than 50 years.

Jorma eventually moved to California where he met Paul Kantner and was invited to join a new, not-yet-named rock band Kantner was forming with Marty Balin, to soon become the Jefferson Airplane. Playing spontaneous and unfiltered music with an individual expression of personality, Jorma’s style made a unique and enduring mark. He constantly looks to take his musical horizons further still.

Turning 80 on December 23, Jorma still travels the land performing solo, as Hot Tuna with bassist Jack Casady, and with many friends. Though the touring has temporarily been put on hold the music has not stopped! For the past 30 weekends Jorma has performed live Quarantine Concerts on YouTube.

Jorma livestreams from his Fur Peace Ranch Guitar Camp in the countryside near Athens, Ohio. Each Saturday night finds Jorma reminiscing both in song and story about his heroes, his friends, his guitars and the music. The concerts will continue through the holiday season at 8 p.m. EST on the Fur Peace Ranch YouTube channel. Be sure to tune in the next couple of Saturdays and wish Jorma a happy birthday on the Chat stream.

Listen to the single “Someone’s Calling” from John Hurlbut and Kaukonen’s The River Flows. Initially released only on vinyl as a Record Store Day exclusive Nov. 27, 2020, it is available in all formats December 25.

“There’s no better way to converse than to play music with a good friend! John and I have been talking for almost forty years and we welcome you to sit in on the conversation.” – Jorma Kaukonen