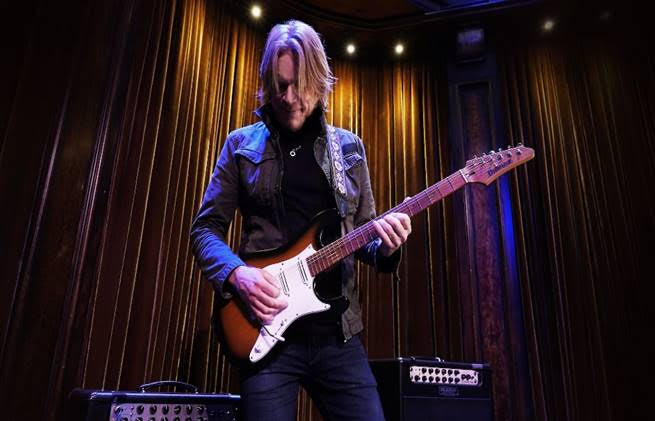 Andy Timmons has staged 65 Livestream performance via StageIt since the global pandemic began earlier this year. This coming Saturday on December 5, he looks back on his 2011 album release Andy Timmons Band Plays Sgt. Pepper, revisiting the repertoire and presenting the programming with Side 1 airing at Noon Pacific, followed by Side 2 at 6:00 P.M. Pacific.

Timmons will intersperse stories abut the arranging and recording process of his release a decade ago with new performances.  To attend click here. The top supporter of each broadcast will receive a one hour Skype lesson with Timmons, while the next five top supporters will be provided with a signed CD of their choice from his catalog.

Amongst the StageIt livestream events, Timmons continually looks back and forward when isolating the repertoire for these two shows every Saturday.  None carry a deeper connection to him personally than his love of The Beatles. A decade or so ago, he began recording instrumental renditions of these songs, inevitably recording an album, to which a global love for the performances followed. He shares, “Well, this goes pretty deep. I have a literally lifelong love of the Beatles from the cradle onward. I was born in ’63 and my oldest brother bought every single Beatles record along the way. Most of my earliest musical memories are Beatles related and to this day their body of work is like a security blanket in my life. Still comforting, still beautiful, still inspiring!”

Timmons has become an attraction over the course of the sixty-five StageIt shows performed. He offers, “The StageIt shows have been a blast for me as well as a tremendous challenge! I’ve essentially been producing two shows every Saturday, with many folks attending both shows. I feel a responsibility to make each show different with as little repetition as possible. In addition to revisiting my entire catalog as well as new, unreleased material, I’ve also done some “covers’ or tribute acoustic/vocal shows honoring the Beatles, Tom Petty and John Lennon.

“I suppose I consider my interpretation of the Beatles’ Sgt. Pepper record as a high point in my career.  It embodies everything I’ve learned about the guitar and how it can express great melody and structure in a linear performance. I’m very proud of how I was able to combine my love, reverence and understanding of the Beatles’ music with my passion for the guitar. It seems to transcend beyond the normal instrumental guitar-centric listener base to a broader music loving audience.”

On a tour in Italy in the late 2000’s, Timmons was playing an instrumental version of “Strawberry Fields Forever,” and it went over like gangbusters every night. The promoter took notice of this and suggested, “next tour, you should do a whole night of Beatles!” After an initial negative instinctual reply thinking there’s no way anyone could pull that off, it did get the wheels turning in his head.  He reflects, “I started experimenting with various tunes like ‘In My Life,’ ‘Help,’ and it became a hobby. My previous record Resolution was a landmark for me in that the record was recorded without overdubs. Just ONE guitar performance, bass and drums. I literally re-invented how I approached recording and playing the guitar (all this based on a comment from Vai…but that’s another story).

“So, now with this experience (and new-found inspiration) I was writing and arranging more in this style. Almost like a solo jazz guitarist like Joe Pass would play the melody supported by the harmony simultaneously. A bit more challenging in the rock guitar idiom as distortion is limiting with the amount of chord extensions you can include…but the sound is amazing when properly presented. The next track that fell under my fingers was ‘Lucy In The Sky’ where the keyboard intro laid beautifully on the guitar.

“Then the fleeting thought in my mind, ‘What if I could play the whole Sgt. Pepper record top to bottom on solo guitar?’ Over the next couple of years, Timmons would add slowly to the repertoire, painting from memory. His approach was to make the arrangements as personal and representative as possible of the original work, with arrangements emanating from memory. His mind would lead the direction, driven by a keen sense of the most noticeable and important element at any given point in the song whether guitar, a vocal, strings or simply a sound effect.  It became a really fun game for the guitarist as he approached attempting to capture the essence of the song in one linear performance.”

He goes on to share, “I should also point out that I wasn’t thinking of any commercial opportunities or even considering making a record…it was just the sheer joy of working on the arrangements. In 2009, the ATB went into the studio to record what would be the follow-up to 2006’s Resolution. Towards the end of the sessions, our engineer mentioned that due to a schedule change he had two extra days available, asking if we had any more songs to record. We had recorded everything, but drummer Mitch Marine suggested, ‘What about those Beatles arrangements you’ve been working on?’ And so, over the course of 2 1/2 days we knocked out the entire Pepper record!

“I kept about half of my live takes, and re-recorded the other half over the course of the next year. I nearly bailed on the project multiple times along way thinking it was not really working, and that it was an impossibility to capture what was in my mind.  I mean, this is freaking Hallowed Ground! And as a Beatles fanatic, I don’t always like Beatle covers. I didn’t take any of it lightly. Fortunately, I hung in there. And again, I wasn’t really concerned about any potential commercial success, I just really wanted the people to hear it…my fellow Beatles fans, especially my peers and heroes, because I just knew they would hear and appreciate every little nuance and detail I was able to capture.

“This music is in our DNA! The response was overwhelmingly gratifying. (Particularly Steve Lukather a.k.a. Luke’s response…he IS my biggest influence!) An odd response where comments I would get like “I’m not really a Beatles fan, but I dig this record!  It took a while to realize…” oh shit, not everybody is a Beatles fan!!” The bottom line, I could never have approached making a record like this in my earlier career. It took a lifetime of growth and maturity on the instrument to be able to capture these songs in the way that I did. I’m really proud of it.”